Editor's note: This article was originally published in the Winter 2016 issue of JHU Engineering magazine 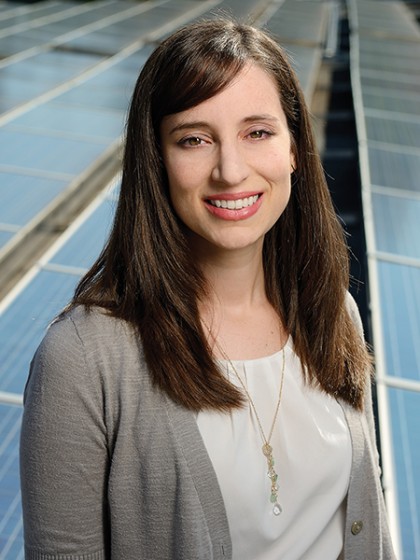 Imagine a clear solar paint that you could spray onto windows to capture the elusive energy of the sun. Or bright neon paints that could coat sports cars to convert unharnessed solar rays into electricity as the vehicles cruise along the California coast.

These products of the future are the visions of Susanna Thon, an assistant professor of electrical and computer engineering at Johns Hopkins University's Whiting School of Engineering. A physicist, Thon has converted an interest in quantum computing into a passion for the basic science behind nanomaterials. Specifically, she is interested in using quantum dots—found in sensors and LEDs—and metals such as silver, gold, and aluminum to capture solar energy in flexible liquids, such as paints or films, and converting it to electricity.

Today, conventional silicon solar cells—used in brittle, flat panels mounted upon rooftops—are capable of absorbing and converting about 25 percent of the energy in the sun's light rays, mostly in the visible wavelengths. Almost half of the sun's untapped energy store resides in the invisible infrared band—those harmless, longer wavelengths used in fiber-optics telecommunications, night vision, and thermal imaging.

Materials such as colloidal quantum dots—nanomaterials composed of tiny chunks of semiconductors—can be engineered to absorb energy from many wavelengths, even the elusive infrared. But they aren't good at transporting energy as electricity.

In the basement of Barton Hall, in her NanoEnergy Laboratory, Thon has set out to solve this scientific conundrum. On a recent day, an undergraduate and graduate student in the eight-member lab made a solar cell by using a syringe to dispense a brownish film on a glass slide. The liquid contained trillions of lead sulfide quantum dots. Thon added layers of different materials, like a seven-layer torte cake, to optimize the solar cell's absorption and conversion properties.

"The different layers are needed for the solar cells to work electrically," Thon says. "But people haven't thought about using these same layers as optical layers, too. It turns out, by changing thickness, you can change the optical properties of the whole device as well."

Thon postulates that metals in nanoparticles could essentially turn themselves into tiny "optical antennas" that could localize light to increase the energy absorption of surrounding materials. She sees great promise in these hybrid materials, and she has submitted an academic paper, currently under review, detailing the potential.

"It's easy to engineer your material to do one thing or the other," Thon says. "We want to do both."