Since 2006, the number of industry-sponsored clinical trials studying the benefits and harms of medical treatments has risen dramatically while the number of clinical trials funded by the National Institutes of Health has fallen substantially, according to new Johns Hopkins Bloomberg School of Public Health research.

The findings, published in the Dec. 15 Journal of the American Medical Association, suggest a growing influence of clinical trials being conducted by companies with a vested interest in the outcome and a dilution of the impact of government-funded trials, the researchers say. Results from NIH-funded clinical trials often provide the basis for prevention and treatment recommendations.

"My concern is that independent trials are on the decline and that means we have less high-quality data to inform public health that are not influenced by commercial interests," says study leader Stephan Ehrhardt, an associate professor in the Bloomberg School's Department of Epidemiology. "When I am doing a government-funded trial comparing two treatments, I start with the assumption that both treatments are equal. I don't have a vested financial interest in the outcome.

"But when I am a drug company testing my new product, my objectivity can be compromised by the company's bottom line since it costs me millions of dollars to develop and test my product to get it on the market. It might be difficult for me to be completely objective. The stakes are very high."

For the study, Ehrhardt and his colleagues searched ClinicalTrials.gov for "interventional study" and then searched by funder type for trials registered between 2006 and 2014. The number of newly registered industry-sponsored trials increased 43 percent over the time period, from 4,585 in 2006 to 6,550 in 2014. The number of newly registered NIH-funded trials decreased 24 percent over the same period, from 1,376 in 2006 to 1,048 in 2014. Both NIH and industry trials are required to be registered if researchers intend to publish the results. ClinicalTrials.gov is the world's largest online registry.

Clinical trials are research studies conducted in human subjects. Trials take many forms. In general, trial participants agree to be randomized to receive either a new therapy or a conventional therapy (or placebo). Some trials test three or more interventions. While many trials test new drugs, trials can also test treatment approaches (medical therapy versus surgical therapy) or lifestyle modifications (one diet versus another). Pharmaceutical companies generally test their own products.

Ehrhardt says he believes that the decline in NIH-funded studies can be traced to two things: Flat NIH funding (the 2014 budget was 14 percent less than in 2006, after adjusting for inflation) and greater competition for these limited dollars from other, relatively new research areas such as genomic research or personalized medicine studies.

"We need a discussion on how to best allocate our health-related research budgets," Ehrhardt says. "What best informs public health? It's probably clinical trials in large populations, such as testing to see if a reduced-salt diet reduces blood pressure. That study changed the way people eat and helped to reduce hypertension in many people. Industry would never do that. They'd have no interest in a reduced-salt diet. There's no money in that." 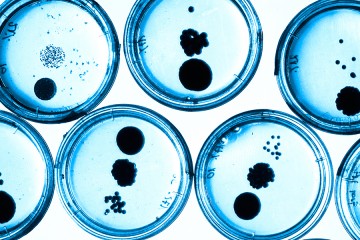 JHU No. 1 in research spending for 36th year