Johns Hopkins leads U.S. in research spending for 36th year in a row

$2.24B spent on medical, science, engineering research in FY2014

That total R&D expenditure in 2014, the most recent fiscal year for which nationwide data is available, was 3.4 percent larger than Johns Hopkins' research spending in 2013, according to the annual National Science Foundation report on institutional R&D. 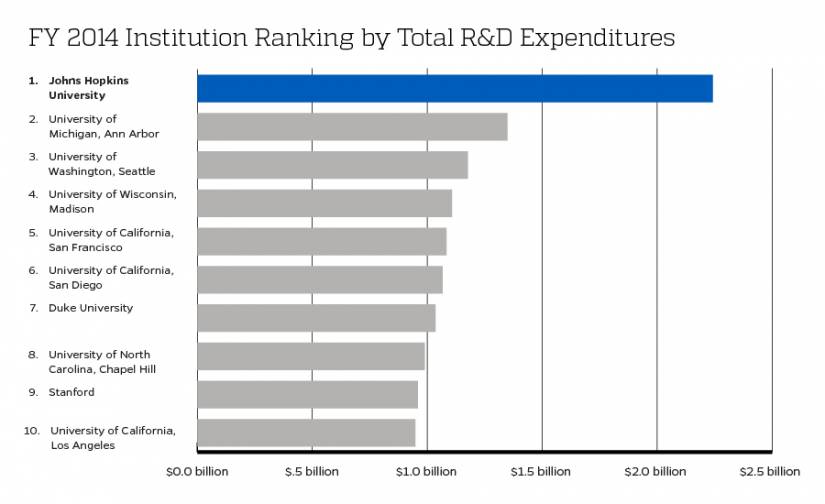 The NSF also again ranked Johns Hopkins first on its separate survey of research that is federally funded. The university spent $1.95 billion in 2014—also a record—on projects that were sponsored by NSF, the National Institutes of Health, NASA, the Department of Defense, and other federal agencies.

Federal research expenditure at Johns Hopkins jumped almost 2.7 percent in 2014, even as the total of R&D backed by the federal government at all U.S. institutions fell almost 3.9 percent.

"Johns Hopkins continues to attract significant financial support for work that benefits humanity, makes the world a better place, and grows our understanding of our cosmos and ourselves," said Denis Wirtz, the university's vice provost for research and a professor of chemical and biomolecular engineering. "That funding also provides added strength for the economies of Baltimore and Maryland, where the university and Johns Hopkins Medicine constitute our largest private employer."

At Johns Hopkins, research and development money supports investigations into everything from how the universe began to how babies learn. In 2015, Johns Hopkins scientists and engineers operated the first spacecraft to visit Pluto and reported progress on finding and eradicating dormant HIV in infected cells. They designed improved protective gear for doctors and nurses caring for Ebola patients, and studied threats to ocean ecosystems from accumulation of mercury in dolphins and an accelerating buildup of carbon dioxide.

Johns Hopkins has led the NSF's total research expenditure ranking each year since 1979, when the agency's methodology changed to include spending by the Applied Physics Laboratory—a research-focused division—in the university's totals. APL reported $1.254 billion in total R&D expenditures in FY 2014, $1.214 billion of that federally funded.

In fiscal year 2002, Johns Hopkins became the first university to reach the $1 billion mark on both the total and federal R&D spending lists, recording $1.4 billion in total research and $1 billion in federally sponsored research that year. The total funding ranking includes research support not only from federal agencies, but also from the state, foundations, corporations, and other sources.

Johns Hopkins research is also supported by the return on investment made in past discoveries. In fiscal 2014, Johns Hopkins reported earning $16.5 million by licensing patented technology, a figure that increased to $17.9 million in 2015. The university also spun off 13 new companies and received 92 new patents in 2014, figures that increased to 16 and 112 in the most recent fiscal year.

The largest components of Johns Hopkins R&D spending in fiscal 2014 were in the fields of engineering, at $935 million; and the life sciences, at almost $863 million.

The decrease in federal research funding has been particularly hard on young scientists, Johns Hopkins President Ronald J. Daniels argued in an article published in January in the journal Proceedings of the National Academy of Sciences. 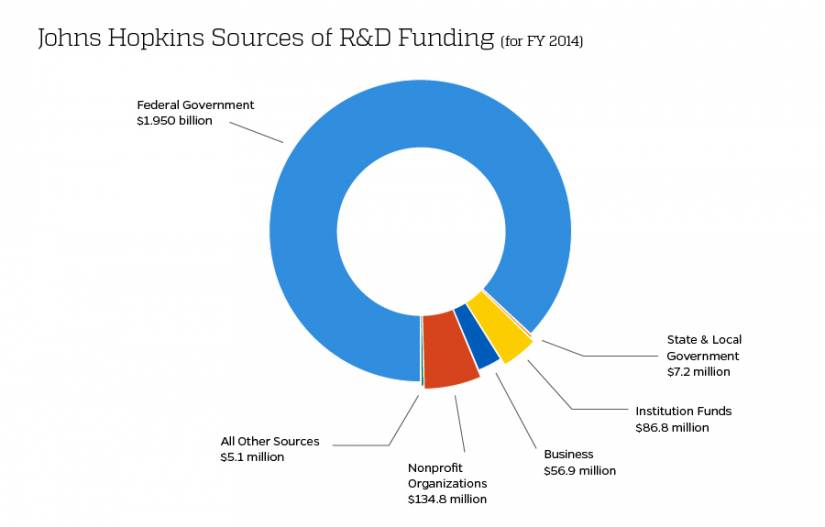 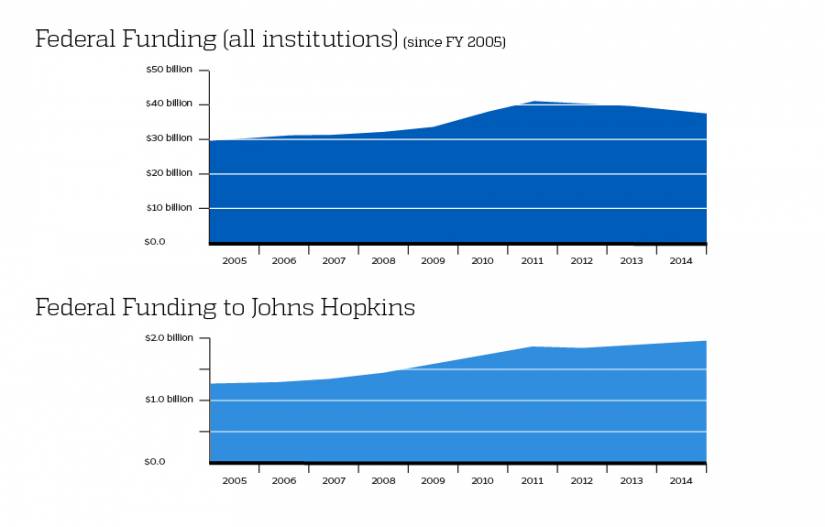