Research traces cause of organ dysfunction in Down syndrome

While most Down syndrome research has focused on the brain, a new report by Johns Hopkins University biologists uncovers how the disorder hampers a separate part of the nervous system that plays a key role in health and longevity.

Scientists studying the condition have mostly concentrated on the central nervous system, but Rejji Kuruvilla, an associate professor in the Johns Hopkins University Department of Biology, said that leaves out a lot. 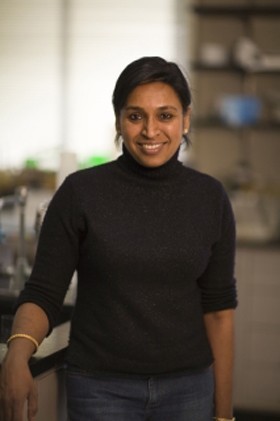 "There's been a whole aspect of the nervous system that has been ignored in Down syndrome, and perhaps in other neurological disorders," said Kuruvilla, the co-author of the Nature Communications paper who runs the lab where the research was conducted. The lead author among eight collaborators is Ami Patel, who has since moved to Northwestern University after earning her doctorate in biology at Johns Hopkins.

Down syndrome is a genetic condition characterized by impaired physical and cognitive development. The peripheral nervous system has no known role in intellectual ability, but it does regulate organ function including heartbeat, blood pressure, and blood glucose. Peripheral nervous system impairment could contribute to heart disease, diabetes, and immune disorders that are associated with Down syndrome.

One of the most common genetic disorders, Down syndrome is caused by the appearance of a third copy of chromosome 21. It appears in one of nearly every 700 babies born in the United States; roughly 400,000 Americans are estimated to have the disorder.

While the connection between Down syndrome and peripheral nervous system disease has been known for some time, the phenomenon has not been understood at the molecular and cellular level. Kuruvilla's lab pursued the question by examining mice engineered to approximate a human Down syndrome genetic profile as well as studying human organ tissues from Down syndrome infants.

In the mice and in human pancreatic and spleen tissue, the scientists found stunted peripheral nerve growth early in life. The question was why.

The research focused on nerve growth factor, or NGF, a protein identified in the 1950s—the two scientists who made the discovery later won a Nobel Prize—that regulates peripheral nervous system development.

Kuruvilla's lab group, which has been studying the peripheral nervous system for years, found that abundance of a particular gene product in Down syndrome puts a brake on NGF's actions in fostering nerve development. The culprit emerged as a gene, RCAN1, which in Down syndrome appears in three times the number that would be found in normal chromosomes. This gene regulates a protein, calcineurin, that enables NGF to stimulate nerve growth and also support neuron survival. In a mouse model, tripling RCAN1 alone caused the loss of neurons and nerve growth; reducing the extra dose of RCAN1 improved survival of neurons and nerve development.

Kuruvilla said the finding raises other questions that her lab plans to pursue. One is how RCAN1 affects neurons in a portion of the brain called the basal forebrain, which also responds to NGF. That brain area deteriorates in Alzheimer's disease patients.

And there is the question of possible treatments, given the array of medical conditions—including cardiovascular problems and hypertension—associated with peripheral nervous system dysfunction in individuals with Down syndrome.

"When you think about therapeutic interventions that could affect life quality, it's important to not ignore this important aspect of the nervous system," Kuruvilla said.