Johns Hopkins University President Ronald J. Daniels and Ronald Peterson, president of The Johns Hopkins Hospital and Health System, are among the finalists for The Baltimore Sun's annual Marylander of the Year distinction. 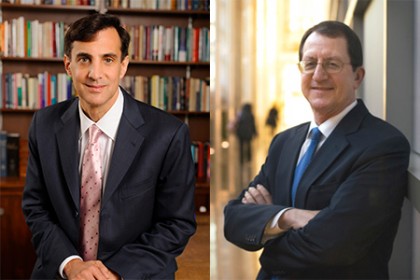 Daniels and Peterson, nominated together for their efforts to improve Baltimore's communities and economy, are among five finalists.

After April's riots, Johns Hopkins Hospital and Health System President Ronald Peterson became determined to help Baltimore recover with the thing it needed most: jobs. His plan for hospitals to create 1,000 positions with good salaries and opportunities for advancement got trimmed back by state regulators, but it will still do enormous good. Meanwhile Johns Hopkins University President Ronald Daniels has followed up on his work to engage the communities around the Homewood campus with highly regarded initiatives to hire ex-offenders and boost local businesses. Hopkins has often been viewed by Baltimoreans as an island in their midst, aloof and insensitive to the community's needs. Messrs. Peterson and Daniels appear determined to change that.

The other nominees for the honor are Rev. Donte Hickman of the Southern Baptist Church, who "has emerged as a leading voice calling for Baltimore to see the unrest following [Freddie] Gray's death as a wake-up call;" Maryland Sen. Barbara Mikulski, who announced in March that this U.S. Senate term, her fifth, would be her last; State's Attorney Marilyn Mosby, who brought charges against the six police officers involved in Gray's arrest; and Under Armour CEO Kevin Plank, whose company recorded its first ever $1 billion quarter in 2015 and who announced long-awaited development plans for the more than 100 acres of land he's amassed in Port Covington.

The winner will be announced at the end of December. Readers can vote at baltimoresun.com.