Award-winning author Ta-Nehisi Coates received three standing ovations during his talk at Johns Hopkins University's Shriver Hall on Thursday evening. Members of the audience broke in during his talk to applaud as well, as if it were the State of the Union address, and Coates the president. 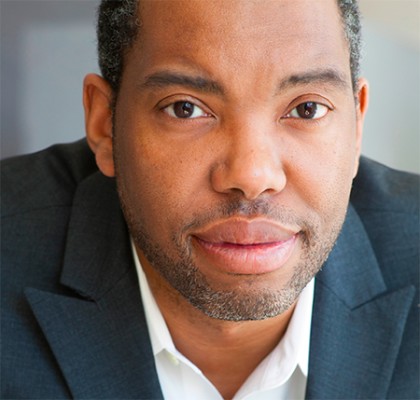 The appearance came just a day after Coates' 2015 book, Between the World and Me, received the National Book Award for nonfiction and about six months after his spring talk at JHU, which followed the April unrest in Baltimore. His earlier book, The Beautiful Struggle, was the suggested JHU Book Read title for first-year Johns Hopkins students.

Coates' talk centered on Between the World and Me, which Coates explained is an exploration of the experience of raising a child in a world in which racism is systemic and persistent. Addressed to his son, the book also relates the story of Coates' friend, Prince Carmen Jones, who was killed after being mistakenly identified as a suspect and followed by a plainclothes police officer in an unmarked car.

"There simply was no way for me to separate the fact that Prince was black from the way he died," Coates said. "We made a decision to group people in a similar box. Suspect is a black male—that then means that all black males are suspects. … It's been the working theory in most of my journalism, in most of my work: How did we get that box?"

The perceived criminality of black people, and the resulting policies that, in effect, build racism into American society were the themes of Thursday's talk.

Coates, a Baltimore native, recalled the high school student in South Carolina who was violently thrown from her seat and assaulted by a school officer while a school administrator—and a classmate armed with a camera phone—watched. When the video surfaced, it sparked outrage, but also begged the question from some: What did she do to deserve it? The question, Coates argued, should be: Why was it the school's policy to have officers there in the first place?

Coates, a national correspondent for The Atlantic whose essay "The Case for Reparations" won the George Polk Award for commentary, explained that the perception that black people are predisposed to violence is not a new idea.

"It began with the founding of our country," he said, citing laws like the Fugitive Slave Clause in the Constitution and the 60 criminal acts punishable by death if perpetrated by a black person in Virginia during the Civil War. "If you go back and look at the laws as they're formalized, you can actually see race being created."

In a particularly powerful moment, Coates discussed terrorism and the recent attacks in Paris, the city in which he lives. He then drew a connection to the Jim Crow era following the emancipation of slaves, calling it a "century-long terrorist campaign."

"That is what lynching is," he said. "It's terrorism—it's attempting to effect political change by killing people." The statement was met with applause.

Imposing criminality on black people is a part of American heritage, he said, nothing that even American "saints" like Harriet Tubman, Frederick Douglass, and Martin Luther King Jr. could escape. All three were regarded as criminals in their time, Coates said.

Questions asked by the audience after the talk brought up a multitude of issues, some for which Coates did not provide comment.

For example, when asked about activism by a member of JHU's Black Student Union and by actress Sonja Sohn (best known for her role on The Wire), Coates demurred both times, saying "the job of the activist and the job of an author are very different." He suggested tracing the incidents that incite protests back five steps—asking "why, why, why, why, why"—to get back to the policy that made the event possible.

Ultimately he had made a different choice from the activists, he explained.

His writing, he explained, is a selfish act, informed by extensive research and reading. "It is my intent to satisfy my curiosity first and foremost," he said. "Then I'll tell you about it."