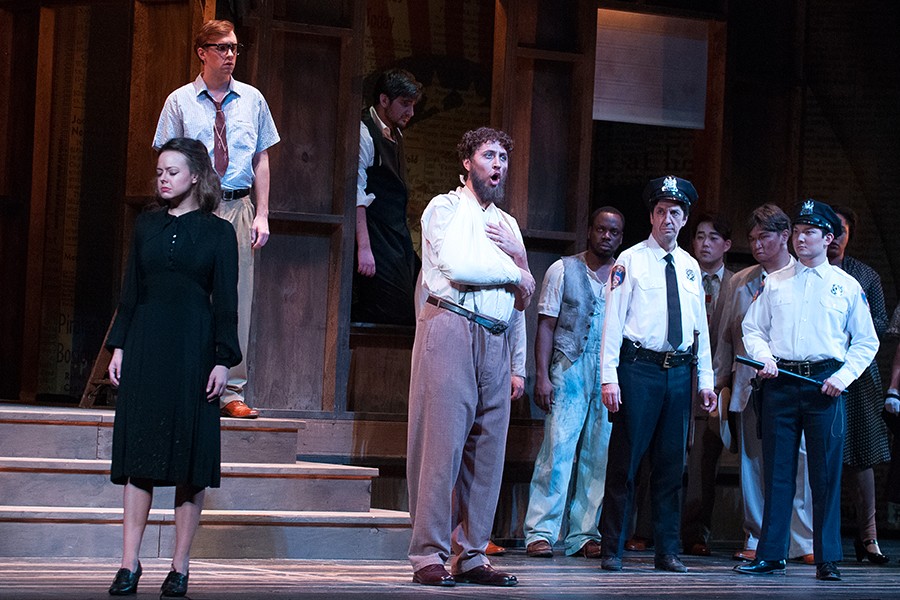 Rising three stories above the Lyric Opera House stage, a dusty Baltimore brownstone bustled with activity. Through large open windows, the audience could see a woman washing dishes, a young man leaning out to talk to folks on the street, and people moving from room to room. Visible through one window was a gleaming brass bed frame.

The Peabody Opera Theatre and the Peabody Symphony Orchestra joined to present the jazz opera tragedy Street Scene for two performances this past weekend. An adaptation of Elmer Rice's Pulitzer Prize-winning play of the same name, Street Scene was composed by the German composer Kurt Weill with lyrics by Langston Hughes. It is a tragedy following a group of families living in a tenement building on two sweltering hot days in June 1946.

"Although originally set on the Lower East Side of New York, Street Scene could just as easily be set in Philadelphia, Baltimore, or any city in which immigrants of varied backgrounds are thrown together to make a community," the opera's director, Kristine McIntyre, wrote in the playbill about the change in location.

The ensemble cast, with 23 principal roles, a chorus, extras, a children's chorus, and a live dog, ambitiously presented the lives of families in the American melting pot. As they strive to make ends meet, the characters face discrimination, extramarital affairs, alcoholism, evictions, and domestic abuse.

The Peabody Symphony Orchestra, directed by Maestro Steven White, performed the musical score that combined blues and jazz numbers with traditional opera. The lilting music transitioned smoothly between the genres, creating a melting pot effect to the music, as well.

Peabody graduate student Fitzgerald St. Louis, playing the tenement's maintenance worker, belted out "I Got a Marble and a Star," a slow-moving blues tune sung from a seat on a dented metal trashcan. A pair of lovers played by graduate students Elizabeth Sarian and Thomas Hochla dance a jitterbug, "Moon-faced, Starry-eyed," on the street before tap dancing upstairs to bed. Senior Shayna Jones, playing Anna Maurrant, transformed the soulful aria "Somehow I Never Could Believe," expressing the excitement of finding love, only to discover that with time and domesticity, "greasy soap-suds drown our wishes."

Rebecca Wood, playing Rose Maurrant, captures the emotional experience of a young woman forced out of her home by incredible violence. Vocally, Wood said, the opera is "just as challenging as foreign languages." Indeed, it is just as challenging for members of the audience, who were aided by projected captions of the lyrics.

Performing in English, however, gave the cast the ability to perform more fluidly and act with more intuition. Wood described it as an opportunity "to let my brain go, at least in the language department, and sing to my audience with the full attention of my heart."