Interdisciplinary project is focus of short film 'Mysteries of the Kylix'

Re-creating Ancient Greek Ceramics, the spring 2015 undergraduate class designed by Sanchita Balachandran, was recently featured at Archaeology, the magazine of the Archaeological Institute of America.

Balachandran, the Johns Hopkins Archaeological Museum's curator/conservator, organized the class as an intensive, interactive practicum in investigating both the cultural significance of the museum's collection of Attic red-figure vases, which date from ca. 520–470 BCE, and the skilled labor that produced them. Over 14 weeks, Balachandran had the students document their scholarly and practical research, conducted under the guidance of Matthew Hyleck, a ceramic artist at Baltimore Clayworks.

The class's work has been featured on local National Public Radio affiliate WYPR and in JHU's Gazette. It is also the subject of an 18-minute film titled "Mysteries of the Kylix," which follows the semester-long archaeology experiment that allowed the students—as Balachandran says in the film—to understand that "we're so close to figuring out so little" about these ancient ceramics. "Kylix"—directed by Bernadette Wegenstein, filmmaker and research professor and director of the Johns Hopkins Center for Advanced Media Studies, and shot by filmmaker Allen Moore—shows the challenges the students encountered in understanding the clay materials, how they built a kiln in a best-guess attempt to create something similar to what ancient Greek potters may have used, and the firing process that created their finished pieces.

"Mysteries of the Kylix" was funded by the Program in Museums and Society and the Andrew W. Mellon Foundation, with additional support from the Johns Hopkins Archaeological Museum and the Center for Advanced Media Studies. 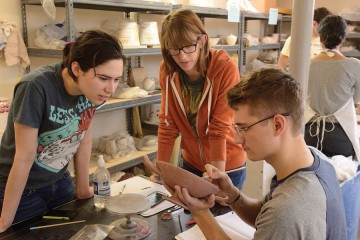 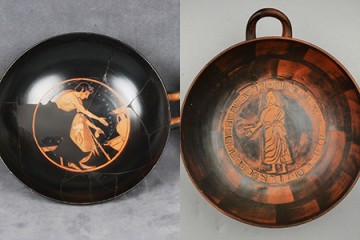