Students from across campus and around the world gathered at Johns Hopkins University this weekend for the first-ever MedHacks hackathon, where in a span of less than 48 hours they attempted to dream up and create innovative solutions to some of today's most pressing medical challenges.

The student-run event—similar to HopHacks, a student-run hackathon that debuted two years ago—began Friday evening and ran through Sunday afternoon at the Bloomberg Center on JHU's Homewood campus. It attracted more than 400 participants, event organizers said.

"Advancements in medicine often come from technology, but there is a disconnect between computer scientists and doctors," said Jack Ye, a first-year biomedical engineering student at JHU. "This event brings technology and medicine together."

Teams worked round the clock on a variety of problems from the healthcare world—some faced by developing countries, and some faced by the medical industry in the U.S. Professionals from the medical, entrepreneurial, and technology industries provided feedback.

"Compared to research, you have to cut your losses much sooner and move on to achieve your goal," says John Muschelli, a PhD student in Biostatistics at Johns Hopkins. "It could get pretty hairy in the midnight hours."

Teams created apps, wrote code, and built prototypes of medical devices. On Sunday afternoon, 10 teams presented their solutions before a panel of judges who selected first-, second-, and third-place winners based on technical difficulty, creativity, and impact.

The team that captured first place proposed using ultrasound acoustics to detect deep vein thrombosis, a dangerous condition that occurs when a blood clot forms—typically in the legs—that can detach and block blood flow to the heart or lungs. Team members developed software and a prototype of the device to monitor blood flow and ran test trials on a straw wrapped in meat to simulate vein and muscle tissue. The winners received a cash prize and a booth at DC TechDay.

The team that took third place came up with a way of streamlining the process hospitals use to donate medical equipment to healthcare providers in developing countries.

Other projects included wearable devices configured to monitor cardiac activity, an app used to upload lab test results and initiate video chats with a physician, and photo-imaging software to verify patient identity in areas of the world without standard forms of ID.

Editor's note: A previous version of this article misstated the relationship between MedHacks and HopHacks and the number of participants in the MedHacks event. 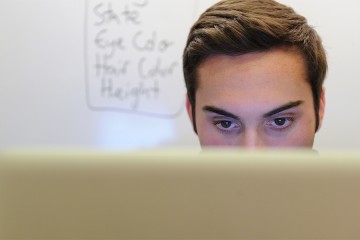