Before launching into the meat of his talk, human rights expert Len Rubenstein referenced a widely circulated image of the lifeless body of a 3-year-old Syrian boy that washed up on a beach in Turkey earlier this month. 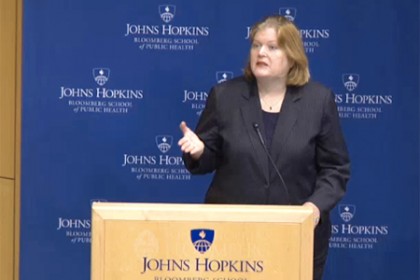 Image caption: Anne Richard, assistant secretary in the Bureau of Population, Refugees and Migration at the U.S. Department of State

The boy, Aylan Kurdi, drowned along with his mother, 5-year-old brother, and nine others after their boat capsized on a perilous passage to the Greek Island of Kos. The family was seeking refuge in Europe from their war-torn home in Syria. The image of the boy—lying face down in the sand, as if asleep, dressed in blue shorts and a red T-shirt—has become a powerful symbol of the horrors of a mass exodus the likes of which the world has not seen since World War II.

Millions of Syrians, many of them children, have fled their homes since the country's civil war erupted in early 2011, sparked by nationwide protests against the government of President Bashar al-Assad, whose forces responded with violent crackdowns. In recent months, the crisis has escalated, with thousands attempting to enter European countries on a daily basis. Germany alone will reportedly take in 1 million refugees this year, most of them Syrians, as roughly 1,800 enter the country each day from the Austrian border. Some refugees have perished en route. Some have been turned away. Many of those who have reached their intended destinations face an uncertain future.

Rubenstein and other human rights and public health experts gathered Monday at the Johns Hopkins Bloomberg School of Public Health to discuss this ongoing humanitarian disaster and consider solutions. Anne Richard, assistant secretary in the Bureau of Population, Refugees and Migration at the U.S. Department of State, served as keynote speaker for the symposium—titled "The Syrian Refugee Crisis: Searching for Solutions"—which was co-hosted by the Center for Refugee and Disaster Response and the Center for Public Health and Human Rights.

An archived webcast of the entire event can be viewed on the Johns Hopkins Ustream channel.

Rubenstein, a lawyer and director of the Center for Public Health and Human Rights, began by illustrating the human toll of war. Up to 250,000 people have died in fighting in Syria in the past four years, he said, nearly 90,000 of which can be characterized as violent, civilian deaths—those killed in air attacks, mortar attacks, kidnapping and torture, and by other means.

"You can't get caught in the crossfire and end up with these kinds of numbers," Rubenstein said. "These are the results of targeted attacks on civilians, almost all by the hand of the Assad regime."

Many, he said, have died or been injured from barrel bombs, oil drum-sized devices laden with shrapnel and explosives dropped from helicopters onto refugee camps, bakeries, even hospitals. The World Heath Organization estimates that more than 1 million people have suffered traumatic injuries during the past four years in such attacks.

The violence, Rubenstein said, has escalated in the past six months. Only 41 percent of hospitals in the Middle Eastern country are now fully functioning. Many have been destroyed, and some are simply inaccessible due to violence in surrounding areas.

"People are afraid to come, as they see hospitals as the most vulnerable place to go. The medical community itself has been traumatized," Rubenstein said. "I asked [health care workers] what they need, and they said they need everything, but above all what they say is to stop the bombs. It's a mistake to focus solely on the refugee crisis, as we have to figure out a way to protect people from dying."

Existing health care facilities are short on supplies and not fully staffed as aid struggles to reach its intended destination. Basic primary care and the treatment of chronic conditions have been supplanted by the overwhelming need for trauma care, Rubenstein said. The Syrian American Medical Society Foundation estimates the number of preventable deaths at between 200,000 to 600,000. "Stunning numbers," Rubenstein said. "That's why people are going to Europe."

Nearly 11 million Syrians have been displaced from their homes, including seven million within the country and another three million who have fled to Syria's immediate neighbors: Turkey, Lebanon, Jordan, and Iraq. Hundreds of thousands more have declared asylum in Europe; Germany has pledged billions to help resettle those who arrive at their borders. The United States, to date, has taken in 1,500 Syrian refugees, but that number could grow significantly as the Obama administration recently pledged to take in at least 10,000 Syrian refugees next year and increase the number of worldwide refugees the U.S. accepts each year to 100,000 by 2017 (up from the current annual cap of 70,000).

Rubenstein and others at the symposium said that one reason for the depth of the crisis is that the United States and other Western nations have been "living under a rock" the past four years with regards to the Syrian civil war.

Courtland Robinson, a professor at the Center for Refugee and Disaster Response who has been involved in refugee research and policy analysis since 1979, described the response to date as incoherent and, in some instances, inhumane. Conditions are worsening in countries such as Lebanon and Turkey, he said, in part due to sharp falls in international funding. The United Nations Syria Regional Refugee and Resilience Plan has only received 37 percent of a $4.5 billion appeal. Tensions along the borders are rising, Robinson said, as countries threaten to close their borders to and/or discontinue services for refugees.

An estimated 2,800 have died while attempting to cross the Mediterranean Sea into Europe, and many more are dying in hazardous border crossings on land. It's long past time for action, Robinson said.

"We know how to respond; we've been here before," he said, referencing efforts to help people in Cambodia, Laos, and Vietnam resettle in the 1970s and 1980s.

Robinson called for a heightened global response to the crisis that includes increased relief and development aid for migrants, coordinated and humane treatment for all refugees, the safe return home for non-refugees, and an increase in resettlement commitments from a cross-section of countries.

"Europe, stop building fences, stop shooting water canons, stop tear-gassing populations," he said. "Open your doors and provide for inclusive policies and practices that basically say, 'We will grant you the temporary right to remain with life and dignity.'"

&quot;This is about doing good, not simply wringing our hands at the horrible things happening to people in #Syria.&quot; - #JHSPH prof Robinson

Robinson also called for reforms to the Dublin Regulation that says that the first country a refugee seeks asylum in is where he or she has to stay and be processed.

"We need to share the load," he said. "We need more reception and transit centers, and less camps with fences."

Richard, who had flown in from Berlin a day earlier and spent the morning in Washington, D.C., focused her remarks on the millions of migrants seeking refuge worldwide. With each passing day, she said, more and more people are affected and need assistance.

"The tragic images we've seen remind us that these are families, just like our own," she said. "They have been torn out of their normal lives and subjected to horrors because of the accident of where they were born."

Richard said the scale of the problem is new and enormous, as 60 million people worldwide have been displaced from their homes.

"Today's conflicts are not just numerous, they are often brutal, chronic, and intractable," she said. Forty-five percent of people displaced by violence spend five years or more away from their homes, she added, and a child born in a refugee camp at the start of a crisis will often spend his or her entire childhood away from home.

She pleaded for non-combatants to be treated humanely and for an end to the harassment and killing of humanitarian aid workers.

Richard said that the U.S. has historically led the way in contributing to relief efforts around the world and must continue to do so.

"Even in an era when bipartisanship seems dead, lawmakers continue to come together to generously fund humanitarian efforts, " she said.

In addressing the relatively low number of Syrian refugees the U.S. has taken in, Richard acknowledged security concerns and the threat of terrorists seeking asylum as refugees.

"The United States is taking every possible precaution, screening applications through extensive security checks and lengthy in-person interviews. This process is deliberate, thorough, and careful, and thus takes time," Richard said. "The days of airlifting thousands of refugees and bringing them to Guam or Dort Fix, New Jersey, ended on Sept, 11 2001. We are, however, determined to do more to help refugees."

She said that U.S. diplomacy efforts are vital, and the nation will continue use its international influence to keep borders open and aid flowing.

"This has helped save millions of lives," she said.

As the U.N.'s World Food Programme has been forced to cut food rations to Syrian refugees due to lack of funds, and aid is stretched thin, Richard said that private giving can help close the gap.

In just one week after images of the drowned Syrian toddler began circulating in social media, donations for funds to UNICEF went up 600 percent. That sort of giving needs to continue, she said.

"In general, even people who give generously to humanitarian relief tend to shy away from man-made crisis. After Haiti's devastating 2010 earthquake, donations poured in," she said. "There is more comfort to giving quickly to a natural disaster and less to a man-made one that can be messy and complex."

More nations, she said, need to contribute what they can, both in terms of funds and in helping to resettle those who have been displaced. She called on rising economic powers like Brazil, Russia, India, and China to do more.

In her final remarks, Richard said we can't afford to look away.

"We must stay vigilant and engaged, and take whatever action we can to stop ethnic and religious political rivalries from exploding into violence," she said. "We cannot magically inoculate the world against poverty and war, but we can build up resistance."