Starting on Oct. 5, Johns Hopkins students and employees will have a new option for getting to and from downtown Baltimore, and to a number of central neighborhoods along the way. 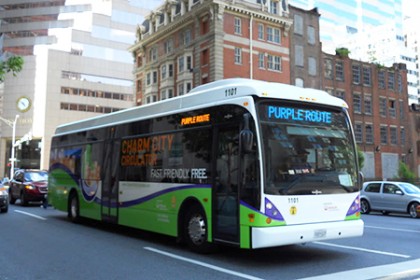 The Charm City Circulator, the city's free bus service, is extending its Purple Route north to the university's Homewood campus in North Baltimore.

Currently the route—the most heavily used of Baltimore's five free Circulator lines—travels on a north-and-south loop between Federal Hill and Penn Station. With next month's expansion, the route will continue all the way up to 33rd Street and stop not far from the main entrance to Homewood. On their way up to Charles Village, the buses will pass through downtown and Mount Vernon, Station North, and Old Goucher neighborhoods.

The Circulator buses travel in a constant loop, swinging by each stop every 10 to 15 minutes.

The Purple Route expansion has been in the works for a few years, with support from Johns Hopkins.

"We think this is a great additional option for Baltimore transit users and for Hopkins," says Greg Smith, the university's director of Transportation Services.

The specifics of the new Purple path are still being finalized, according to a spokesperson with the Baltimore City Department of Transportation. A preliminary map showed stops near Homewood along Charles Street as the route runs northward, including at 30th and 32nd streets. The bus then loops back around to travel southward on St. Paul Street.

Smith says JHU's Transportation Services is taking "a wait-and-see approach" on whether the expansion will affect any of the university's own transportation offerings.

"We don't expect to make any immediate changes," he says.

But for riders interested in traveling downtown or to Federal Hill, the university has in the past recommended taking the Homewood-Peabody-JHMI shuttle and hopping off near the Peabody Institute in Mount Vernon, before transferring to the Circulator. That two-step process will no longer be necessary with the expanded Purple Route, Smith says.

Overall, the expansion is expected to increase the Purple Route's annual ridership from about 1.8 million to 2.7 million, The Baltimore Sun reported in May as several systemwide changes came under discussion. 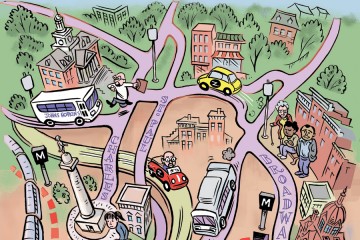 Published Nov 2012
The trick to navigating Charm City without a car: Figure out how its many transportation systems work for you / Gazette