A new professorship in water and public health and one focused on genetic medicine have been established at Johns Hopkins University with a combination of private donations and state funding through the Maryland E-Nnovation Initiative. 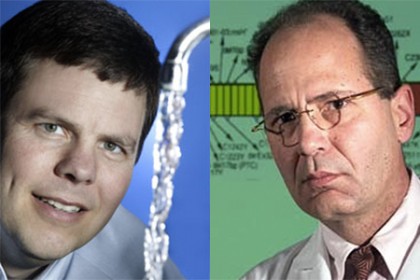 The two professorships, announced today, are among the first six positions at Maryland universities supported by $14.9 million in funding from the Maryland Department of Business and Economic Development. The E-Nnovation initiative is intended to spur private donations to universities for basic and applied research in scientific and technical fields by matching private donations of at least $500,000.

"At a time when our scientists and researchers face a challenging funding landscape, we thank our state leaders for their vital support and their recognition that research universities are where bold discovery and innovation happens," JHU President Ronald J. Daniels said. "This initiative is a wonderful example of the possibilities ignited through public and private partnership."

With the funding, Kellogg Schwab, a professor in the Department of Environmental Health Sciences at the Johns Hopkins Bloomberg School of Public Health and director of the JHU Water Institute will hold a new professorship in water and public health. The endowment was made possible by a $1.25 million donation from William C. Clarke III—a member of the Bloomberg School's Health Advisory Board—and a $1.05 million state match.

The Water Institute connects researchers across Johns Hopkins to develop solutions for providing clean water and proper sanitation in the United States and internationally. Schwab's research focuses on how pathogenic microorganisms spread in water, food, and the environment.

The Reta Honey-Hiers Professorship for Tarlov Cyst Disease was established with $1.25 million from Mary Ellen Pease and Charles Scheeler and $1.05 million from the state program. The professorship will be held by Hal Dietz a professor of pediatric cardiology; the Victor A. McKusick Professor of Genetics in the departments of Medicine, Pediatrics, and Molecular Biology and Genetics at the Johns Hopkins University School of Medicine; director of the William S. Smilow Center for Marfan Syndrome Research; and a member of the McKusick-Nathans Institute for Genetic Medicine. Tarlov cysts are debilitating fluid-filled sacs that form within spinal nerves, most prevalently in the sacral spine, causing life-altering pain and multi-systems symptomatology.

Dietz is a leading authority on Marfan syndrome, having conducted genomic mapping and research that has made diagnosis of the rare genetic condition patient-specific and accurate. He is also investigating the genetic factors involved in defects of the arterial wall and the aorta.

"These professorships are an excellent example of the ways in which Johns Hopkins connects the laboratory and the classroom to real-world issues affecting individuals, communities, and society as a whole," JHU Provost Robert C. Lieberman said. "These awards are an investment not only in our scholars, but also in improving the lives of people across Maryland, and the world."

The E-Nnovation initiative was created by Maryland's General Assembly during the 2014 legislative session and received an appropriation of $8.5 million in FY2016. The funds can be used to pay salaries of newly endowed department chairs, staff, and support personnel in designated scientific and technical fields of study; fund related research fellowships for graduate and undergraduate students; and purchase lab equipment and other basic infrastructure and equipment.

"The discoveries made and students trained at Maryland universities are among the greatest advantages we have as a state. These endowments will further strengthen our higher education institutions and pave the way for bold new research and innovation," said Mike Gill, secretary of the Department of Business and Economic Development. "We are proud to be partners in this endeavor with the world-renowned universities we have here in our state."