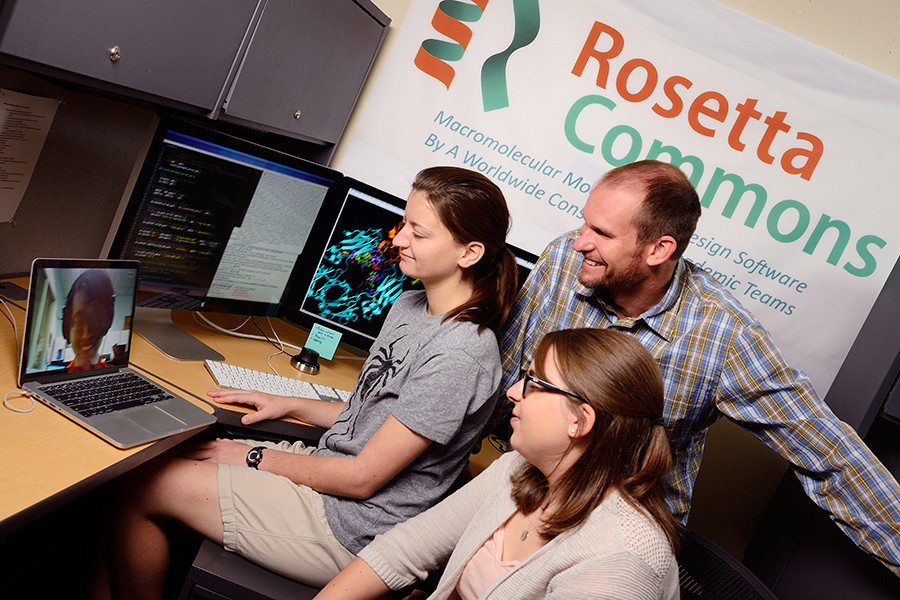 A summer research internship for undergraduates is not only helping them learn to build new lifesaving drug molecules and create new biofuels—it's also testing the concept of a virtual research community.

The Johns Hopkins Institute for NanoBioTechnology—with the help of a $200,000, two-year grant from the National Science Foundation—has launched a first-of-its-kind training program in which students study vaccine design, create biofuels, and build protein circuits in living cells, all with the help of specialized software that lets them collaborate from distant host university labs.

A typical summer research program—the institute's Nanobio Research Experience for Undergraduates, for example—brings students together to one host university, where they work in different laboratories on various projects. In the new pilot training program on Computational Biomolecular Structure, students use an open-source software called Rosetta to work together on problems in computational biology and are mentored by faculty who are part of a global collaborative team known as the Rossetta Commons. The software gives users the ability to analyze massive amounts of data to predict the structure of real and imagined proteins, enzymes, and other molecular structures.

"Computational biologists study known macromolecules or design new ones and use computers to predict how these molecules will fold in 3D and how they might interact with cells or other molecules," says Jeffrey Gray, professor of chemical and biomolecular engineering at Johns Hopkins and the INBT affiliate who spearheaded the program. "For example, researchers create computational algorithms to design a new drug molecule or use the Rosetta software to predict how molecules might behave in a living organism. And because the work is done using a computer, researchers can easily collaborate at a distance."

The students in the pilot program began their research experience with a weeklong boot camp at the University of North Carolina at the end of May. The following week, students traveled to their host universities, which include Johns Hopkins; University of California, Davis; Scripps Research Institute; Stanford University; New York University; Rensselaer Polytechnic Institute; and Vanderbilt.

Morgan Nance, a biochemistry and molecular biology major from the University of California, Davis, is spending her summer at JHU's Gray Lab.

"I hope to become more familiar with Rosetta to the point that I am able to utilize it in my home lab," Nance says. "I want to gain the technical skills of how to use this new software and the knowledge of how to develop it further. I hope to gain valuable research experience so that when I apply to graduate school, I'm ready to jump into action."

Unlike experimental biology, which is performed with test tubes and Petri dishes, computational biology uses computer software. Therefore researchers in the discipline are accustomed to collaborating with people from many locations.

"Each lab has different expertise," Gray says. "One lab might specialize in protein docking, another in RNA structure and design, another in vaccine design or protein function. When students cross train in these laboratories, they learn to recognize the common themes. Virtual collaboration also opens them up to more options to consider when they go to find a job or apply to graduate school.

"We can ask questions with computational biology that you just can't ask with an experiment," Gray adds. "The level of detail that we can examine is completely different."

The research internships last 10 weeks. Each week, Nance and her colleagues "meet" online via video chat to discuss current published papers in the field and to present updates from host labs. In August, Nance will reconvene with her cohort at the annual RosettaCON in Leavenworth, Washington.

Sally O'Connor, NSF program director, spent time with the Rosetta trainees during their boot camp and described the cohort as "impressive."

"It takes a certain type of student to be able to participate in the program, because there is computer programming involved as well as understanding of the basic science underlying the projects," O'Connor says. "If this distributed model works just as well as the traditional one, we would then be able to accept this kind of model and access the best labs in the country for doing research."

Though Nance is on her own at Hopkins, INBT staff members have made sure that she is included in activities organized for the 13 students in the on-site REU program.

"I have the opportunity to work under a new principal investigator and get his insight on how research is conducted," she says. "I work closely under a mentor who helps guide me on how to think up questions to answer, and [determine] how to go about answering them. And I have access to great equipment, brilliant minds, and awesome new friends."