Johns Hopkins business student gets rooftop gardens off the ground 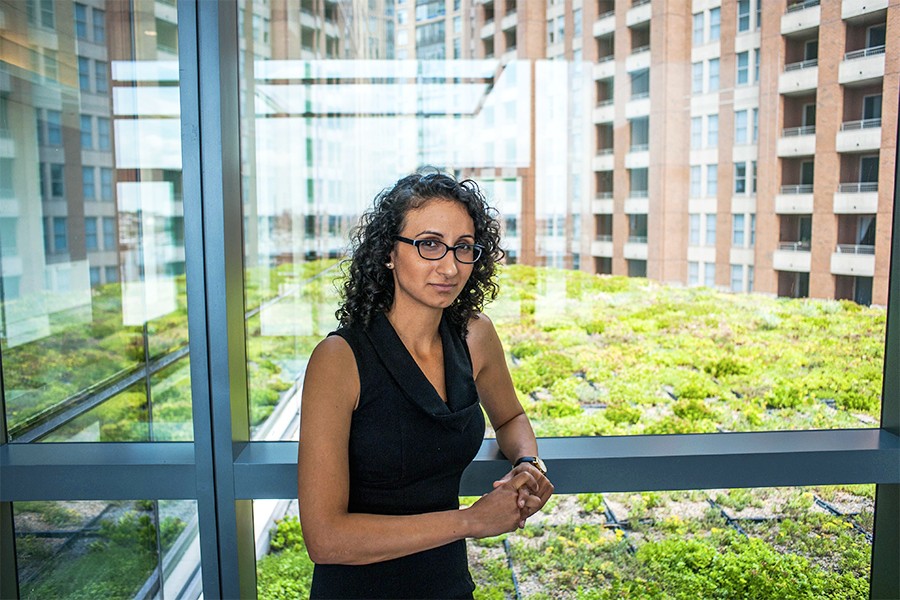 On an especially hot early summer day in D.C., Mehr Pastakia, sporting sunglasses and a neon-green vest, proudly surveys her domain—a lush two acres of greenery atop the U.S. Department of Transportation headquarters in the city's emerging Navy Yard waterfront area. The expansive, neatly trimmed stretches of multihued sedums form a sky-high oasis in what is otherwise a desert of steel and concrete. Fields of vegetation at this altitude are both incongruous and welcome, like a brightly colored mural on a car park wall.

Around us, a foursome of brawny young men fan out and look for anything out of place: a stray weed, a bare patch, plants that have grown ever so slightly over a bed's edge. Their toil invokes the final moments of a haircut when you're ready to get out of the chair, but the stylist spots the willful, solitary blade that demands to be snipped.

"What they're doing now is trimming, mostly for aesthetics, but also making sure we keep the growth in check," says Pastakia, who seems right at home in this windy setting with a bird's-eye view of Nationals Park and the Anacostia River. "If you let a green roof go, weeds can take over. Debris can fly off the roof. A tree can start to grow from a seed dropped by a bird. Nature finds its way."

Pastakia, an MBA student at the Johns Hopkins Carey Business School, didn't create the DOT's green roof, but she's now the caretaker of it, along with several other green rooftops in the nation's capital and in Maryland. In a world where timing is everything, Pastakia has gotten in on the ground floor—or more aptly, the rooftop floor—of a growth industry.

Pastakia is principal owner of Pratum Greenroofs LLC, a company she founded while a student at Carey. In less than three years, Pratum has landed contracts with several prominent Mid-Atlantic property developers and management firms, including JBG and Akridge, to repair and/or maintain green roofs at the DOT, the National Institutes of Health in Maryland, the International Monetary Fund, the American Society of Landscape Architects, and various commercial properties.

Her first project was with Harbor East Property Management Group for the Legg Mason Tower, the Carey School's downtown home. During her MBA interview, Pastakia sat down with Mary Somers, the school's associate director of admissions. After learning of Pastakia's background in horticulture, Somers told the prospective student about Legg Mason building's green roof, which needed some love. The roof's vegetation, planted in trays, had turned mostly brown and weedy due to neglect and lack of access to water.

Pastakia secured a meeting with the building's assistant property manager and convinced her she could turn the roof green again. Partial credit, she says, went to her fingernails.

"I think it was because I wore purple nail polish that day, and it was Ravens season," Pastakia says. "And she just took a leap of faith with me. I remember her saying: 'OK, if you think you can fix it, go for it.' The stars aligned."

For the first year, Pastakia worked alone on the project. She bought and hauled in the plants, substrate, and any other items she needed to replant the trays and turn the outdoor garden around. Over time, her hard work paid off. The roof today blooms with full sedum coverage blended with accent plants.

"I grew it back in with a lot of blood, sweat, and tears, mixed in with panic and anxiety," she says. "It takes a year, maybe two, to turn around a neglected roof."

Why go green on a roof at all? Pastakia says there are many benefits.

Green roofs typically consist of layers of protection fabric, drainage, filter fibers, substrate (soil and crushed rock, brick, or shells), and plants. No irrigation is needed—the plants are grown and sustained by rainfall. Their primary purpose is stormwater management, as a green roof can capture that first 1.2 inches of rainfall and any excess moisture slopes to drains that lead to the public sewage system. While it may not sound like much, any extra water retention is vital. Although sewage drains and other infrastructure on the ground take stormwater to treatment plants, a heavy rainfall can cause sewers to overflow and send raw sewage into nearby rivers and streams.

Green roofs also reduce the "heat island effect" on cities. Built-up areas are typically hotter than nearby rural areas, in part because concrete and other man-made surfaces attract and retain heat. The annual mean air temperature of a city with 1 million people can be 1.8 to 5.4 degrees warmer than its surroundings. Heat island effect can increase summertime peak energy demand, air conditioning costs, air pollution, and heat-related illness and mortality. Green roofs are "one way to reduce the sun's intensity and bring the temperature on the street down," Pastakia says.

Plus, they look cool.

"You can design them in a way where it's an amenity. You can host events on a green roof, like a wedding, and they can be a revenue driver," she says. "What's not to like about a beautiful garden?"

Pastakia's love of gardening dates back to her days as a toddler. At age 3, she would propagate chrysanthemums in the small, terraced garden behind her Bethesda home. Around this age, Pastakia's mother was diagnosed with ovarian cancer, a disease that steadily took its toll. Pastakia recalls how in early spring she would wander the garden to collect plants for a "medicinal concoction" to give to her mom, a microbiologist at the National Institutes of Health.

"I thought if she ate the plants she would get better, but we wound up just applying the mixture topically to her head," she says. "I was just a kid, but I do believe that nature has the power to heal."

When Pastakia's mother finally succumbed to her cancer and passed away, the then 9-year-old Pastakia found solace in yard work.

"Instead of doing my homework, I'd often play in our garden," she says. "I felt at home there."

She enrolled at the University of Maryland and majored in plant science. During her last year of college, she registered for a sustainability seminar in which Ed Snodgrass, the "grandfather of green roofs," gave a keynote address. After his presentation, she asked Snodgrass for advice on how to break into the business. Previously, some of Pastakia's advisers had told her to look into the green roofing industry.

"There is no pre-beaten path as it's a relatively new industry," she says. "As one person told me, it's like laying track. You just have to go out and figure out how to make it happen."

She got a summer internship at Maryland-based Green Roof Plants and later found work for a Baltimore-based green roof company called Furbish, where she cut her teeth and learned the trade. What followed was a string of "not-so-glamorous" part-time jobs before she learned about the Johns Hopkins MBA program.

"I've known I wanted to do an MBA since my undergrad days," she says. "I thought now was the time to do it."

Starting a business while still studying at Carey has had its perks. She's able to extract professional advice from—and bounce ideas off—classmates and faculty. She regularly talks with Somers, whom Pastakia considers a mentor.

Somers says that Pastakia made an instant, and favorable, impression on her. "I thought she was amazing the second I started talking with her," Somers says. "I then got to know her better. She's a perfectionist, in a good way. And she's very good at building a network. When she hears about an opportunity or lead, she follows through with it. People feel very comfortable around her and trust her, which is a wonderful quality to have. She identified a niche trend and went after it."

Until recently Pratum has limited its work to green roof maintenance, but this past month the company finished its first rooftop installation at One Franklin Square in D.C., the future home of The Washington Post. The project includes a 110-linear-foot, 16-foot-tall green screen, a trellis system for growing vines.

"And maybe one day soon I can start to pay myself," Pastakia says with a laugh. "Right now we want to deliver on these new big projects. It's been a great year. Word of mouth has spread, and it's fun and exciting. I like to think it's all built on trust. People trust you know what you're doing, and that you will do your utmost to take care of the roof for them."