A Johns Hopkins University chemist is leading research groups from five schools that won a $7.5 million grant from the U.S. Department of Defense for materials science work that could lead to advancements in electronics, computers, optics, and weapons technology. 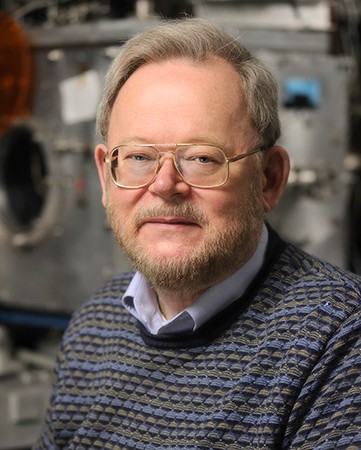 Kit H. Bowen, professor in the Krieger School of Arts and Sciences' Department of Chemistry, is principal investigator in the project involving seven teams from Johns Hopkins, the University of Maryland, the University of Utah, the Naval Postgraduate School, and the University of California, Berkeley. The grant to be paid over five years is one of 22 awards made this year totaling $149 million to research teams from different academic disciplines for basic research, the federal agency said.

The Multidisciplinary University Research Initiative has been going for 29 years and has resulted in "significant capabilities for our military forces and opened up entirely new lines of research," the agency said in a news release. Projects in the research initiative have led to improved laser technology for precision in navigation and aiming weapons and to advancements in nanotechnology.

Bowen's group of seven teams will be working on ways to manipulate the properties of microscopic clusters of atoms that include metals. The goal is to find ways to turn the atom clusters into materials that would be useful in practical ways without losing desirable properties—including catalytic, magnetic, and optical characteristics—that the clusters show at a microscopic scale.

Clusters are bundles of atoms and/or molecules held together by the same forces that bind solids and liquids.

Bowen said that at their smallest structures of only a few atoms, the metalloid clusters involved in this project show unusual properties that could potentially be used to create materials that perform better in, for instance, computers and weapons systems. If those properties can be selected and sustained on the larger scale, Bowen said, "you'd really have a breakthrough in materials. ... It's still only a dream. We don't want to oversell it."

He said the effort has the potential to develop unprecedented control over the properties of materials, opening the door to improvements in an array of technologies for military and civilian use.

Kenneth Karlin, chairman of the Department of Chemistry, said winning the competitive award was "a great honor for [Bowen] and for the department. ... He deserves it; he's been an outstanding researcher, very productive."

The grant announced in June will pay chiefly for graduate student salaries and some overhead costs for the institutions.

Johns Hopkins has two research groups working on the project, one headed by Bowen, the other by Tim Mueller, an assistant professor of materials science and engineering in the Whiting School of Engineering. The University of Maryland, College Park also has two groups on this effort, and each of the other schools has one.