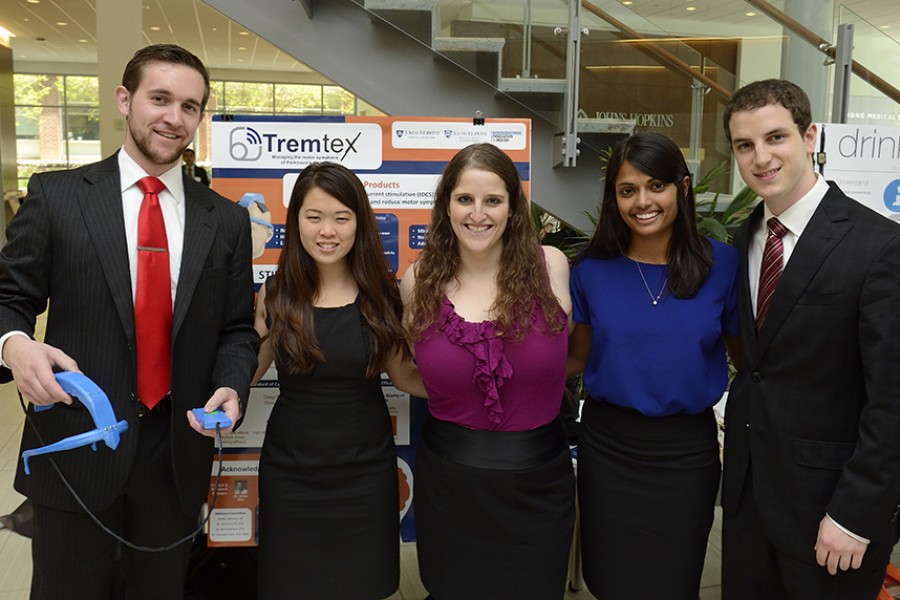 Parkinson's disease patients whose symptoms such as tremor, muscle stiffness and slowed movement make it tough to hold an eating utensil steady have few options for relief outside of a hospital or clinic. Medication can help, but over time it tends to become less effective. To give these patients another in-home option, Johns Hopkins graduate students have invented a headband-shaped device to deliver noninvasive brain stimulation to help tamp down the symptoms.

The students' prototype, developed during a yearlong biomedical engineering master's degree program, has not yet been tested on humans, but it is viewed as a promising first step toward helping Parkinson's patients safely relieve their own symptoms at home or elsewhere without going to a hospital or doctor's office. The design has already received recognition at several prominent competitions. On June 9, it won the $5,000 second-place prize in VentureWell's BMEidea national design contest for biomedical and bioengineering students. In May, the invention earned first-place honors in the People's Choice Award competition at Johns Hopkins' Biomedical Engineering Design Day 2015. Earlier, it was a finalist in the Rice University Business Plan Competition.

The five student team members were inspired to build the new device last summer after observing neurosurgery being performed on Parkinson's patients at Johns Hopkins Hospital. Parkinson's is an incurable neurodegenerative disorder that affects 1 million people in the United States and 7 million worldwide.

For patients in advanced stages, one treatment option is deep brain stimulation. In this procedure, a surgeon implants thin electrical leads into the region of the brain that controls movement. The leads are connected to a pulse generator—similar to a pacemaker for the heart—that is placed under the skin below the collarbone. This implant sends electrical signals to the brain to help curb some symptoms caused by Parkinson's.

"We saw that this procedure is really invasive and can take 10 to 15 hours to complete," said Shruthi Rajan, a team member from Charlotte, N.C. "It's also very expensive, and not all patients qualify for the surgery. We asked if there was a way to provide the same treatment in a less invasive way that doesn't require brain surgery."

The students were referred to Yousef Salimpour, a Johns Hopkins Medicine postdoctoral research associate who has been studying a noninvasive Parkinson's therapy called transcranial direct current stimulation. In this painless treatment, low-level current is passed through two electrodes placed over the head to tweak the electrical activity in specific areas of the brain. The technique can be used to excite or inhibit these nerve cells. The treatment is still considered experimental, but it has attracted much attention because it does not require surgery and is inexpensive, safe and relatively easy to administer without any side effects.

The biomedical engineering students met with Salimpour to learn about the research he conducts in a clinical setting. "We told him we had an idea for a portable home version of this equipment," Rajan said. "But we planned to add safety measures to make sure the patient used it properly without a doctor or nurse being present."

The students aimed for a prototype that would enable a patient to activate the battery-powered treatment by touching a large easy-to-press button. With patient safety in mind, the students designed their prototype to deliver current for only 20 minutes daily and only at a doctor-prescribed level.

To help fine-tune their design, the students met with dozens of Parkinson's patients over a four-month period. Although the students did not administer the actual brain treatment, the patients help them craft the critical headband component so that it would be easy to put on, comfortable to wear and positioned so that the electrodes would remain stable and properly target the motor cortices areas of the brain.

"For a comfortable fit, we put an elastic band in the back and told the patients to put it on like a baseball cap," said team member Ian Graham, from Old Saybrook, Conn. "The interaction with the patients was really helpful. In our usual college classes, we're just given a textbook problem to solve. In this program, being able to find a real-life biomedical problem and figure out how to address it was huge. And we even received letters of encouragement from some of the patients we met."

The other members of the student design team were David Blumenstyk, Erin Reisfeld and Melody Tan.

In addition to the assistance from neuroengineer Salimpour, the student inventors received guidance from other members of an interdisciplinary team of Johns Hopkins medical researchers that includes neurologist Zoltan Mari, neurosurgeon William Anderson and neuroscientist Reza Shadmehr.

"Our group is working on the idea of using noninvasive brain stimulation for Parkinson's disease symptom control as a new clinical treatment," Salimpour said. "Our preliminary results were promising. Patients keep asking us for more of this treatment. But we couldn't provide the treatment for them because there is no portable and FDA-approved device like this for Parkinson's patients that is on the market at this time. The biomedical engineering students then approached us with the idea of designing the home-based treatment device. They did a great job, and made a fascinating prototype. We hope that based on their preliminary work, Parkinson's patients will receive the benefit of this new technique at home very soon."

With help from the Johns Hopkins Technology Ventures staff, the student inventors obtained provisional patents covering the design of the device, dubbed the STIMband. Another Johns Hopkins student team is slated to take over the project in September to further enhance the design and move it closer to patient availability. One addition may be a wireless connection to allow a doctor to adjust a home patient's treatment level from a remote location.

The STIMband project and other undergraduate and graduate-level student inventions are a hallmark of the Johns Hopkins Department of Biomedical Engineering, which is shared by the university's Whiting School of Engineering and its School of Medicine. Students work on these projects within the department's Center for Bioengineering Innovation and Design. 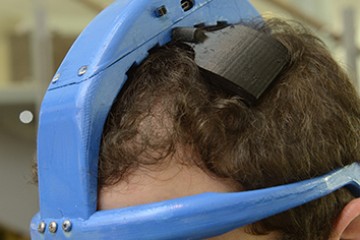 The students aimed for a prototype that would enable a patient to activate the battery-powered treatment by touching a large easy-to-press button.