Rebekka S. Klausen, an assistant professor in the Department of Chemistry at Johns Hopkins University, is among 44 young scientists across the country chosen to receive grants from the U.S. Energy Department's Office of Science under the agency's Early Career Research Program. 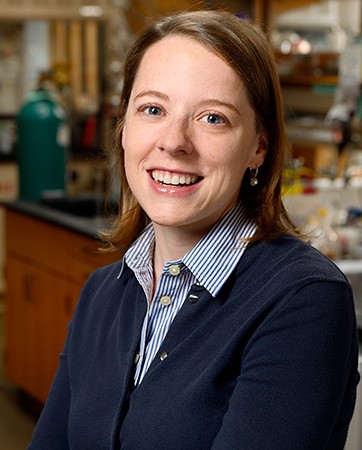 "I'm honored and gratified to have our research recognized by the DOE," said Klausen, a specialist in materials science who will use the $750,000 over the next five years to pursue work on silicon, a chemical element used to produce the semiconductors that power computers and solar cells.

Klausen and several graduate students will work to create novel silicon-based molecules and polymers of controlled size and shape to study the emergence of length-dependent properties in silicon materials. Since the size of a material can determine the amount of light it absorbs, the new materials could eventually be used in lightweight electronics like solar cells potent and small enough to run smart phones and laptop computers. Klausen notes that because of silicon's earth abundance—27.7 percent by weight of the Earth's crust is silicon—these materials will be broadly relevant to all aspects of DOE's mission.

Klausen joined Johns Hopkins in 2013 after completing post-doctoral work at Columbia University. She earned her doctorate at Harvard University.

Kenneth D. Karlin, professor and chair of the Department of Chemistry, said he is very pleased for Klausen and for the department.

"This is wonderful for her as a young, newly independent researcher," Karlin said. "It just means her ideas have been recognized as being really front-line, and the grant allows her to vigorously pursue this line of research."

Klausen was among 44 researchers chosen from about 620 proposals, and one of 27 affiliated with U.S. universities. Seventeen of the scientists selected are from the DOE's national laboratories, according to an agency announcement. The grants pay for salaries and research expenses.

Grants were allocated for untenured, tenure-track assistant or associate professors who received their PhD within the past 10 years. The DOE said the selections were based on peer review by outside experts.

"Supporting talented researchers in their early career years is one key to building and maintaining an effective scientific workforce for the nation," Patricia M. Dehmer, Acting Director of DOE's Office of Science, said in the agency statement.