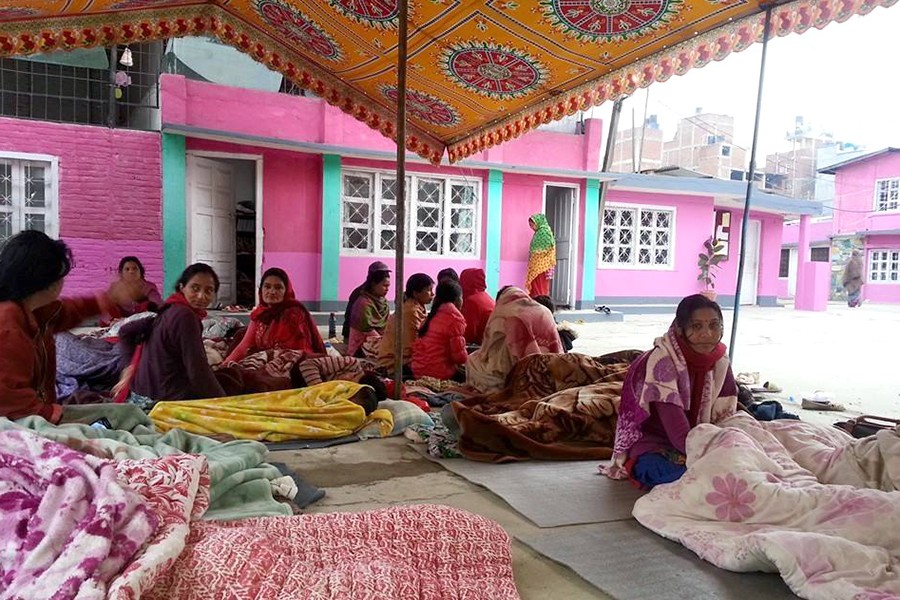 Image caption: Women camp in the courtyard of a school compound in Kathmandu, Nepal, in the aftermath of a 7.8 magnitude earthquake that claimed more than 7,000 lives.

In the days following the deadly earthquake that killed more than 7,000 in Nepal, Dr. Kusum Thapa arrived home to help care for the neighbors and friends who took shelter in her family's compound in Kathmandu. About 1,000 people camped there in the courtyard of The City Academy, the school her sister-in-law runs within the compound walls. Women with babies were given spots for their bed mats under a big makeshift tent that had been erected there. 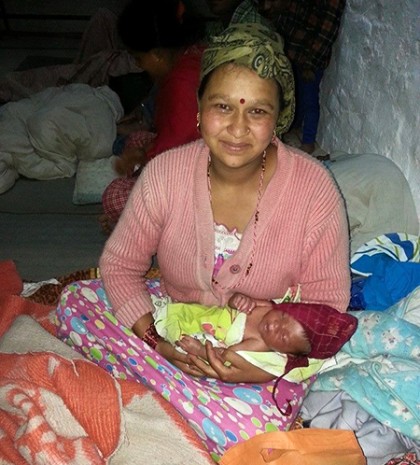 Image caption: A young mother with infant in Nepal

"The door was open for anybody who did not have a place to stay," Thapa said in an interview conducted over Skype. "Being here and being able to help was such a good feeling."

Managing hundreds of people in a makeshift camp does have its challenges. Tracking down food supplies. Providing sanitation. Keeping people warm and safe.

Mothers with week-old infants—and there were several, Thapa said—were persuaded to stay in a classroom in the school to keep warm and out of the rain, and avoid hypothermia, a priority for Thapa, Jhpiego's maternal health expert in Nepal. The school roof, she said, was made of a non-concrete material and not in danger of collapse. The school's bathrooms were open for use, but they needed to be hand-flushed with water to keep them clean.

"The problem for the recently delivered mothers and newborns in this congested atmosphere is infection and diarrhea," Thapa said. "Mothers were reminded to wash their hands thoroughly."

And then came the constant tremors, and her neighbors' impulse to flee.

"I was telling them, everything would be fine. I told them not to panic, not to run," Thapa said. "It's that reflex: there is a tremor, there is an earthquake and people get up and run. It was very stressful."

Since returning home from a professional meeting in London on April 26, a day after the 7.8-magnitude earthquake shook the region, Thapa has been working at the family compound. As more neighbors felt confident to travel to their own families outside Kathmandu, the number of house guests in the Thapa family compound in the Old Baneshwar neighborhood has dwindled. When she finally visited her own home, she found cupboards overturned, walls cracked, and the family cars blocked by debris. She also learned of the damage to the main building at the maternity hospital in Kathmandu. The hospital staff is dealing only with emergencies, she said. Women who have given birth are recovering on mats on the ground floor.

Thapa has seen little of her son, a physician at a medical teaching college. Doctors were sleeping in cars and buses, she said.

"We are all suffering together," Thapa said. "I used to see those refugees in the Syrian war on television and I couldn't imagine this would be us. Now here we are thinking of the earth opening, separating beneath us."

When Thapa recently accompanied a close friend to the cremation of her mother, she was stunned by what she saw: "Literally people had to queue to get a place to [cremate] their loved one. It is so sad and dreadful."

Joyous moments are tinged with sadness, she said.

"They pulled out a young man after [being buried] five days and there he is alive," she said of an evacuation seen on TV worldwide. "That was so unexpected. ... So many could have been pulled out much earlier, but we don't have the infrastructure. That makes us feel very sad."

In the days ahead, Thapa said she expects to travel to remote areas outside Kathmandu, where Jhpiego is working on a maternal health project. "I have been ringing up my colleagues there and they are in desperate needs for tents. They don't have any shelter and it's raining. Drinking water is a major issue. Houses are destroyed. People don't have food to eat. More needs to be done in the villages in the districts."

Thapa said she has heard from many of her Jhpiego colleagues around the world, and she is thankful for their friendship. "I feel so fortunate to be a part of this organization. Everybody has been so kind. Everybody has been praying for us and that's what counts at the moment." 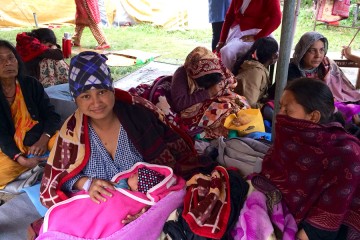 On the ground in Nepal