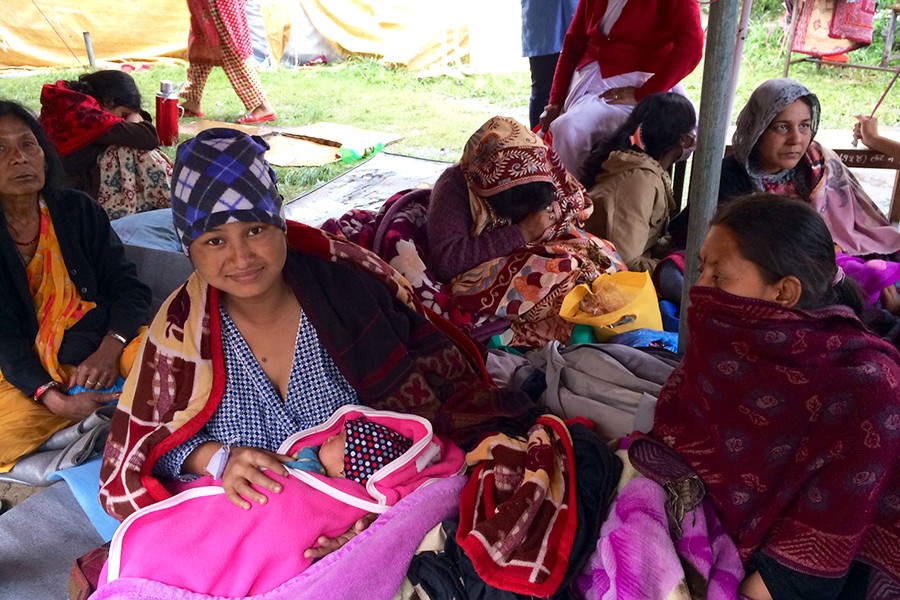 Image caption: Ranjita Shreshta (left), 27, sits with her sister-in-law and daughter, who was born on April 25, the day of the earthquake.

While en route to Nepal as part of an International Reporting Project fellowship, Amie Ferris-Rotman got word that a devastating earthquake had struck the south Asian country, killing more than 4,000 people. She could've cancelled her trip. 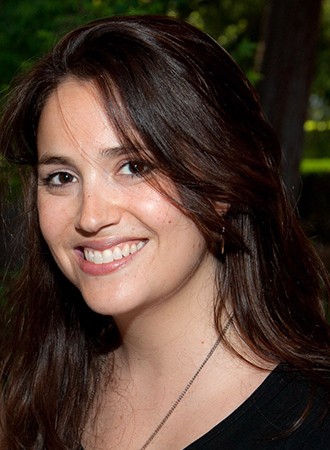 "I was sleepily eating some scrambled eggs in Doha airport when I received a text message from a friend asking if I was OK. Then the news reports started flooding in. Luckily (that's the journalist in me), I was able to get out the next day, and landed in Kathmandu on April 26," Ferris-Rotman explained in an email sent from the shattered capital.

Posting an aerial map of Nepal, she tweeted, "Landed #Kathmandu after hours circling and told to go back at Delhi #nepal." At the airport, about 1,000 people were sleeping outside, a scene of "total chaos," she wrote.

Ferris-Rotman, 35, began crisscrossing the city, reporting on search and rescue efforts, unsafe hotels, and the smoking habits of the rescue workers. Ferris-Rotman was among 11 journalists chosen for the IRP's spring trip to Nepal. IRP, an affiliate of the Johns Hopkins School of Advanced International Studies, is among the few fellowship programs that provides leading journalists with an opportunity to report on the major international news issues of the day.

Although IRP had to cancel aspects of the trip as daily tremors jolted Kathmandu, nine of the fellows were on the ground reporting for such news outlets as NPR, the Huffington Post, the Guardian, Newsweek, ABC News Australia, International Business Times, O Estado de Sao Paulo, and others, said IRP executive director John Schidlovsky, who wrote a first-person account of the earthquake.

"I'm a voracious newshound," Ferris-Rotman explained, "and I love covering massive stories, especially a multi-faceted one like this. Though it has been tough and emotionally grueling, I feel my work is at least giving some attention to those who are suffering in the chaos and misery of this disaster."

Ferris-Rotman visited a maternity hospital and the maternity ward of another institution in Kathmandu and vividly described the life-threatening conditions facing pregnant women and newborns.

"Expectant mothers lay strewn on the floors and corridors of the hospitals, some in the midst of heavy contractions," Ferris-Rotman wrote in an email. "Others were huddled with their hours-old babies outside in makeshift tents, which leaked rain water. They had no medicine, and though many had been discharged, they had no home to go to. So many houses have been destroyed by the earthquake. With little more than a few blankets around them, they breastfed their newborns outside. Some women said there had been several births outside, under a tent. Doctors and midwives were coming to work, but due to disrupted transportation, some women were forced to have dangerous home births.

"Half of the Paropkar Maternity and Women's Hospital was deemed unusable by workers (there was no electricity, and the top floors were partially destroyed), so pregnant women were simply camping out. Babies born prematurely, or with difficulties, were housed in a parked ambulance van, though there were no incubators and no heat," she wrote in an email to me.

As a former Kabul-based reporter for Reuters, Ferris-Rotman had seen up close the impact of war on mothers and newborns.

"But the situation in Nepal is very different," she wrote in an email. "An insurgent attack brings Kabul to a standstill for several hours, and disrupts services, but here everyone is affected, en masse and at the same time. In Kathmandu, there is an entrenched fear that there will be another major quake, and women are not taking chances when it comes to their newborns. This puts the city on edge."

With aftershocks continuing unabated and emergency sirens going off, a city "on edge" just about describes the environs of Kathmandu.

Ann LoLordo works for Jhpiego, an international health nonprofit and Hopkins affiliate with offices in Kathmandu. 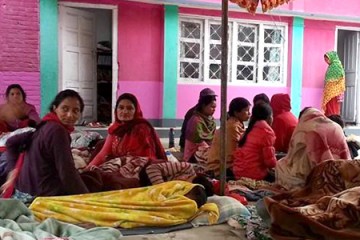