The Blue Jays (9-6), who defeated Ohio State 13-6 on Saturday night to win the inaugural Big Ten tournament, are effectively the No. 10 seed in the 18-team field. They will face the seventh-seeded Cavaliers (10-4) on Sunday at 1 p.m. in Charlottesville. The game will be televised on ESPNU.

The winner will advance to the NCAA quarterfinals at Navy on May 17 to face the winner of a first-round game between No. 2 seed Syracuse and either Bryant or Marist, which will meet in a play-in game.

The Blue Jays lead the all-time series against the Cavaliers 58-30-1, though Virginia knocked off Johns Hopkins 16-15 in overtime earlier this season.

Tickets for the game will go on sale at 9 a.m. today online at VirginiaSports.com, by calling 800-542-8821, or in person at the Virginia Athletics Ticket Office in Bryant Hall. General Admission tickets are $8 for adults and $6 for youth 18-and-under and students of the participating schools with a valid student ID. 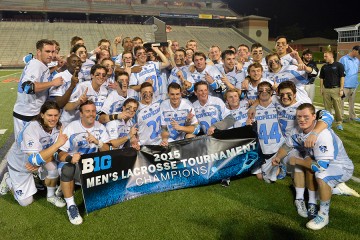