More than $80,000 seed funding up for grabs in four categories

A drug that aims to slow Alzheimer's. A new vaccine for HPV. An app that could do away with billing awkwardness at restaurants. A vision to build a hydroponic farm in Baltimore.

Those are just a few of the 32 startup ideas that have made it to the home stretch of the 16th annual Johns Hopkins Business Plan Competition, which concludes Friday at the university's Homewood campus. Teams will make their final presentations beginning at 1 p.m., and winners will be announced at an evening awards ceremony. More than $80,000 in seed funding is up for grabs.

Each year, he says, at least a couple of them take off to become successful businesses. A few of examples are Boss Medical (now Avitus Orthopaedics), which aims to develop better, more affordable orthopaedic technologies; and Jama Cocoa, a Maryland truffle shop that aspires to be "the Starbucks of chocolate."

What hasn't changed with the competition, Aronhime says, is its core principles: "Students learning how to stand in front of strangers and communicate their ideas."

Those strangers this year will include 52 judges with various types of investment experience.

The competition began in February, and 64 semifinalists were ultimately shaved down to 32 teams competing in four categories: General Business, Social Enterprise, and Medical Technology & Life Sciences (grad and undergrad categories). A full list of finalists is available online; they include:

In the Social Enterprise category, there's Dana Cita, a micro-lending firm that helps fund higher education for youths in Indonesia; and Bright Energy Africa, a venture to create smokeless fuel briquettes in Tanzania.

Urban Pastoral is doing work here in Baltimore, designing and operating a commercial-scale rooftop hydroponic farm. The Full Society app is designed to make paper checks obsolete at restaurants, allowing users to instantly pay, split, and tip on their phones. And ShapeU offers an online tool for forming small workout groups and pairing up with personal trainers.

The General Business category includes RENT-FERENCE, a service to help Chinese students from abroad navigate their rental options in the U.S; and an idea for "The Clean Air Pillow," designed to cut down the spread of illnesses on planes.

In the Medical Tech/Life Sciences category for graduate students, there's TremTex, an electrical stimulation device that fits on the head to control symptoms of Parkinson's. Cogentis Therapies wants to develop and commercialize a peptide drug to slow down the progression of Alzheimer's and other brain disorders, while MicroPAD Solutions wants to combat viral diseases in Africa with a device that screens for multiple diseases at once. Revai has created a system for keeping organs healthier during transport from donor to recipient, and PathoVax is a vaccine addressing a much wider range of HPV subtypes than the current options on the market.

Undergrad teams in the same category include SpiroSense, which just won a national health technology competition for its diagnostic system for obstructive lung disease, and Oxylizer, which is targeting healthcare facilities in India with a device that measures oxygen concentrations from external sources (i.e. in ambulances or surgery rooms).

Though the event was initially for Hopkins students only, the medical/science category expanded last year to includes applicants from across the country. The goal, Aronhime says, is for it to become "a big-name, national competition." This year the social enterprise category also opened up to other regional applicants, though only Hopkins-affiliated teams ended up applying.

The 32 finalist teams will make their cases from 1 p.m. to 5 p.m. in different spaces in Hodson Hall. The presentations are open to the public, while the awards dinner afterward (featuring keynote speaker Kevin Callahan, a Hopkins '99 alum who founded MapMyFITNESS is a closed event.

The competition is hosted by the Center for Leadership Education of JHU's Whiting School of Engineering. 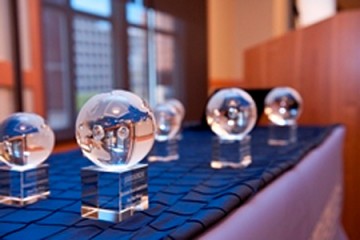 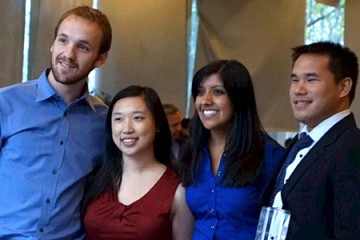