With the win, the Blue Jays (7-6, 4-1 Big Ten) earned the No. 1 seed in the inaugural Big Ten tournament, which begins Thursday at Maryland's Byrd Stadium. JHU will face No. 4 seed Penn State in one semifinal; second-seeded Maryland takes on Ohio State in the other semifinal, with the winners squaring off Saturday at 8 p.m.

In the 112th meeting between the two schools, Hopkins shook off a slow start that saw it fall behind 4-1 to defeat the Terps for the third consecutive season and for the 13th time in the past 18 meetings.

John Crawley started the Hopkins rally with a goal at the 7:57 mark of the first quarter to cut Maryland's lead to 4-2, and Joel Tinney added his second goal less than a minute later for JHU. The teams traded goals and were tied at 7 at halftime before Brown took over. He scored six of JHU's eight second-half goals, including four during a decisive six-goal run in which the Blue Jays turned a 10-9 deficit into a 15-10 lead with two minutes remaining.

Maryland (12-2, 4-1), which came in ranked No. 3 nationally, got three goals apiece from Joe LoCascio and Jay Carlson but had a difficult time getting the ball past reserve JHU goalkeeper Will Ryan, who came on in the third quarter and made four saves whiles permitting just three goals over the final 25 minutes.

Wells Stanwick added a goal and three assists, while Tinney had three goals and Crawley a goal and two assists. With 15 goals, the Blue Jays nearly triple the number of goals the 5.87 goals per game the Terps had surrendered in their previous 13 games this season.

More information about the Big Ten men's lacrosse tournament, including broadcast and ticket information, can be found at hopkinssports.com 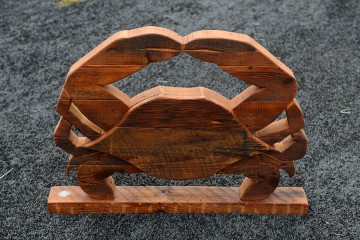 Crab up for grabs