With his new work Rise, Peabody Institute faculty composer Judah Adashi considers how far Americans have come since the since the civil rights movement of the 1960s while acknowledging the steep climb toward social justice that remains. The new piece for double chorus and chamber ensemble is a collaboration with poet and playwright Tameka Cage Conley, and it includes text from a few of poems she wrote for the project. 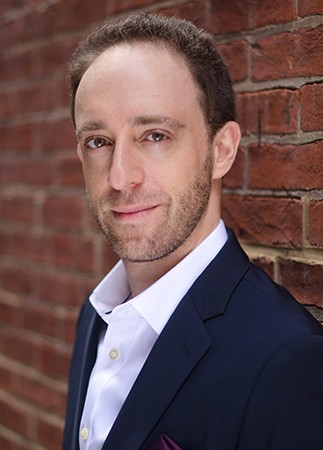 Adashi, Conley, and Washington Week and PBS NewsHour journalist Gwen Ifill present the world debut of Rise on Sunday at 5 p.m. at the Metropolitan African Methodist Episcopal Church in Washington, D.C. The work will be performed by the Cantate Chamber Singers and Afro Blue, Howard University's celebrated jazz vocal group.

The work was commissioned by the Cantate Chamber Singers, with whom Adashi has worked before, as part of the celebratory performances commemorating the Washington choral group's 30th anniversary season and to mark the 20th anniversary of its music director, Gisèle Becker. For the past week, Adashi has been talking about Rise online and through social media, noting that Becker's "vision of a multi-choir, intergenerational piece" shaped his initial ideas, as did his community engagement work at Peabody. When he decided to focus the piece on civil rights, he reached out to Conley, whom he first met when they were both in residency at the Virginia Center for the Creative Arts.

The two collaborators talk about the genesis of Rise in a recent Q&A and also touch on the fact that the recent #BlackLivesMatter social movement—catalyzed by the high-profile killings of Michael Brown in Ferguson, Missouri, and Eric Garner in Staten Island, New York—makes discussing social justice difficult and necessary.

Conley posted an essay to Facebook in which she discusses how personal this political moment is:

I wrote the first poem when my son was sixteen days old and sleeping. I finished the final poem—there are six total—when he was six months old. The project gave me an open door to investigate how I felt about the murders of Mike Brown, Eric Garner, Tamir Rice, and countless others, as I acknowledged the powerful stand protesters were taking and the ways the nation was still failing to protect Black lives. I began to feel that if, through the poems, I could find light on the other side of darkness, so could the nation.

In a series of Facebook posts, Adashi talks about the historical and musical ideas that inform Rise:

One of the most important voices in "Rise" isn't actually a voice. The flugelhorn plays the opening "Invocation" with the piano, and returns at key moments in the 3rd and 5th movements (the latter passage is called for by Dr. Cage Conley's words: "A horn tells us, / a brother has fallen, again..."). I was inspired to use the instrument in part by the local musician ... who plays his horn at the corner of Calvert and Baltimore streets when the weather is warm enough.

The second movement of "Rise" is titled "A Blues, in the Light of Overcoming." Eight days after Bloody Sunday in Selma, President Lyndon Johnson addressed Congress on the subject of voting rights: "What happened in Selma is part of a far larger movement which reaches into every section and State of America. It is the effort of American Negroes to secure for themselves the full blessings of American life. Their cause must be our cause too. Because it is not just Negroes, but really it is all of us, who must overcome the crippling legacy of bigotry and injustice. And we shall overcome." Martin Luther King, Jr. ... reportedly shed a tear in response to the president's use of the phrase.

Congressman John Lewis takes center stage in the third movement of "Rise," titled "O, Light (from Troy to All the Cities)." Both the words and music of this movement—the song is cast in the spirit of Nina Simone's longer, urgent epics—are dedicated to Lewis, a lifelong soldier in the civil rights movement. If any one person is at the heart of "Rise," it is this man, who grew up preaching to his chickens in Troy, Alabama. ("I'm convinced that some of those chickens that I preached to ... tended to listen to me much better than some of my colleagues listen to me in the Congress. As a matter of fact, some of those chickens were a little more productive. At least they produced eggs.") One of the 13 original Freedom Riders, Lewis is the only living speaker from the 1963 March on Washington, despite having nearly died at the hands of a state trooper on Bloody Sunday. He isn't always portrayed in the foreground of the movement narrative, perhaps because he doesn't offer the soaring oratory of Dr. King.

"There is no better story, and no worse story, than the civil rights movement in America," Adashi observes in the Q&A conversation with Conley. "I hope we are creating a meaningful space for everyone to grapple with these realities, as we bear witness to where we have been and where we are going."

More information about the performance, including ticket prices and availability, can be found at http://cantate.org/events/event/civil-rights/