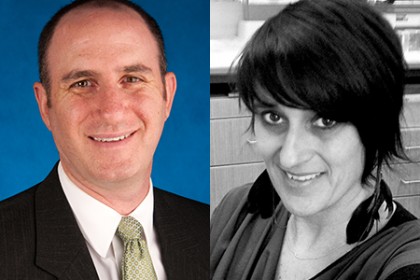 Each award will provide research support for three years at $100,000 per year. Johns Hopkins was one of only two institutions with multiple winners, and the awards also qualified the institution to receive Hartwell funding for two postdoctoral fellowships that Johns Hopkins will designate. The fellowships will provide support for two years to qualified individuals who already hold a doctorate, enabling them to pursue further specialized training in biomedical research as part of their professional career development.

"It's exciting that a foundation focused on helping children through cutting-edge biomedical research chose my proposal to support," Klein says.

With his Hartwell award, he aims to predict how influenza viruses will evolve from one season to the next, which would enable more effective flu vaccines to be developed.

"The flu affects scores of children and families every year and can cause terrible illness and even death," he notes. "My hope is to reduce the burden of influenza, particularly for children.

Dolen will take a novel approach to studying autism, a disorder of brain development characterized by dysfunctional social behaviors and communication. She will seek to identify the brain cells responsible for imagining the world from another person's point of view—an ability crucial to healthy social interaction. She plans to then develop a highly targeted therapy to stimulate those brain cells to alleviate the symptoms of autism.

"Funding from The Hartwell Foundation is critical to this project, since this approach is both novel and risky, but it nevertheless has the potential to help many children and their families," Dolen says.

Each year, The Hartwell Foundation selects a limited number of research institutions to nominate candidates for its Individual Biomedical Research Award. Johns Hopkins has been selected as one of the foundation's Top Ten Centers of Biomedical Research in the United States every year since the program began in 2006, and a total of eight researchers from Johns Hopkins have been named Hartwell Investigators.

Dolen earned an MD from Brown University and a PhD from the Massachusetts Institute of Technology, where she studied the autism spectrum disorder Fragile X syndrome. She then completed a postdoctoral fellowship at Stanford University before joining the Johns Hopkins faculty last year. Her awards and honors include the 2014 Society for Social Neuroscience Early Career Award, the 2008 Joukowsky Family Foundation Outstanding Dissertation Award, the 2008 Sigma Xi Outstanding Graduate Student Research Award, the 2007 Rising Star Award from the Conquer Fragile X Foundation and the 2006 Angus MacDonald Award for Excellence in Undergraduate Teaching.

The primary mission of The Hartwell Foundation is to grant awards to individuals for innovative biomedical applied research that will potentially benefit children in the United States. Funds are provided for early-stage research projects that might not yet qualify for funding from traditional sources.

Johns Hopkins recognizes the Hartwell Individual Biomedical Research Award competition as a component of Rising to the Challenge: The Campaign for Johns Hopkins, an effort to raise $4.5 billion to support students, faculty, advances in research and clinical care, and interdisciplinary solutions to some of humanity's most important problems. The campaign, supporting both The Johns Hopkins University and Johns Hopkins Medicine, was publicly launched in May 2013 and is targeted for completion in 2017. Including the Hartwell awards, $3 billion has been committed so far.