Tilak Ratnanather is one of 14 recipients of Presidential Award for Excellence in Science, Mathematics, and Engineering Mentoring

J. Tilak Ratnanather, an expert in brain mapping and a champion of people with hearing loss, is a recipient of the Presidential Award of Excellence in Science, Mathematics and Engineering Mentoring. 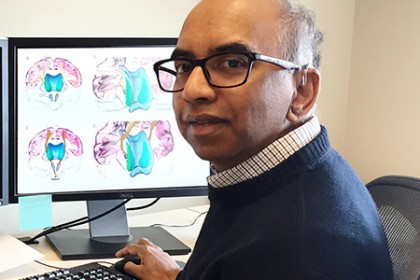 Ratnanather, an associate research professor in Johns Hopkins University's Department of Biomedical Engineering, is one of 14 scientists around the country to be honored with the prize. The recipients will receive their prizes at a ceremony at the White House later this year.

"It is an honor for me to receive this award," said Ratnanather, who also is a core faculty member of the university's Institute for Computational Medicine and its Center for Imaging Science. "Just as my mentors at University College London, University of Oxford, City University London and Johns Hopkins University took a chance on me, I am paying it forward for the next generation of deaf and hard of hearing students who have chosen to thrive in the demanding, challenging and exacting environment of regular college."

The award, announced last week, is given by the White House to individuals and organizations in recognition of the crucial role that mentoring plays in the academic and personal development of students who are studying science, engineering, and math, particularly those who belong to groups that are underrepresented in these fields.

Ratnanather, who was born deaf but learned to communicate by reading lips and using hearing aids, has devoted his career to recruiting deaf and hard of hearing individuals into the science, math, technology, and engineering fields, and mentoring them once they are there. His motivation stems from a belief that if he can coax these individuals into STEM fields, they will contribute a unique perspective, particularly in the auditory related sciences and medicine.

Ratnanather's research interests include shape analysis of brain structures associated with schizophrenia, Alzheimer's, Huntington's, and depression. His work also focuses on deafness and computational problems linked to cochlear and cardiac physiology. Rathnanather himself received a cochlear implant at Johns Hopkins Listening Center in 2012, and he knows firsthand the trials of learning to use it.

"My students are benefitting from my experiences as a deaf person and thus do not have any additional worries associated with their hearing loss," Ratnanather said. "They have rewarded me and others by graduating with honors, getting PhDs, doing postdoctoral work and becoming professors and completing medical school."

In announcing the awards, President Barack Obama credited Ratnanather and the other recipients with helping to cultivate America's future scientists, engineers and mathematicians.

"They open new worlds to their students, and give them the encouragement they need to learn, discover and innovate," Obama said in a prepared statement. "That's transforming those students' futures, and our nation's future too."

In addition to being honored at the White House, the recipients each receive $10,000 from the National Science Foundation. A complete list of winners can be found at www.whitehouse.gov.