More than 3,000 from record applicant pool admitted to JHU's Class of 2019

The Johns Hopkins University has admitted 2,525 students to complete the Class of 2019, selected from a record applicant pool of 24,717. These students joined 540 future Blue Jays who had already enrolled at the university under the Early Decision admission plan. 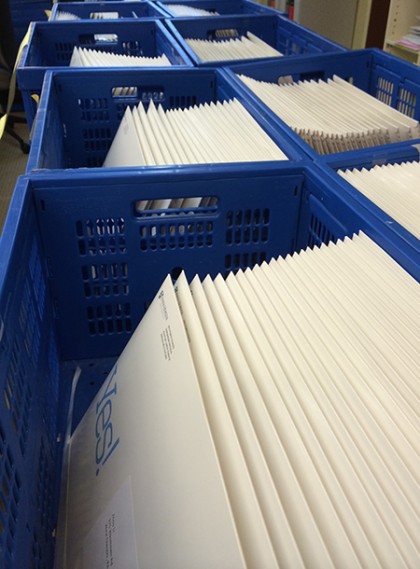 Image caption: Welcome packets for the more than 2,500 regular decision applicants who have been admitted

The class not only breaks university records academically, but it is the most diverse class Johns Hopkins has ever admitted. Nearly 33 percent of the class identifies as underrepresented minorities, and the students come from all 50 states and 62 countries.

The 3,065 students admitted to the Class of 2019 were selected from the strongest applicant pool the university has ever seen. They include award-winning documentarians, founders of businesses and non-profits, patent holders, published authors, and creators of everything from plays, to video game soundtracks, to a self-heating ski boot.

The number of applications this year speaks to the strength of the opportunities that high school students see for themselves at Johns Hopkins, said Ellen Kim, director of Undergraduate Admissions.

"As the Whiting School of Engineering and the Krieger School of Arts and Sciences continue to introduce academic possibilities—such as new minors in marketing and communications, visual arts, and social policy; plus a new major in medicine, science, and humanities—prospective students are excited about their future at Johns Hopkins," Kim said. "With these new academic initiatives plus an enhanced focus on the arts and innovative opportunities for internships, research, and other experiential learning, Johns Hopkins continues to attract high-achieving students eager to contribute to the campus landscape."

Admitted Class of 2019 by the numbers:

Tagged office of admissions, class of 2019 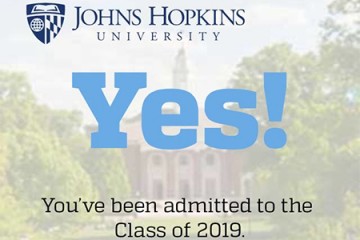