Philanthropist A. James Clark, a trustee emeritus of Johns Hopkins University and Johns Hopkins Medicine and a construction engineer and executive for more than 60 years, died Friday. He was 87. 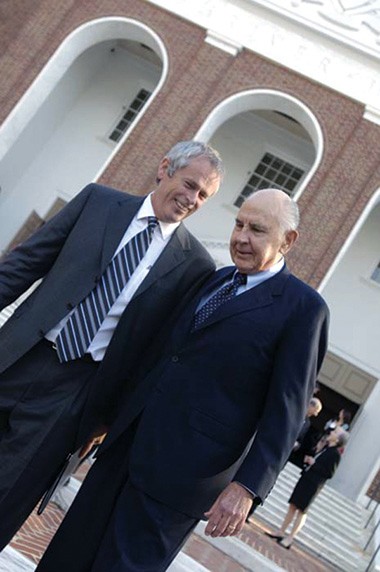 Clark, who served on the university's board for 10 years beginning in 1988, was a major supporter of engineering education and research at Johns Hopkins. In 1998, the chairman and CEO of Clark Enterprises announced a $10 million gift—then tied as the eighth-largest in Johns Hopkins history—supporting construction of a 55,000-square foot biomedical engineering building at Homewood.

"I have spent most of my life in the construction side of engineering, and the success I have achieved is in this field," he said at the time of the Clark Hall gift. "But, in today's world, contributions from all fields of engineering—biomedical, environmental, civil, mechanical, electrical, and all the rest—are vitally important to the future of humanity. I think it's incumbent on all of us who have been successful to provide the financial resources to educate and train our future engineering leaders."

In 2008, he gave Johns Hopkins another $10 million to endow the deanship of the Whiting School of Engineering in honor of his mentor and business colleague Benjamin T. Rome, a 1925 Johns Hopkins graduate he deeply admired.

"Ben Rome was not only my first boss but a wonderful mentor as well," Clark said at the time. "I owe much of my success, and the success of our business, to Ben. He was a great friend and teacher, and I am honored to be able to memorialize his name at his alma mater."

The university awarded Clark an honorary doctorate in 1999, noting that he had originally wanted to pursue architecture at an Ivy League university, but because of "limited finances," instead studied engineering at the University of Maryland. "Architecture's loss has been engineering's gain," the citation said. "Instead of designing buildings, you became one of the nation's foremost builders of them."

"Jim Clark helped transform the architecture of our university, through the buildings he built and the programs he supported across our campuses, from Homewood's Clark Hall to the hospital towers in East Baltimore, to the Benjamin T. Rome deanship of the Whiting School of Engineering," Johns Hopkins University President Ronald J. Daniels said. "We remain grateful for his decades of wise counsel, great friendship, and enduring vision for our university."

Clark had been CEO of Clark Enterprises, the Bethesda, Maryland, parent of companies including Clark Construction Group LLC, one of the nation's largest privately held general building contractors.

"We are deeply saddened by the loss of our friend and colleague," a statement from the company said. "The Clark name is associated with many iconic places in our hometowns. We play ball at Nationals Park and Petco Field, care for wounded warriors at the Walter Reed National Military Center, travel to destinations near and far from the Central Terminal at Atlanta's Hartsfield Airport, and work for a better future at the U.S. Institute for Peace.

"These are just a few examples of the lasting legacy of Jim Clark's life and work."

Clark joined George Hyman Construction Co.—one of Clark Construction's predecessors—straight out of college, rising quickly from field engineer to estimator to executive. In 1959, just nine years after graduating from Maryland, he became the company's vice president and general manager, reporting to Rome.

Clark took over as president and CEO in the late 1960s and, over time, built a nationwide construction company with 4,200 employees in 10 cities. He also expanded the company into real estate, development, private equity and venture capital, and financial markets.