The Johns Hopkins men's basketball team rallied from five-point second-half deficit to defeat Skidmore 61-58 on Saturday night at Goldfarb Gym in the second round of the NCAA Division III tournament. With the win, JHU advanced to the round of 16 for the first time since 1990.

The 15th-ranked Blue Jays (25-4) trailed 50-45 with 7:33 to play but closed on a 16-8 run to secure their 25th victory, a school record. Junior Matt Billups made three field goals in a key three-minute stretch to put JHU in front, and the Blue Jays went 6-for-6 from the foul line in the final 30 seconds.

Senior Jimmy Hammer paced a balanced Johns Hopkins attack with 16 points, Gene Williams added 14, and Ryan Curran had 12. George Bugarinovic finished with nine points and 10 rebounds for JHU, which defeated Keene State 95-87 in a first-round game on Friday night to set up a showdown with the Thouroughbreds.

Johns Hopkins will face Babson, which owns a 27-2 record and is ranked No. 4 nationally. The game will be played Friday; the site has yet to be announced. 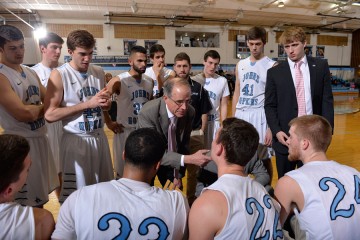 Published Feb 26, 2015
JHU, which hosts Centennial Conference tournament this weekend, owns 22-3 record and is ranked No. 11 among DIII teams