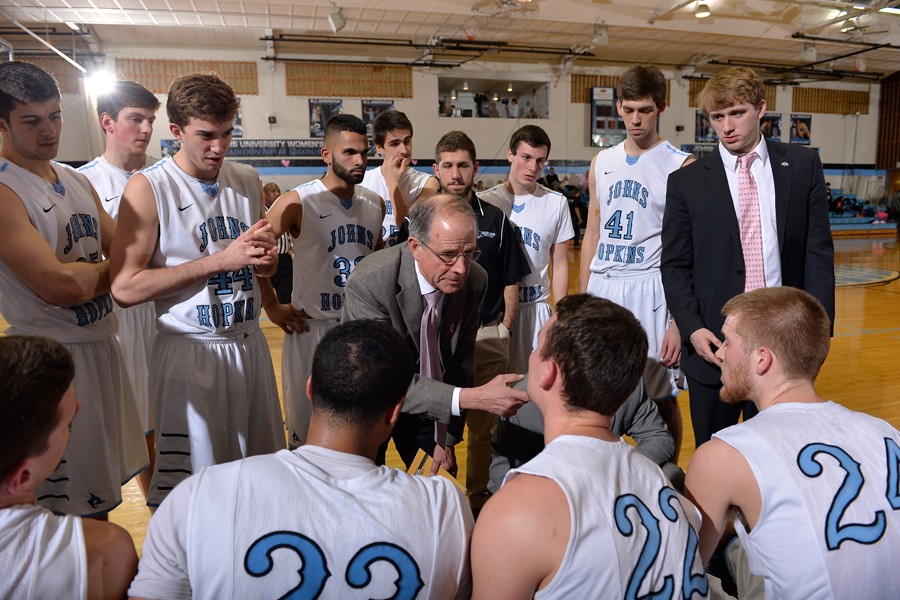 Image caption: Coach Bill Nelson, in his 29th season as head coach of the Johns Hopkins men's basketball team, has guided the Blue Jays to a 22-3 record and a No. 11 ranking in the Division III national poll. 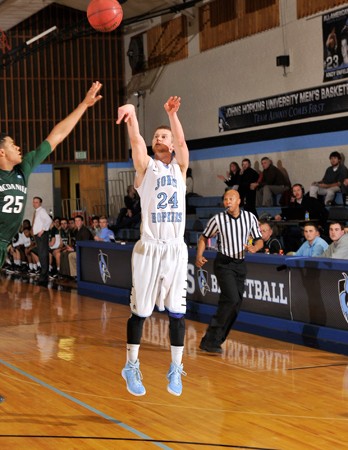 The pithy slogan encapsulated and reinforced the team's new defensive philosophy, which asks each player to hyper-focus on the ball and worry less about the man he's guarding. In the system, defenders rotate to ball movement and then "suffocate" the opponent in possession in an attempt to stymy the other team's offensive options and create turnovers. The system, says its chief architect Jeff Eakins, is largely built on trust.

"It's basically a help defense where you jump to the ball, and you're counting on your teammate to make the right rotation and choke off passing lanes," says Eakins, the team's defensive coordinator who previously coached in the NBA Development League for the Idaho Stampede, then affiliated with the Portland Trail Blazers. "I told [the players] to think of it like five against the ball, where you know where the ball is at all times."

Eakins and JHU head coach Bill Nelson say the team suffered some growing pains as the players learned to implement the new principles. The Blue Jays started last season losing six of it first 10 games. Players missed assignments and perhaps reacted a hair too slow. But then it all clicked. The team went 13-4 the rest of the way, earning a bid to the Division III NCAA tournament for the first time in seven years.

The winning ways spilled over to the current season, in which the Blue Jays hold a 22-3 record and are currently ranked 11th in the nation among Division III teams. Defensively, the Blue Jays are 10th in DIII in points allowed, permitting just 59.2 points per game heading into this weekend's Centennial Conference tournament. Host Johns Hopkins, the tournament's top seed, will take on Gettysburg (15-11) at 8 p.m. Friday at Goldfarb Gym. Dickinson (20-5) and Franklin & Marshall (20-5) will square off in the first semifinal at 6 p.m., and the winners will meet Saturday at 7 p.m. to determine the conference tournament champion.

Nelson, now in his 29th year as JHU's coach, attributes the team's success this season to the players' continued commitment to tenacious defense and a special solidarity among the members of an experienced roster full of upperclassmen. The Blue Jays have four seniors and six juniors, and guard Jimmy Hammer and forward George Bugarinovic—arguably JHU's two best players—have played together for four years.

"Our team has improved each year as this group has matured," Nelson says. "At this level, you often win with juniors and seniors. Sure, at a place like Kentucky you can win with elite-level young players, but this is a different animal. We also have an extremely close-knit group, and they're clearly having fun playing with each other."

Nelson says it's not unusual for players to stay late after practice to play pickup games and just enjoy one another's company. The seniors in particular, Nelson has noticed, dig a little deeper during practice.

Nelson pointed to an early season home loss to rival Franklin & Marshall as a turning point in the team's season. In the 60-51 loss, sophomore forward Ryan Curran came off the bench and made an immediate impact, scoring nine points and grabbing three steals in 18 minutes.

"That was a telling change for us, where we decided to stick Ryan in the starting rotation," Nelson says.

The Blue Jays then went on a school-record 17-game winning streak, picking off three nationally ranked teams in the process, including a 50-46 victory against then-16th-ranked Franklin & Marshall on the Diplomats' home court.

The streak came to an end on Feb. 14 with a heartbreaking 59-57 road loss to ninth-ranked Dickinson. The game featured 11 lead changes and went down to the final seconds. With the score tied at 57 and less than 30 seconds remaining, Nelson wanted to play for the last shot and called a timeout to set up the offense. But an ensuing turnover gave the ball to Dickinson, which hit two free throws for a two-point win.

"I'll take [the blame] for that one," Nelson says. "I called perhaps the worst timeout in my life to screw things up down the stretch. It was a disappointment, but the team responded well, winning the next two games to finish out the season."

Nelson says the current roster is perhaps his most talented group since the 2006-2007 season, when the Blue Jays won a school-record 24 games and advanced to the second round of the NCAA tournament.

In recent years, Nelson says he's adjusted his coaching methods some. Of note, he shortened practice, and the team rarely scrimmages. He wants to keep his players healthy and their legs fresh for games. The freshness has come in handy with the team's defensive approach, which requires a committed effort.

Nelson says that when longtime assistant coach Bob McCone resigned, he saw an opportunity to try something different. He came across the website for the International Basketball Academy, a training program run by Eakins and his father, "Jumbo" Jim Eakins, who played a combined 10 years in the ABA and NBA.

Nelson says he originally just wanted to pick Eakins' brain for new ideas, but the two quickly hit it off.

"Jeff has brought to the team a different approach," he says. "We've always had a strong defense, now we're just doing it in a different way."

Nelson says the team has also relied on the leadership of plays like Hammer, the team's leading scorer at 15.1 points per game who recently became the program's all-time leader in career three-pointers, passing Andy Enfield.

Hammer says he senses more urgency in this year's team coupled with an enhanced work ethic.

"Our offseason workouts were a lot more competitive," he says. "In practice, we compete that much harder. I know I've gotten bigger and stronger. I was like 106 pounds my freshman year, so I had to get bigger to be able to battle with everyone else, and this is a very physical conference."

Hammer agrees with Nelson that the players have gotten better individually. He mentions the stellar play of teammate George Bugarinovic, who was recently named a third team Academic All-American and is a three-time All-Centennial Conference selection. Bugarinovic leads the team in rebounds (7.2), field goals made (135), and free throw attempts (96), and he ranks second in scoring (13.6), field goal percentage (.549), steals (32), and blocks (21). He has also posted six double-doubles this season, with four of those coming in the last six games.

As for the team's high-energy defense, Hammer says the extra conditioning has paid off. Now he wants to put an exclamation mark on his collegiate basketball career.

"I realize this is all coming to an end, so I want to go out with a bang and win the conference championship and make a deep run in the NCAAs," Hammer says.

He says the team found a new level of confidence when it upset the 4th-ranked Dickinson Red Devils 67-54 at home.

"We had a very happy locker room after that one," he says. "And we've been excited to see ourselves moving up in the top 25 standings."

Nelson says the team has put itself into a great position to win an at-large bid to the NCAA tournament, but he's hoping to earn an automatic bid and a high seed.

"We don't want to look beyond the next game," he says.

He's hoping for a few more games to anticipate and suffocate.