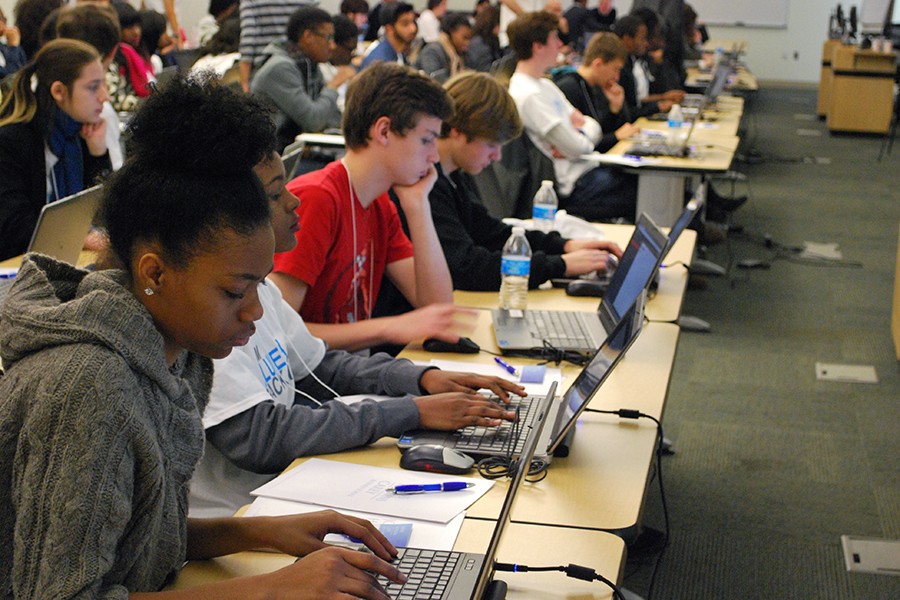 "IBM Bluemix is a cloud-based platform as a service (PaaS) that allows app developers to rapidly build and deploy their apps in a simple, intuitive way," said Michael Digafe, who received a Global MBA degree from the Carey Business School earlier this year and now works for IBM. Digafe came up with the idea to bring dozens of novice programmers to his alma mater, which made this a special event because IBM's hackathons are not typically open to high school students, Digafe noted.

The current Carey students whom Digafe engaged to help plan the hackathon were not sure how the high school students would respond. Dan Givol, a Global MBA student and event co-organizer, said he and his colleagues had a "Field of Dreams moment" when dozens of teenagers began arriving that Saturday morning despite outdoor temperatures were in the 20s. Students proceeded to work for nearly nine hours straight.

"We gave them the option for longer breaks, and to stop, but they all chose to keep going," Givol said. At the end of the day, the students had built a live app that pulls information from Twitter, analyzes it using Watson (the IBM computer that won on Jeopardy), and returns the results via text message.

Johns Hopkins students—representing the Carey Business School, the Whiting School of Engineering, and the Krieger School of Arts and Sciences, as well as Carey's joint Design Leadership program with the Maryland Institute College of Art (MICA)—served as mentors to the high school students throughout the event.

STEM (short for science, technology, engineering, and math) is a critical area of focus for high schools throughout the nation. Otilio Baez, computer technology education specialist at Baltimore City Public Schools, pointed to the importance of hackathons and similar practice environments that demand real-world STEM thinking. The Western and Poly students who participated come from various STEM programs, including biomedical sciences, the district's CISCO networking program, and computer science.

"Here they get to blur the line between theory and practice and extend what they're doing in the classroom," Baez said.

Over the course of the day, he observed students with minimal coding experience applying their knowledge from other STEM fields and getting used to the Bluemix software.

"These types of experiences are invaluable when we talk about preparing them for postsecondary success and being truly career- and college-ready."

Students tweeted their experiences throughout the day; their posts can be found at https://storify.com/CareyAdmissions/hackcarey or by searching for #hackcarey on Twitter.