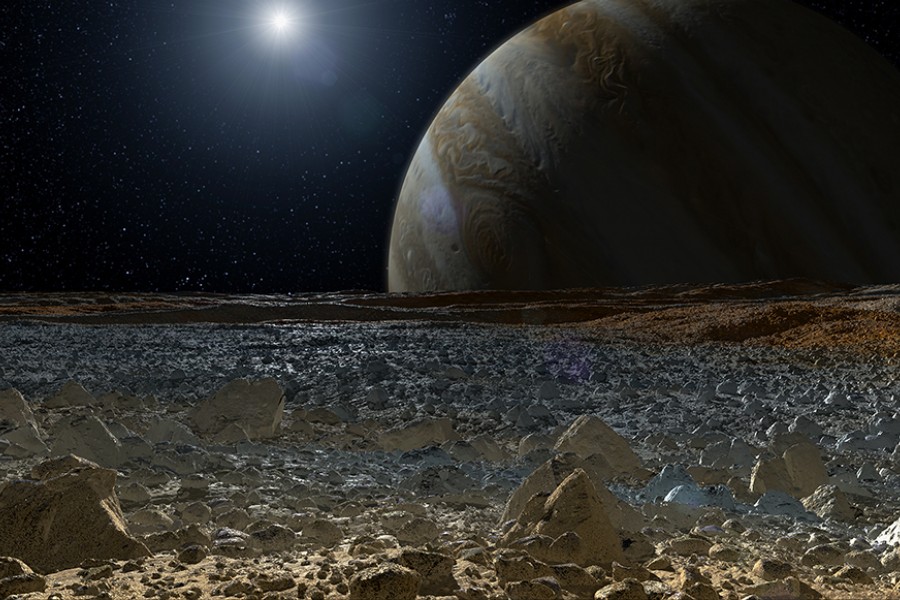 Image caption: This artist's concept shows a simulated view from the surface of Jupiter's moon Europa. Europa's potentially rough, icy surface, tinged with reddish areas that scientists hope to learn more about, can be seen in the foreground. The giant planet Jupiter looms over the horizon.

A scientist at the Johns Hopkins Applied Physics Laboratory is part of a team of researchers that found evidence of plate tectonics on Jupiter's moon Europa. This indicates the first sign of this type of surface-shifting geological activity on a world other than Earth.

Researchers have clear visual evidence of Europa's icy crust expanding. However, they could not find areas where the old crust was destroyed to make room for the new. While examining Europa images taken by NASA's Galileo orbiter in the early 2000s, planetary geologists Simon Kattenhorn, of the University of Idaho, Moscow, and Louise Prockter, of APL, discovered some unusual geological boundaries.

"We have been puzzled for years as to how all this new terrain could be formed, but we couldn't figure out how it was accommodated," said Prockter. "We finally think we've found the answer."

Plate tectonics is the scientific theory that Earth's outer layer is made up of plates or blocks that move, which accounts for why mountains and volcanoes form and earthquakes happen. The surface of Europa—one of Jupiter's four largest moons and slightly smaller than Earth's moon—is riddled with cracks and ridges. Surface blocks are known to have shifted in the same way blocks of Earth's outer ground layer on either side of the San Andreas fault move past each other in California. Many parts of Europa's surface show evidence of extension, where wide bands miles wide formed as the surface ripped apart and fresh icy material from the underlying shell moved into the newly created gap—a process akin to seafloor spreading on Earth.

On Earth, as new surface material forms at mid-ocean ridges, old material is destroyed at subduction zones, which are regions where two tectonic plates converge and overlap as one is forced under the other. However, despite the degree of extension evident on Europa's surface, researchers had not been able to determine how the surface could accommodate all the new material.

Scientists studying Europa often reconstruct the moon's surface blocks into their original configuration—as with a jigsaw puzzle—to get a picture of what the surface looked like before the disruption occurred. When Kattenhorn and Prockter rearranged the icy terrain in the images, they discovered that about 7,700 square miles (about 20,000 square kilometers) of the surface were missing in the moon's high northern latitudes.

Further evidence suggested the missing terrain moved under a second surface plate—a scenario commonly seen on Earth at plate-tectonic boundaries. Kattenhorn and Prockter saw ice volcanoes on the overriding plate, possibly formed through melting and absorption of the slab as it dove below the surface, and a lack of mountains at the subduction zone, implying material was pushed into the interior rather than crumpled up as the two plates mashed against each other.

The scientists believe the subducted area was absorbed into Europa's ice shell, which may be up to 20 miles (about 30 kilometers) thick, rather than breaking through it into Europa's underlying ocean. On Europa's relatively young surface—about 40-90 million years old, on average—scientists have seen evidence of material moving up from under the shell but, until now, no mechanism had been found for moving material back into the shell, and possibly into the large ocean below the ice.

"Europa may be more Earth-like than we imagined, if it has a global plate tectonic system," Kattenhorn says. "Not only does this discovery make it one of the most geologically interesting bodies in the solar system, it also implies two-way communication between the exterior and interior—a way to move material from the surface into the ocean—a process which has significant implications for Europa's potential as a habitable world."

The team's results appear in the Sunday online edition of the journal Nature Geoscience.

In July, NASA issued an Announcement of Opportunity (AO) for proposals for science instruments that could be carried aboard a future mission to Europa.

"Europa continues to reveal itself as a dynamic world with compelling similarities to our own planet Earth," said Curt Niebur, Outer Planets program scientist at NASA Headquarters in Washington. "Studying Europa addresses fundamental questions about this potentially habitable icy moon and the search for life beyond Earth."

Previous scientific findings point to the existence of a liquid water ocean located under the moon's icy crust. This ocean covers Europa entirely and contains more liquid water than all of Earth's oceans combined.

NASA's Galileo spacecraft, launched in 1989, was the only space mission to make repeated visits to Europa, passing close by the moon about a dozen times.

Galileo's many firsts include discovering evidence for the existence of a saltwater ocean beneath Europa's icy surface. The mission officially was ended when Galileo plunged into Jupiter's atmosphere in September 2003 to prevent an impact with Europa. The mission was managed by NASA's Jet Propulsion Laboratory in Pasadena, California, for the agency's Science Mission Directorate in Washington.

For more information about Europa and images of the plate tectonics, visit http://solarsystem.nasa.gov/europa. Information is available online about the Galileo Mission at http://www.jpl.nasa.gov/missions/galileo/.