Susan Wojcicki's JHU commencement address one of 2014's most inspiring

YouTube CEO Susan Wojcicki's speech at Johns Hopkins University's graduation ceremony in May has been chosen as one of the nation's top commencement addresses of 2014 by a professional association of commencement and convocation officers from colleges and universities across the country.

The North American Association of Commencement Officers identified six speakers who gave "inspiring and unforgettable" speeches. Wojcicki, they wrote, "connected with students, faculty, and guests to create a sense of excitement about what the future holds for each of the graduates. Her genuine enthusiasm came through in her remarks. She was a testament to what can happen when you stay humble and take risks."

Wojcicki, who became head of YouTube earlier this year, addressed JHU's Class of 2014 on May 22, sharing personal stories from her own remarkable career and interspersing words of wisdom for the new graduates.

"This class, this generation that's grown up in a digital world, you understand the power of connection like no other class that came before you," she said. "You can make an impact far greater than the engineers and doctors and physicists and governors and writers and cabinet secretaries and 22 Nobel laureates who came before you on this campus. Yes, you. All of you, here, wearing those black hats and black robes. You have opportunities that none of them could have imagined. And now you have an education that will allow you to design and create the future for all of us." 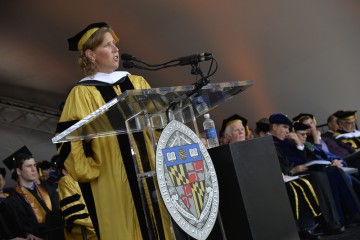