At Hopkins, they stick to spaghetti. "Lasagna noodles, no," said Michael Karweit, a retired Hopkins research professor. "The flat stuff, linguine, we don't use that."

The Johns Hopkins competition, first held in 2006, is the final project of a four-week summer engineering course that attracted high school students from across the country. This year, 120 high school students from 11 nations and 18 states took part in the program on JHU's Homewood campus, while an additional 223 students participated at other locations. Of the program's nearly 2,300 participants to date, roughly 31% have been women, 16% African-American, and 16% Latino, and about 80% have gone on to pursue science and math studies. From WSJ:

Mr. Karweit says it is still "mind-blowing" that thin, brittle pasta can bear so much weight: "There is a real gee whiz factor." Some past winners have withstood more than 130 pounds before failing. 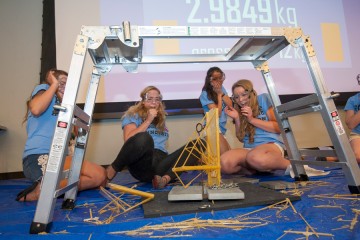