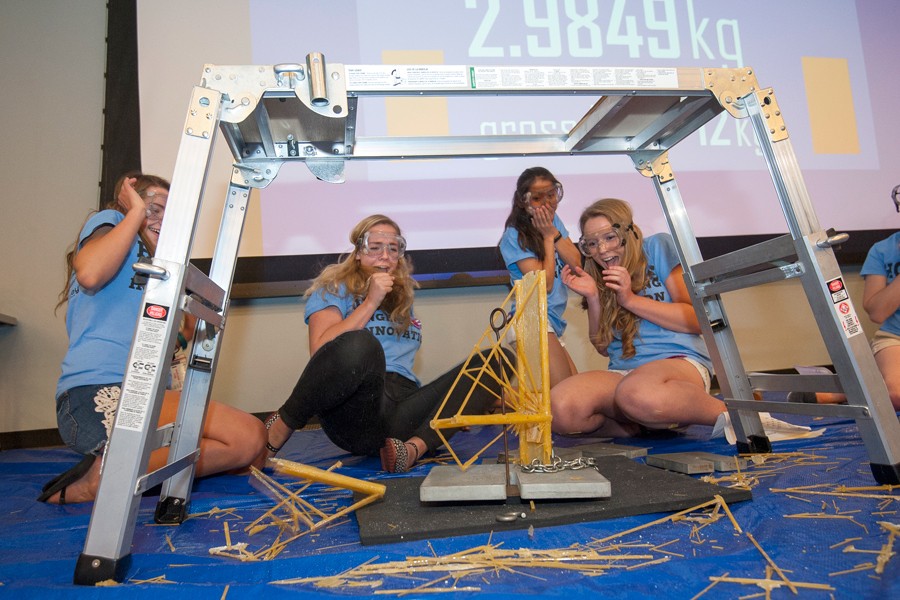 On Friday morning, members of Team "I Can't Believe It's Not Linguini" knelt behind their spaghetti and epoxy bridge at the Johns Hopkins Whiting School of Engineering's annual Spaghetti Bridge Competition. 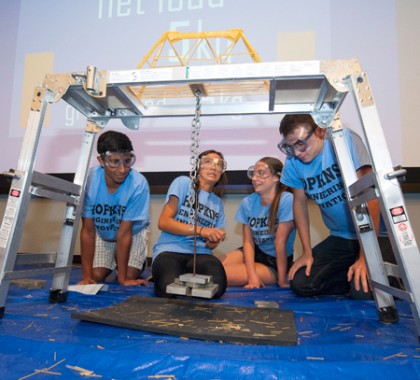 The three high school students—David Treatman, Elise Laird, and Avery Price—grimaced through their safety glasses with every weight they added to the chain suspended from their bridge's decking. At the front of the Hodson Hall auditorium, an emcee provided spirited play-by-play commentary while the other 37 teams of students and their families watched the huge electronic scoreboard and live video of the bridge that were projected on three large screens.

Offered by WSE's Center for Educational Outreach, the Spaghetti Bridge Competition is the culminating event of Engineering Innovation, a four-week summer program held at more than a dozen sites, from California to Maryland. The curriculum is designed to give rising high school juniors and seniors a taste of college-level engineering and get them interested in studying science, technology, engineering and math fields when they go to college.

This year, 120 high school students from 11 nations and 18 states took part in the program on JHU's Homewood campus, while an additional 223 students participated at Engineering Innovation's other locations.

The program has been a huge success. Since its launch in 2006, more than 80 percent of Engineering Innovation's 1,951 alumni have gone on to pursue college studies in science and engineering.

One kilogram … five … eight … 12 … 20. The audience cheered and then held its collective breath.

Another block was added, and then came the inevitable crack and crash as 105 pounds of weights (plus a half-pound of pasta, give or take) hit the floor. The crowd erupted.

Ultimately, I Can't Believe It's Not Linguini's bridge dominated the 38-team field and took home the top prize by holding an impressive 44 kilograms,the equivalent of 97 pounds.

Editor's note: An earlier version of this article misstated the number of students who took part in the program this year