Injectable foam designed to be more effective than tourniquets, gauze 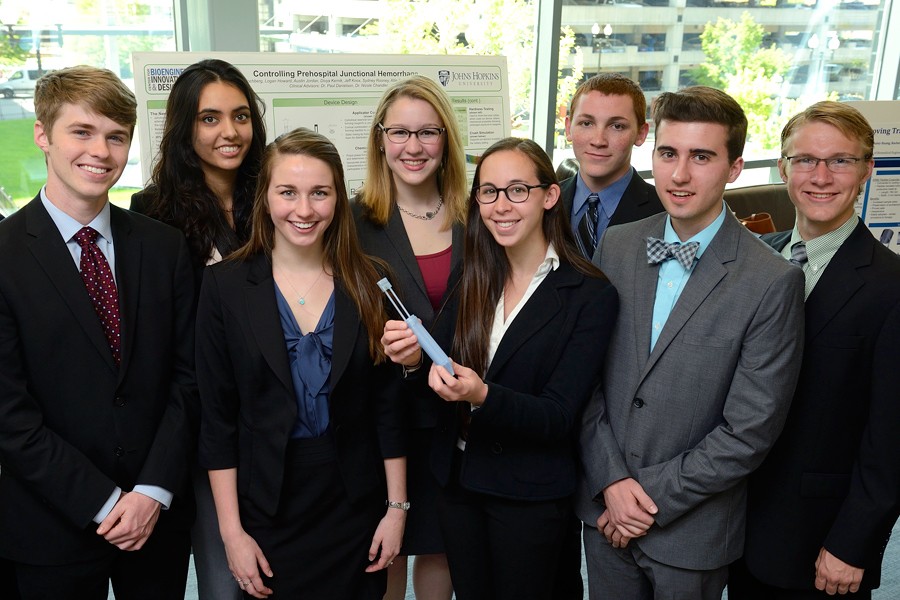 Without prompt care, a badly wounded soldier can easily bleed to death while being transported to a distant medical station. Two traditional treatments—tourniquets and medicated gauze pads—often cannot stop the blood loss from a deep wound at the neck, shoulder, or groin.

To give these soldiers a fighting chance at survival, Johns Hopkins undergraduates have invented an injectable foam system designed to stop profuse bleeding from a wound where a limb or the head is connected to the torso. The students' invention is designed to apply pressure and curb blood loss during the critical first hour, during which a wounded soldier is moved to a site that provides more-advanced medical help.

The new battlefield treatment is needed, the students say, because a tourniquet or a gauze pad with a clotting agent is difficult to apply effectively to deep wounds at these body sites. In addition, the precise source of blood loss in such wounds is not always easy to find.

"The problem is that damage from bullets and bone fragments deep inside a junctional wound is not always visible from outside the body, and a regular clotting agent may not be able to reach the origin of the bleeding," says Sydney Rooney, leader of the biomedical engineering student team that sought to solve this problem. "We came up with a foam injection system that fills the wound area and blocks the blood loss."

Rooney says that the goal is to prevent wounded soldiers from losing more than half their blood volume before they reach a medical facility. The aim is to arrive there within 60 minutes, the so-called golden hour during which trauma care is most successful.

"Our project has been dealing literally with a life-and-death matter," she says. "At the end of the day, that provided some extra motivation for our team."

Last fall, she and seven other students chose to develop this battlefield blood-loss prevention system from a list of possible class projects. Their prototype emerged from the undergraduate design team program in the Department of Biomedical Engineering, which is shared by the university's schools of Medicine and Engineering.

To get a sense of what happens when someone is wounded, the students conducted experiments with a gel that mimics the consistency of human tissue and used a rod to create "blood vessels" filled with water within the gel. Team members then carved "wounds" into the gel to simulate the bleeding process. To stop "blood" loss, the students identified two liquid chemicals that, when mixed, rapidly form a polyurethane foam.

"The foam fills up the wound opening, hardens, and applies pressure to the walls of the cavity," says team member Allie Sanzi. "This should lead to more-effective targeting and treatment at the source of the bleeding."

The two chemicals—a polyol and a diisocyanate—that produce the foam are stored separately in canisters within the injector device before they are needed. The students designed the canisters to keep the chemicals stable in military conditions at temperatures up to 100 degrees Fahrenheit for at least one year. The injector is about the size of a whiteboard marker. On the battlefield, the soldier administering the treatment would mix the two chemicals with a mechanism inside the injector and then, pushing down the plunger, would insert the expanding foam into the wound.

The project was proposed and supervised by two surgeons at All Children's Hospital, a Johns Hopkins Medicine facility in St. Petersburg, Fla., that serves as a clinical training site for medics in the Green Berets, Navy Seals, Army Rangers, and Marine Special Forces who require pediatric emergency response experience. The student inventors were able to meet with the surgeons and these teams to discuss the project and prototypes.

One of the sponsoring surgeons, Paul D. Danielson, a military veteran who is now medical director for pediatric surgery at All Children's, says that the device looks quite promising. "I don't think it's pie in the sky at all," he says. "I think it's a very viable solution to a problem that's been plaguing us on the battlefield."

All Children's pediatric surgeon Nicole Chandler says she was impressed by the undergrads' solid grasp of design and clinical issues. "I think the students did a wonderful job on this project," she says. "Their understanding of some medical concepts was beyond that of many medical students. They came up with a simple, intuitive design that has the potential to save many lives."

The students showcased their device at the annual Johns Hopkins Biomedical Engineering Design Day event, organized by the university's Center for Bioengineering Innovation and Design. At the event, held in May, the battlefield wound treatment received a faculty award for best design process and a second-place audience choice honor for its poster. In addition to Rooney and Sanzi, the members of the team were Katie Hochberg, Logan Howard, Austin Jordan, Divya Kernik, Jeff Knox, and Ernest Scalabrin.

The students have received university approval to begin animal testing of the prototype system but have not yet begun such procedures. No human testing has taken place. The students plan to work with their faculty advisers and medical sponsors to determine how to move the project toward further testing and eventual use in military settings.