"We are thrilled that the Big Ten men's lacrosse tournament will take place at Johns Hopkins in 2016," JHU coach Dave Pietramala noted. "Homewood Field is the most historic venue in the sport of lacrosse, and we look forward to adding this prestigious event to the long list of championship-level tournaments that have been held here."

The Big Ten added men's and women's lacrosse for 2015. On the men's side, Johns Hopkins will be joined by long-time rival Maryland, Michigan, Ohio State, Penn State, and Rutgers.

The 2015 men's tournament will be hosted by Maryland on April 30 and May 2, the Big Ten announced.

Johns Hopkins first fielded a men's lacrosse team in 1883, seven years after the founding of the university. The Blue Jays have won 44 national titles, including nine since men's lacrosse became a sanctioned NCAA sport. 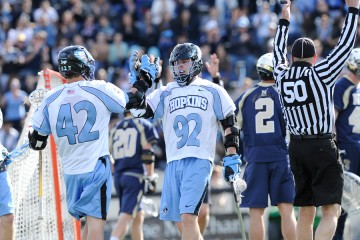 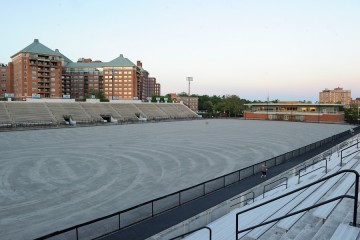 A fresh look for summer

Published June 3, 2014
Homewood Field's artificial turf is being replaced for first time since 2005