JHU's Homewood Field gets a fresh look for summer

Venue's turf is being replaced for first time since 2005 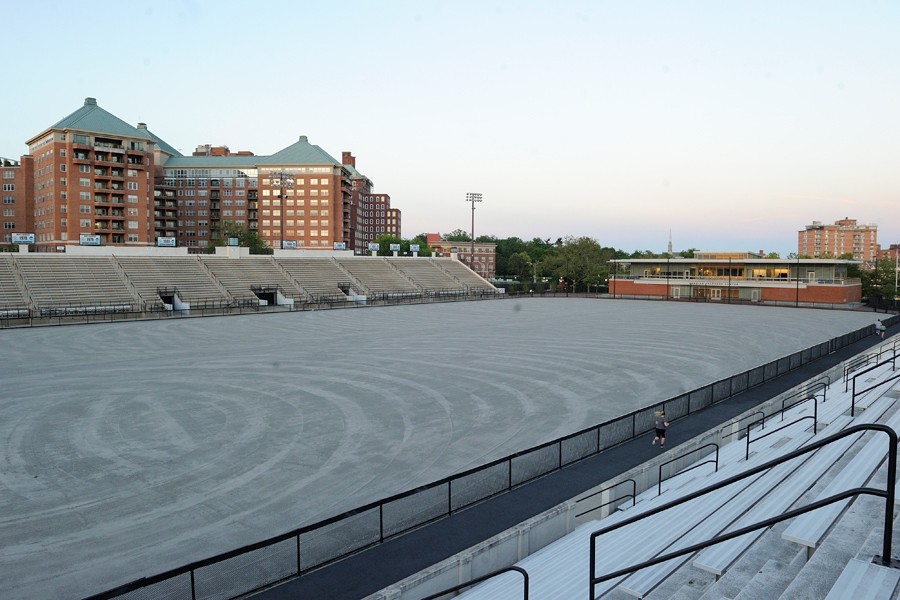 No, University of Maryland students didn't pilfer the Homewood Field playing surface under cover of night (although kudos would be in order if they'd pulled off such a stunt). The field's expiration date simply had passed.

This month, crews will roll out a new turf on Homewood Field, replacing a surface that has served Johns Hopkins' varsity teams—lacrosse, field hockey, football, and soccer—since 2005.

"Ten years is just about the shelf life of a turf, especially one that gets used as much as ours with so many teams competing on the same field. Fibers get thinner. Weaknesses develop at the seams," said Jon Gregory, assistant athletic director for facilities. "We got a good life out of this turf, and now it's time for a new one."

Just after Memorial Day, the field was stripped down to its stone base and then prepped with a gravel and sand mix. In the coming weeks, Shaw Sports Turf will replace the old surface with a new one, the same synthetic turf system used by the Baltimore Ravens at M&T Bank Stadium. The ingredients? Forty rolls and 40,000 pounds of fiber turf and 700,000 pounds of sand/rubber infill, all held together by 140 gallons of glue.

Once installed, the green field will feature a new black border with "Johns Hopkins" painted in blue at one end zone and "Blue Jays" on the opposite side. The soccer sidelines and end lines will be in yellow, with all other line markings in blue and black.

"We're going for a bold, clean look in keeping with the university's new identity initiative," Gregory said. "The black used in the non-playing areas will allow us to use various logos and text throughout the year, such as the Big Ten logo come lacrosse season."

The four-week project is expected to be completed by June 20. While Homewood Field is undergoing the renovation, the university's summer camp outdoor activities will be held at the Johns Hopkins at Eastern campus track, Wyman Park field, and the practice field behind the O'Connor Recreation Center.