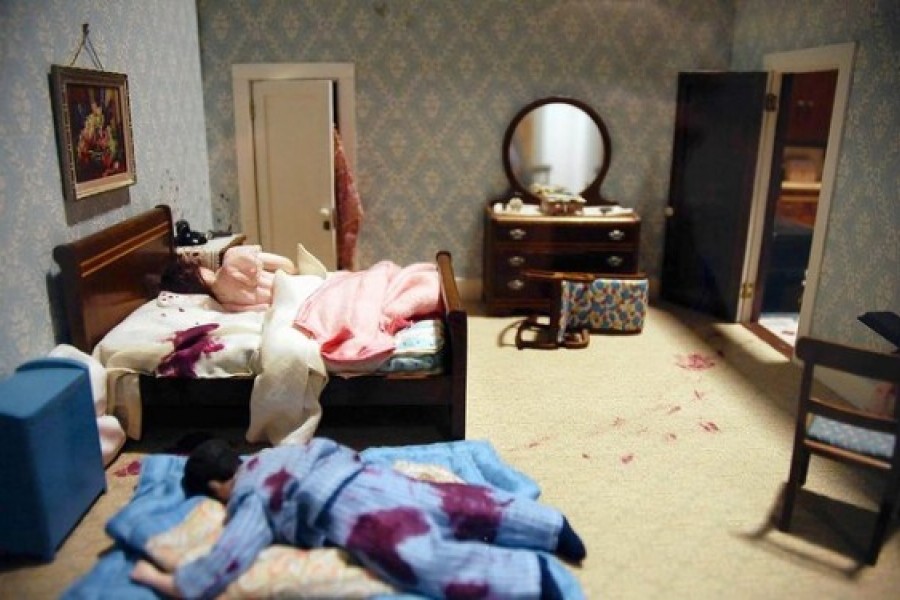 Image caption: A detail of a crime scene from one of the Nutshell Studies.

Frances Glessner Lee spent the first five decades of her life as a sheltered, intellectually frustrated heiress. The daughter of a Chicago industrialist, she was allowed to marry but not obtain an advanced education herself. It wasn't until 1931, when she was 52 years old, that she was able to pursue the subject that fascinated her: murder. Specifically, forensic pathology and the investigation of human death. 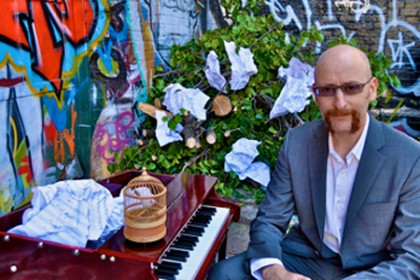 Through her brother she met one of his Harvard University classmates, who became a medical examiner in the Boston area. She endowed Harvard to create a legal medicine department, one division of which was the Harvard Seminars in Homicide Investigation, which she led. During the 1940s and '50s she conducted these workshops about crime-scene investigations, which were attended by police detectives and medical examiners.

The visual aids for her lectures were a series of dioramas she made in the 1930s and '40s of crime scenes on a dollhouse scale. Called the Nutshell Studies of Unexplained Death, they are an impressive display of autodidactic creativity. Inspired by actual murder cases, Glessner Lee made to-scale miniature crime scenes that include furniture, home décor tchotchkes, bedding, wallpaper—and dead bodies, blood spatters and trails, and murder weapons. They're macabre. They're spectacular. And when Harvard's Department of Legal Medicine was dissolved in 1966, the Nutshell Studies were given to Maryland's Office of the Chief Medical Examiner in downtown Baltimore.

The dioramas continue to be used for forensic education. They have also drawn the understandable fascination of artists and academics. George Mason University American history PhD student Erin Bush created the Death in Diorama project in 2011. Filmmaker Susan Marks directed the 2010 documentary Of Dolls and Murder about the studies. They've inspired a photography book, and now they've inspired a concerto.

The concert will be streamed live on the Johns Hopkins Ustream channel.

The Hub caught up with Smooke to talk about what makes the Nusthell Studies such an inspiration for the toy piano's musical palette.

Tell me how you came to be interested in the Nutshell Studies and what prompted you to compose something inspired by them—especially for toy piano?

Ever since I came to Baltimore I've been very interested in Baltimore's place in the country, crime in Baltimore, and Baltimore's associations with criminality. And when I found out that these Nutshell Studies existed, it just seemed like the most quintessential Baltimore thing anyone could ever make. They only thing that would make them more Baltimore is if John Waters was featured in one.

Part of my interest is their association with forensic science and their actual scientific usage, which goes to the intellectual community in Baltimore, coupled with the fact that they have to do with crime, which speaks to Baltimore's reputation. And part of my interest is just how quirky and outsider they are—when you think about the important cultural institutions in Baltimore, one of the ones that first comes to mind is the American Visionary Art Museum. And these would be absolutely at home anywhere in the Visionary Art Museum. So since they're on the one hand outsider but on the other very scientific, they seemed so perfect for writing for extended toy piano.

How so? What about this combination of aesthetic and intellectual content makes sense for toy piano? What is it about the toy piano, its sound quality or colors, that fits these dioramas?

And analogous to the way Glessner Lee used these dollhouses in order to get us to think about crime in different ways, I'm trying to do that with the toy piano. I'm not just using the basic music box sound of the toy piano but I'm using all sorts of extended techniques—bowing the pieces of metal that create the sound, rubbing the soundboard with pieces of metal, dampening the tines, strumming them, creating glissandi using a guitar slide. So it starts from this idea of the toy piano's nostalgia for childhood, and in the same way the dollhouse aesthetic gets twisted in the Studies, I'm twisting the toy piano aesthetic.

You've written for and performed with the toy piano before. Do you enjoy tapping into the nostalgia and taking it somewhere else?

Exactly. I also like that there really isn't a traditional performance practice for the toy piano. If I get onstage with a piano, there's hundreds of years of comparison that people just automatically will draw upon. If I choose to play inside the piano and do all sorts of weird things, people will immediately think of John Cage or George Crumb, and if I'm just playing on the keyboard, people will think of Chopin or Beethoven or other composers. With the toy piano the associations are much more personal and much less attached to a cultural tradition.

How does it fit into the chamber orchestra in this piece?

It's a wind ensemble. It's 35-plus players, all of whom are playing percussion or wind instruments, and one double bass. And it's amazing. As far as I know, toy piano has never been placed in a context like this. The wind ensemble makes the largest unamplified sound you'll ever hear, created by human breath and human effort, so to have this giant sound enveloping this incredible fragile, little toy is kind of astonishing. Even having thought it through when writing it, nothing quite prepared me for the first rehearsal. It's a really big sound.

And the students seem to be having fun with the piece. It's experimental and a bit outside the usual Peabody experience, so to see them really embracing this experience has meant a lot to me. And Harlan Parker, who is the conductor of the Wind Ensemble and who really spearheaded this project, has been incredibly supportive in bringing a fantastic musicality to everything and getting the students to open their minds to this project. It's been fantastic.