The Johns Hopkins men's lacrosse team built a 6-1 lead early in the second half and rolled to an 11-6 win against rival Maryland on Saturday afternoon at Homewood Field in the 111th meeting between the two schools.

The No. 9 Blue Jays (7-3) got three goals from Wells Stanwick and two apiece from Ryan Brown, Brandon Benn, and Holden Cattoni to thrill the Homecoming crowd of 9,553. It was JHU's second consecutive victory following a three-game skid that included losses to Syracuse, Virginia, and North Carolina, all of which are ranked among the top eight nationally.

Johns Hopkins has won 10 of the past 13 matchups against Maryland and leads the all-time series 70-40-1. Next season, both teams will be part of the Big Ten Conference.

The Blue Jays return to action Monday when they visit Mount St. Mary's at 4 p.m., and they visit Navy on Friday at 7 p.m. 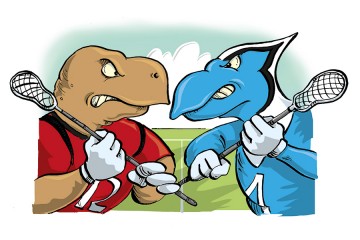