He reads April 3 from his ninth novel, 'The Testament of Mary,' as part of the President's Reading Series at Johns Hopkins

Colm Tóibín is among the best-known contemporary Irish novelists, hailed by The Observer as one of Britain's Top 300 Intellectuals. He has received numerous awards and honors, including the Lambda Literary Award, and several of his works have been shortlisted for the prestigious Booker Prize, and he is currently a professor at Columbia University. 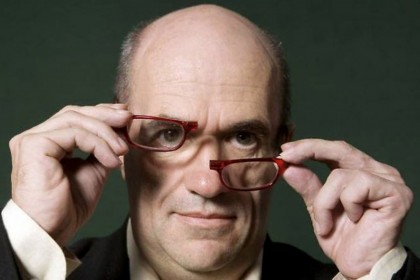 On Thursday, Tóibín will read from his ninth novel, The Testament of Mary (2012), as part of the President's Reading Series. The novel tells the story of Jesus' mother Mary, who, according to the book, does not believe her child is the son of God. Testament, then, according to one reviewer at The Atlantic, is a fictional attempt "to turn to Christ's mother to get the story straight." In 2013, Testament had a brief run on Broadway, for which it earned a Tony nomination for Best Play.

We recently spoke with Tóibín about literature and the writing process. The conversation had all the candor—and quiet humor—of his acclaimed writing.

You've said before that you don't like being called a "storyteller." Why?

I have a friend called Howard Hodgkin, an English painter, and Hodgkin hates being called a colorist. If they're calling you a colorist as a painter, then they're not quite taking you seriously: they feel that your work is merely decorative in some way or other, and that it doesn't have any sort of proper structure. Part of the idea of being a storyteller suggests that somehow or other the source of your inspiration is oral and natural. That's a particular problem with English people: they seem to think that everyone in Ireland is a writer, and very few of us are writers. And that somehow or other writing comes naturally to us, which it doesn't. So people love saying to you, "Oh, you Irish—you're such MAR-velous storytellers, all of you!" And the answer is, "I work quite hard on structuring what I do, or on putting shape on things." That isn't really a way to say, "Oh, you're a marvelous storyteller"— but "You're not a great writer." In other words, you can say, "Oh, the Native Americans were great storytellers," but they were none of them novelists. Or, "Up in Harlem, they're all marvelous storytellers!"

I teach at Columbia, and pass by people every day—neighbors in my office—who are in Postcolonial [studies]. I don't get Postcolonial: it's a puzzle to me. It's a category that seems reductive to me. I realize that the canon—in other words, what we accept as the great works of literature that we must upend to—I realize that that has changed greatly over the last 30 years. And it has changed greatly because of feminism, for example, and because of pressure from what might have been once called the margins or economic margins. But to actually have a section called Postcolonial is to, I think, reduce the power of the literature that might come from such a country, or in fact suggest that it doesn't have a centrality.

Those in Postcolonial, they all have a difficulty with Ireland. Because Ireland, being where we are, we're obviously post-colonial: we were colonized and then we got independent. But it's very hard to read Joyce and Yeats as Postcolonialists without also trying to read them as centralists—central figures in the Modernist camp. So I suppose I was lucky that I came to reading before any of these categories started. I do think Postcolonialism as a thing will fade, but I think, by the time it fades, it will have nourished the central canon enormously.

Within gay studies, it's very difficult to handle Shakespeare and Marlowe, for example. The idea of there being such a thing as a queer sensibility … this arose recently because I've written a book about Elizabeth Bishop, and one of the queries that came back to me said, "Would I like to add a section about her poetics being a Lesbian Poetics?" I read the words "Lesbian Poetics" and thought, "Oh my God." And it was a serious query!

I do understand the need at a certain point to say … you know when [literary critic] Lionel Trilling, for example, wrote his book about E.M. Forster, he did not know Forster was homosexual—it did not occur to him. And afterwards Maurice was published well after Forster's death. And of course that changed everything, to some extent. It's a complicated business, but if you decide that Forster must be in Gay Studies, where do you then put Virginia Woolf? If you think that Joyce is Irish Studies, well, what do you do about Ulysses? So I suppose I'm just … I mean, my view is old-fashioned. But I think you have to take them both. I mean, take Forster as both an important novelist in a central tradition, and as someone who was homosexual. And you have to deal with that.

In Columbia, for example, when I was teaching my first year, one of my students came up to me and said, "Professor, we've already done Jonathan Swift in British 18th Century." I said, "Did anyone mention that he wrote everything he wrote in Ireland? And that Ireland was extremely important to him?" And the student said, "No, we didn't know he was in Ireland." And I realized that whoever was giving that course had missed an essential element in the making of Swift as a writer and as a pamphleteer, and even … well, everything he did. So you realize that there are times when you need—coming from an Irish perspective, coming from a gay perspective—you need to bring things up to date. I mean, some people have not moved at all in their teaching.

You've called the gay tradition in writing "the secret dotted line that runs right through Western literature." Do you think writing contains the trace of the author's secret self?

I wonder if it's true with almost every writer, that there's some private self, and there is another self. I mean I hate to use words like "ego" and "id"—I don't really know what they mean. But there's a private self and there's another self. And sometimes, you're releasing energy from the private self in your work, more than you are from the self that everybody knows. And some of the drama that comes in all writing comes from that release.

In the case of Henry James, it's extreme. You don't find that in George Eliot, to a great extent, although it's possible to read, for example, the character of Gwendolen in Daniel Deronda as a secret self of George Eliot. In other words, as a spirited young woman going all instinct, or something that was within her somewhere that she released in that book. With James, however, the idea of things that people don't know, or that somebody knows and then everybody knows, will be explosive. That's nourished the drama of his work enormously. I suppose also in the case of anyone who's gay, there's always the trace of some time when you didn't want anyone to know that.

In a short essay for The Guardian, you described your writing room in Dublin. Your chair, you wrote, is "the most uncomfortable ever made," and causes pain "in parts of the body you did not know existed."

You know those modern ass-less chairs that have been designed especially for your back to sort of linger on? I had someone tell me I should get one of those because I spend so much time at a desk. And I think, "Well, that would ruin everything—the comfort."

What advice do you have for young writers?

I suppose the thing really is, you could suggest they might finish everything that they start. And the reason for that is, certainly with me, what happens is that something—an image, a memory, or something known, or something half thought of—stays in our mind, at some point or other it becomes a rhythm, and you write it down. Part of that is, you know it; you sort of know what you want to do. The chances are high of wanting to abandon it halfway through on the basis of, it really ceases to interest you because you know it already. And then you have to really push yourself to realize that other people don't know it. And that you're writing for communication, and that is not a private activity. Therefore you have to go on working—that's what the real work is maybe. But if you're young and starting off, it's so easy to abandon something at that point thinking, "Oh yeah, I'm not sure there's any more I can gain from the writing of this." And the answer is: You don't matter anymore. Get to work.

How do you know when to end a book?

I think you're often wrong by a few paragraphs. I tend to control things very carefully so that I know in advance where it is I need to go. I'm often out by a few paragraphs, and I'm often OK. With a story, you often need a last paragraph that really is beyond you. You either need to bring it down softly so it looks like nothing, or bring it up so that you're soaring over the whole story. You really have no idea what to do as you're coming to the end, and it requires an awful lot of time alone, and silence, and erasing, adding, just sitting alone, just thinking or not thinking. You can't finish a story on a Monday and get it to someone on a Tuesday. It probably needs a few months before you're sure. So don't even write a story for a deadline because there's always something at the end that won't come to you immediately, that's not an obvious part of the narrative.