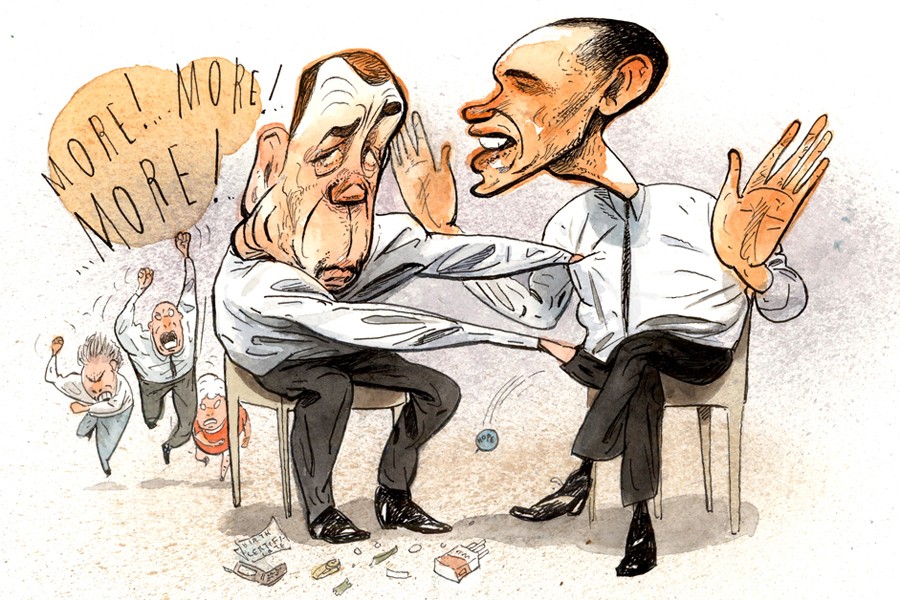 "Beauty is in the Eye of the Deranged." 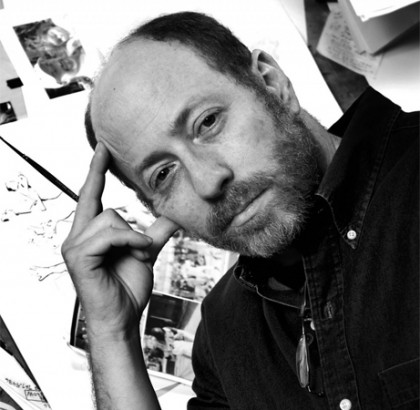 That's the title of the talk illustrator Steve Brodner will deliver on March 3 at Johns Hopkins University.

Brodner is one of the most respected political cartoonists alive. Spanning almost four decades, his work has appeared in numerous major American publications, including The New Yorker, Rolling Stone, The New York Times, Harper's Magazine, Esquire, and Vanity Fair.

He's drawn Obama as a Black Panther, Palin as Fraulein Maria, and Bieber as a monkey. His many awards include the Hamilton King Award and the Aronson Award for Social Justice Journalism.

Lewis Lapham, editor of Harper's Magazine, once called Brodner "a born arsonist," comparing his "incendiary spirit" to the likes of Twain, Mencken, Goya, and Thomas Nast. The comparison is appropriate. Brodner's work is subversive and elicits strong reactions from people of every political stripe.

I recently caught up with Brodner by phone at his home in New York to talk with him about satire, politics, and … sushi.

You've described caricature as "inside-out sushi." Can you talk about that?

Inside-out sushi is when you go to a sushi bar and they sometimes serve you the sushi with the rice on the outside of the seaweed. Right? Do you eat sushi? You know what I'm talking about, where the sticky rice is outside? That's my attempt at making an analogy as to what caricature can be when it's doing its job, which is to bring to the surface, to tease to the surface, that which is under the skin, that which is usually hidden. Caricature—for it to be serving its highest function and to be truly defined as classical caricature—is something that carries insight. The drawing process, then, is actually a way of depicting insight in visualized code. It's kind of an infographic about a face.

How do you go about turning an idea inside out?

This requires having knowledge about the subject. You have to have read, boned up, been exposed to news stories and books, and maybe if you're lucky, you've seen the person alive—or in some cases very unlucky. Based on this knowledge, you're able then to not just draw faces and features of faces. You're also able to do what I think is the real work of caricature, of satiric commentary, which is this: to use the features of the face as tools, as elements that can be manipulated to make a literal point that expresses how you feel and what you know about that person. Caricature without knowledge of the subject is just, for me, a casual parlor game of making big things bigger and small things smaller, and I think you can probably program a computer to do that.

Do you think caricature has an important role in political discourse?

The more media can get below the surface and talk about how the machine works or the mechanics work, then democracy is safer. The less there is of that, the more news there is that's like … you know, I don't know about your local news station, but here in New York, it's about murders and fluff and sports and weather, and that's the local news. And people have no idea what's behind their politicians, why politicians really do things. This is why we need newspapers. If we can hold onto them somehow, then we'll be much more secure. But I'm really worried that we can't. And as newspapers go, so do we [cartoonists].

What do you think about the future of political cartoonists?

I really don't know where political cartooning is heading. I don't see it in a healthy place. Cartoonists are creatures of print, and print is being every day stripped away. Every person who cancels their paper subscription—and I'm one of them—means that print is weakening.

Cartoons were something that came with the paper, like your horoscope and the comics and the editorials. You know, you bought the paper, and all these wonderful things—Dear Abby—came with it. These things made newspaper entertainment. When I was a kid—I'm going to be 60 this year—newspaper was one of the ways people had entertainment. In the evening, a lot of people would gather in front of the newsstand, and the Daily News would come at 7 o'clock. It would have the sports scores for the games that day, it would have results from Aqueduct Racetrack—all kinds of important stuff to these guys. The evening news had short articles written in common language. It was a total entertainment experience: gossip columns, fashion stuff, and everybody loved the comics. So editorial cartoons came in that package. Cartoonists were hired because editors wanted their ideas driven home with pictures.

Do your own ideas ever change during the drawing process?

For the sake of narrative, you can't really create a political cartoon, or a good piece of satiric art, unless you're leading with your point. Unless you have clearly in your mind the direction you want to go in. That said, quite often when you start something, you realize the thing wants to be something else. When you engage in any kind of creative act there's a conversation that begins between you, what you know, and your subconscious. And after a while you may say, "You know, I don't need most of this stuff here. I may have to just carve a lot of this stuff away." So the thing that changes mostly when you're doing a piece is the design of it—the way to get to the point.

How do you teach your students to "get to the point"?

What's most important is, how do you present a story? That's what illustration is. You have all these elements. Now what's important and what's not important here? What should stay and what should go? What should dominate, what should recede? And if you can start thinking like that, then your illustrations will be tremendous. As a teacher I can tell you this thing I'm talking about is really difficult for students. They don't really feel in control, and they don't know how to get in control. I keep telling them it's about sketching. So, you get your drawing down to one beautiful line, and that's probably the result of many lines you've made that have helped you develop an opinion about where the line should go. Sometimes you can be more eloquent with just a line. When you make a single beautiful movement, people will get it.

Has there been a unifying theme throughout your cartooning career?

Let me start out by saying that illustration is different from cartooning—I'm not strictly a cartoonist. I've been involved in trying to drag the ideas of caricature and satire and cartooning into the world of illustration, which is a very difficult task sometimes. So I've been trying to push the envelope, sharpen the potential for visual statements in different media. I started out doing cartoons about Watergate and Vietnam, and here I am all these years later doing Chris Christie and the Olympics. I don't make a great deal of money, but I'm a happy person, and I think that's worth something: to be happy in your work.

Brodner will visit Johns Hopkins University March 3 to present "Steve Brodner: Beauty Is in the Eye of the Deranged/40 Years of American Satirical Art & Reportage." The talk and slide show, co-sponsored by Homewood Art Workshops and Homewood Arts Programs, will begin at 5:30 p.m. in room 101 of the F. Ross Jones Building in the Mattin Center.