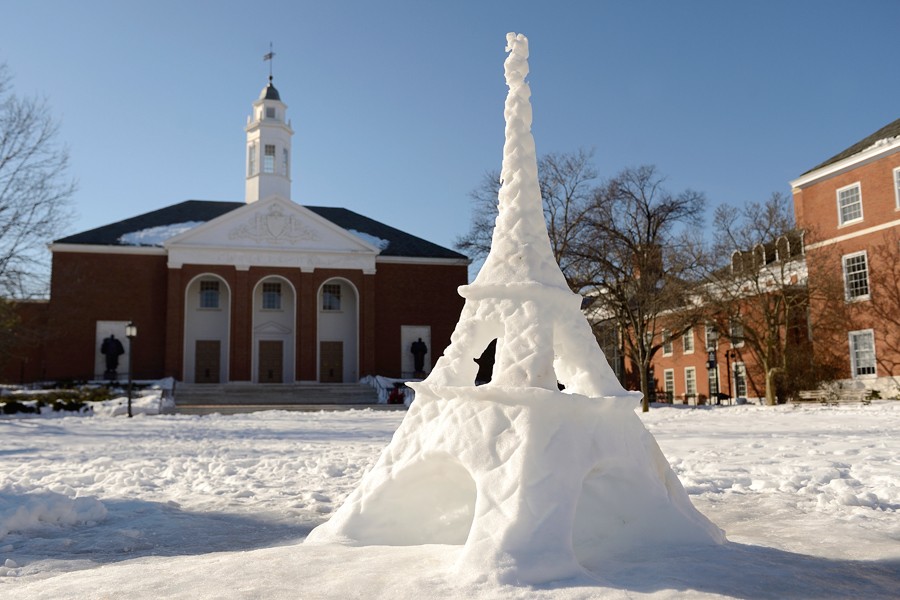 They say there's nothing quite like Paris in the springtime—except perhaps the engineering quad in the wintertime. Students, faculty, staff and tour groups traversing the Wyman Quad on the Johns Hopkins University Homewood campus Monday enjoyed the joie de vivre created by having their own replica of La Tour Eiffel constructed (painstakingly, we assume) out of snow. We'd love to hear from the engineers ... or, er, artistes responsible.

And now (channeling Paul Harvey) ... the rest of the story.

We heard late yesterday from the students responsible for the aforementioned sculpture (which we assume by now is somewhat less spectacular). They have the pictures to prove it.

"We weren't sure if you actually wanted to know the identity behind the Eiffel Tower sculptors, but here's our story.

"We are both sophomores at the school. Alice Jiang is a molecular and cellular biology premed, and I, Katie Moosic, am a biomedical engineering major, museums and society minor. We both share a common love of Paris and snow. (On the first snow day, we built an Olaf snowman like the one from Frozen, which is coincidentally pictured right below the tower in the Hub article). Alice has been to Paris multiple times, and I just recently came back from the Paris intersession abroad program taught by Professor Rodini.

"Last Thursday night, my roommate and I decided to take a walk around campus to appreciate the freshly fallen snow. We passed by all of the snowmen built that day, and saw some pretty creative ones. We got to talking, and all of a sudden, we were planning to make a snow Eiffel Tower should we have another snow day. The following day we went out to the lower quad around 3:30 and began construction. We built up a huge pillar of snow and began packing and shaping until it resembled a pyramid. The skinny top was added on later, as were the balconies along the sides. We used spoons and knives to carve and smooth out the various parts. Towards the end, it was a race against the sunset to try and finish before it got too dark. We didn't end up leaving the quad until around 7 that night. One of the coolest things that happened while we were building was all the people walking up to us and asking how we did it and if they could take a picture."

So, grand mystère solved, as it were. 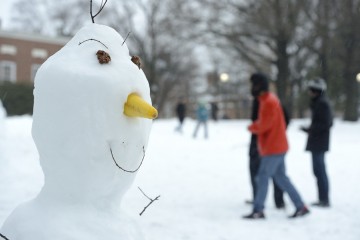 Published Feb 14, 2014 Photos
Nearly a foot of snow falls on campus, and JHU students take to the hills