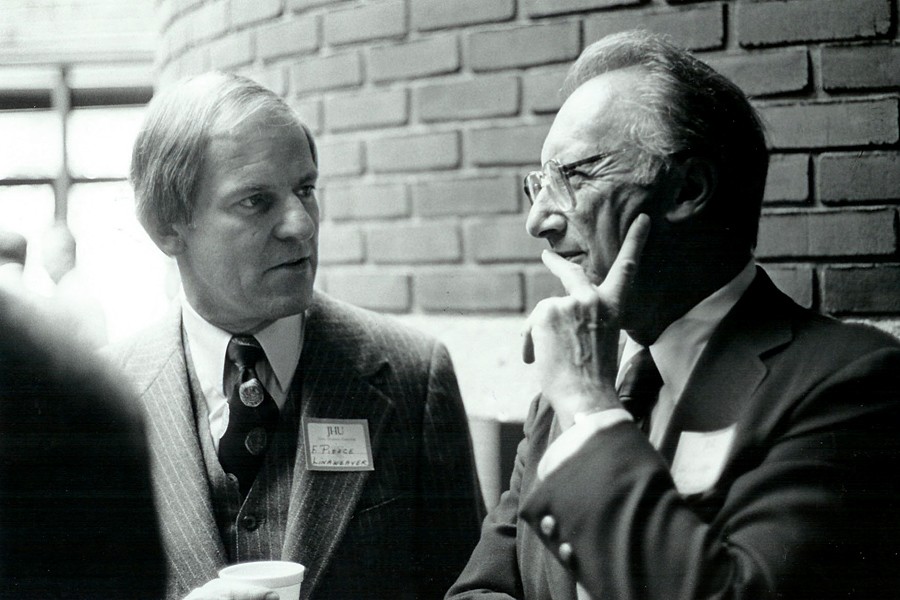 Image caption: Willard Hackerman (right) talks to F. Pierce Linaweaver ’55, ’65 PhD—who at the time was president of the Johns Hopkins Alumni Association—at the opening ceremony for the Whiting School of Engineering in 1980.

Willard Hackerman, longtime president and CEO of the Whiting-Turner Contracting Company, a 1938 civil engineering graduate of Johns Hopkins University, and a former university trustee, has died. He was 95. 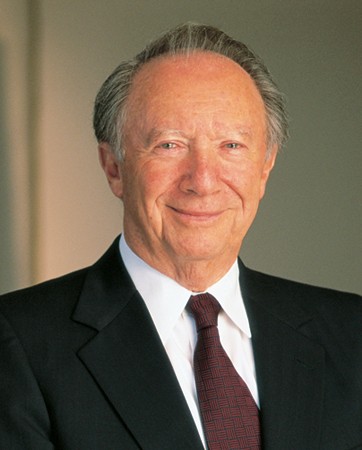 Hackerman led the effort to re-establish the university's stand-alone engineering school in 1979 and was instrumental in securing the school-naming gift from the estate of his mentor, G.W.C. Whiting.

"Willard Hackerman was a fiercely proud alumnus who had a profound impact on our School of Engineering and our entire university," Johns Hopkins University President Ronald J. Daniels said. "The integrity, humility, excellence, and humanity that were hallmarks of his leadership at Whiting-Turner also steered his work at Johns Hopkins. Our campus landscape and our academic mission both bear his fingerprints, and for that we are ever grateful."

Hackerman and his wife, Lillian Patz Hackerman, have been ardent Johns Hopkins supporters. In 2010, the Computational Science and Engineering Building, which opened on the Decker Quad in 2008 as a headquarters for advanced interdisciplinary research crossing the borders of engineering, computer science, mathematics, and medicine, was rededicated as Hackerman Hall.

They funded the Willard and Lillian Hackerman Chair in Radiation Oncology at the Johns Hopkins School of Medicine, construction of the Hackerman-Patz Patient and Family Pavilion, and the Hackerman Research Laboratories at the Sidney Kimmel Comprehensive Cancer Center. They also provided major support for the Robert H. and Clarice Smith Building at the Wilmer Eye Institute.

"Willard's impact on the Johns Hopkins University, and on the G.W.C. Whiting School of Engineering, has been tremendous," said Ed Schlesinger, Benjamin T. Rome Dean of the Whiting School. "His professional accomplishments and his commitment to philanthropy are exemplary, and we are proud to count him among our graduates. Willard was the force behind the re-establishment of the Whiting School as a separate school of engineering and, in this role, helped provide the vision that has come to define the school today. Over the years, he has supported our faculty and has offered valued counsel and advice to my predecessors. His commitment to our students—from providing them with scholarships and internships to hiring our graduates—has provided lasting opportunities to generations of young engineers."

The Hackermans have been leaders in Baltimore and Maryland civic life and devoted patrons of the arts. Willard Hackerman served on the state's first Commission on Economic Development and on the Maryland Higher Education Commission. He was a member of the boards of the University of Maryland School of Medicine, the Maryland Science Center, and the Baltimore Symphony Orchestra. He has also served on the board of the Maryland Health and Higher Education Facilities Authority. He received an honorary doctorate from Johns Hopkins in 1990 and has honorary degrees from four other educational institutions.

Hackerman grew up in Baltimore's Forest Park neighborhood. After graduating from Poly at age 16 in 1935, he enrolled at Johns Hopkins, where he convinced the registrar to let him pay the $450 annual tuition in monthly installments.

Hackerman earned his civil engineering degree from Hopkins at age 19 and was hired by Whiting-Turner, where he worked under Whiting, the company's co-founder who had begun the business in 1909 with LeBaron Turner, a classmate from the Massachusetts Institute of Technology. In 1910, Whiting bought out his partner and led the company until 1955, when he chose the 37-year-old Hackerman to succeed him.

Today, Whiting-Turner's portfolio includes some of the the nation's most prominent shopping malls, elegant embassies, and well-known landmarks. It ranks as the fourth-largest domestic general builder in the U.S. and has 33 regional offices in addition to the headquarters in Towson.

"On a personal level, I am deeply grateful for the friendship, advice, and counsel that he extended to me from the time I arrived in Baltimore," Daniels said of Hackerman. "I will sorely miss his extraordinary kindness, his large heart, and visionary leadership. He represented the best of Hopkins."