Whether it's a mug full of fresh-brewed coffee, a cup of hot tea, or a can of soda, consuming caffeine is the energy boost of choice for millions who want to wake up or stay up.

Now, researchers at Johns Hopkins University have found another use for the popular stimulant: memory enhancer.

Michael Yassa, an assistant professor of psychological and brain sciences at Johns Hopkins, and his team of scientists found that caffeine has a positive effect on our long-term memory. Their research, published by the journal Nature Neuroscience, shows that caffeine enhances certain memories at least up to 24 hours after it is consumed.

"We've always known that caffeine has cognitive-enhancing effects, but its particular effects on strengthening memories and making them resistant to forgetting has never been examined in detail in humans," said Yassa, senior author of the paper. "We report for the first time a specific effect of caffeine on reducing forgetting over 24 hours."

The Johns Hopkins researchers conducted a double-blind trial in which participants who did not regularly eat or drink caffeinated products received either a placebo or a 200-milligram caffeine tablet five minutes after studying a series of images. Salivary samples were taken from the participants before they took the tablets to measure their caffeine levels. Samples were taken again one, three, and 24 hours afterwards.

The next day, both groups were tested on their ability to recognize images from the previous day's study session. On the test, some of the visuals were the same as those from the day before, some were new additions, and some were similar but not the same.

More members of the caffeine group were able to correctly identify the new images as "similar" to previously viewed images rather than erroneously citing them as the same.

The brain's ability to recognize the difference between two similar but not identical items, called pattern separation, reflects a deeper level of memory retention, the researchers said.

"If we used a standard recognition memory task without these tricky similar items, we would have found no effect of caffeine," Yassa said. "However, using these items requires the brain to make a more difficult discrimination—what we call pattern separation, which seems to be the process that is enhanced by caffeine in our case."

The memory center in the human brain is the hippocampus, a seahorse-shaped area in the medial temporal lobe of the brain. The hippocampus is the switchbox for all short- and long-term memories. Most research done on memory—the effects of concussions in athletes, of war-related head injuries, and of dementia in the aging population—focuses on this area of the brain.

The research is different from prior experiments because the subjects took the caffeine tablets only after they had viewed and attempted to memorize the images.

"Almost all prior studies administered caffeine before the study session, so if there is an enhancement, it's not clear if it's due to caffeine's effects on attention, vigilance, focus, or other factors," Yassa said. "By administering caffeine after the experiment, we rule out all of these effects and make sure that if there is an enhancement, it's due to memory and nothing else."

According to the U.S. Food and Drug Administration, 90 percent of people worldwide consume caffeine in one form or another. In the United States, 80 percent of adults consume caffeine every day. The average adult has an intake of about 200 milligrams—the same amount used in the Yassa study—or roughly one cup of strong coffee per day.

Yassa's team completed the research at Johns Hopkins before his lab moved to the University of California, Irvine, at the start of this year.

"The next step for us is to figure out the brain mechanisms underlying this enhancement," Yassa said. "We can use brain-imaging techniques to address these questions. We also know that caffeine is associated with healthy longevity and may have some protective effects from cognitive decline like Alzheimer's disease. These are certainly important questions for the future."

The lead author of the paper is Daniel Borota, an undergraduate student in Yassa's lab who received a Provost's Undergraduate Research Award from Johns Hopkins to conduct the study. 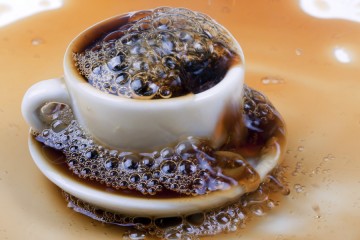