We've covered the top Hub news stories of 2013, but the Hub offers more than news.

This list looks at the top 10 feature stories of 2013—we think if them as long reads (some much longer than others).

These are leisurely morning-coffee reads, curl-up-with-a-cup-of-tea-in-front-of-the-fireplace reads, the sorts of stories you've been setting aside for months, meaning to come back to, but never quite finding the time. We've pulled them together into a nice tidy list in the hope that, as 2013 winds down, you can find a few quiet moments to read some of our top feature stories from the past year.

9. Swimmer Anastasia Bogdanovski is living out her dream | Jan. 1, 2013 | 1,348 words Competing for her adopted home country of Macedonia, JHU sophomore has been setting national records

8. Three soon-to-be graduates share their Johns Hopkins journeys | May 4, 2013 | 2,472 words With graduation near, the Gazette sits down with three undergraduates—two traditional, one not so—to discuss how the Johns Hopkins experience changed them and what the future holds.

3. Hey kid, what do you know? | June 3, 2013 | 3,609 words Researchers in the Johns Hopkins Laboratory for Child Development explore the minds of infants and children

2. Johns Hopkins unveils new Undergraduate Teaching Labs | Aug. 1, 2013 | 985 words The 105,000-square-foot facility, which opened in September, brings together under one roof undergraduate labs and faculty in the departments of Chemistry, Biology, Biophysics, and Psychological and Brain Sciences; and the undergraduate Neuroscience program. 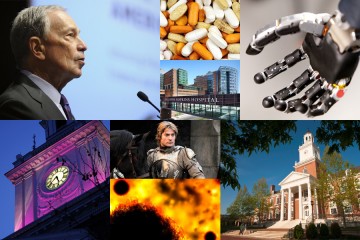 Published Dec 23, 2013
A look at our 10 most popular headlines from the past year