JHU's Hannah Kronick among Sports Illustrated's 'Faces in the Crowd'

Junior Hannah Kronick, a member of the undefeated Johns Hopkins women's soccer team, is one of seven athletes from around the world featured in the Sept. 30 installment of the long-running Sports Illustrated feature "Faces in the Crowd." The feature, which first appeared in the magazine in 1956, spotlights the accomplishments of unknown or amateur athletes.

"Kronick, a junior forward at Johns Hopkins, was named the National Soccer Coaches Association of America D-III Player of the Week a second straight time after scoring three goals against Stevenson and Washington College," SI writes. "Leading the team in points at week's end (20), she has helped the 9-0 Blue Jays reach a program-best No. 2 ranking."

Kronick is also the subject of a feature article that appeared Thursday in The Baltimore Sun. 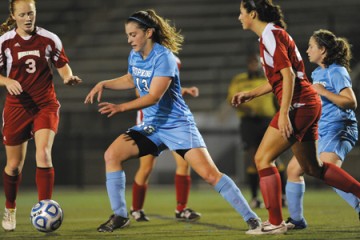