Earlier this year, Dean Smith, director of the Johns Hopkins Press's Project MUSE, experienced working with a university press from the author's point of view. Smith authored an introduction for a new edition of the JHU Press' Football in Baltimore and also wrote Never Easy, Never Pretty: A Fan, A City, A Championship Season, a chronicle of the Baltimore Ravens 2012-13 championship season. In August, he wrote about both book projects on his blog, Director's Musings. 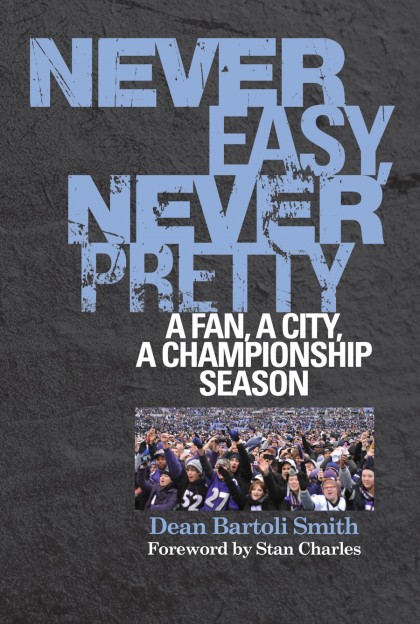 Never Easy is much more than a celebration of one football team. It's a thoughtful consideration of a city's and a fan's relationship with the game through life. The book is equal parts memoir, history of football in Baltimore, and story of the Ravens improbable Super Bowl run. Smith talked about the book in an interview with his publisher, Temple University Press, and the Hub caught up with him by email to talk about applying a poet's mind to sportswriting, the pull of fandom, and the allure of great sports stories.

I haven't had the chance to read the full book yet, but I did appreciate the structure you've given it suggested by the introductory chapter, which appears to overlay the Ravens 2013 season with your own experience of growing up watching football in Baltimore. That made me curious: For you, why do youthful experiences with sports teams leave such an indelible impression? I ask because when reading your introduction, I was reminded how little I care about football or most sports these days—reading the Sunday sports page is enough for me—but I grew up in Dallas, and as much as I don't pay attention to the Cowboys now if I never again see Dwight Clark catch that pass from Joe Montana in the back of the end zone in the 1982 NFC Championship game, that will be fine by me. So now that you've spent a book exploring some of that, what's the pull there—for you, what lights that initial spark? Was it as specific as carrying Unitas' helmet and pads off the practice field when you were 7?

Meeting Johnny Unitas lit that initial spark and the Colts went to the Super Bowl that year to play Dallas. I remember being worried at halftime against the Cowboys—like we weren't going to win and then we somehow did in one of the strangest games ever played. As a kid, you think it's going to happen every year and it never did after that. We came close in 1977, on Christmas Eve against the Raiders, and that game still hurts. I can still see that Longines scoreboard clock at Memorial Stadium with five minutes remaining and we had the ball and ran the ball three straight times. The Colts enthralled my entire family—it was something we all could relate to and talk about. The Ravens erased all of that pain for me. Beating Denver in the playoffs brought back memories of the Colts and my relatives who'd passed away without a team in Baltimore. I thought about them that night. I wanted to tell their story, too. I also kept Unitas in my thoughts throughout the book—his black high-top cleats and a crew cut that made him look like everybody's hard-working father in Baltimore.

What, if anything, does being a poet bring to your writing about sports? I ask because thinking and talking about sports can be an inherently reflective pastime, from simply reliving a play or series from a game to talking about teams and players and whatnot over time. It has a social history, though it's very much experienced in the moment and, as a poet, I imagine your brain quite nimbly thinks about writing, about that combination of fleeting moments as witnessed or remembered from a distance in different ways than a daily newspaper's sportswriter might.

In writing the book, I continually searched for compelling ways to describe a play or a moment in a game just as you would in a poem. My poems are really compressed short stories. Working out the lines of a poem and progressing down the page stanzaically can be as challenging as quarterbacking a team or even a narrative downfield into the end zone. Some chapters stumped me and mired me in the ditch just as my poems do. The late poet Stanley Kunitz often spoke about the "psychic energy" of a poem. The Ravens played with an emotionally charged sense of their own destiny. I attempted to harness the force that drove the Ravens to a first down on 4th and 29 in San Diego, an electrifying and incomprehensible bomb to Jacoby Jones to tie the game in Denver and a Super Bowl victory. I started most of the chapters with excerpts from football poems to create a more literary feel to the narrative. I wanted a certain physicality to the language and I didn't want to sound like a sportscaster. City against city on the gridiron is an epic battle. Football has become our version of Greek Tragedy, of David taking on Goliath or Ray Lewis facing Peyton Manning. The 2012 season will live on forever in Baltimore just as the 1958 NFL Championship season does. I wanted my children and their children to remember this Super Bowl season 25 years from now.

It looks like you did a healthy amount of research, both about the Ravens and football in Baltimore, and about your family, while writing Never Easy. How was processing and organizing all that information given the brisk production schedule this book had?

The book was researched and written in 75 days. There were so many story lines to the season that it was difficult to include them all. I lived in fear of forgetting something. I hired a researcher who works with me at Project MUSE to mine the press coverage of every game in Baltimore and in the opposing team's city so I could fill in the pieces of the stained glass window and then add elements of historical context. I tried to include as many diverse vantage points as I could find, including a moment at a Hopkins lacrosse game in 2012 when John Harbaugh and Bill Bellichick stood together behind the Blue Jays bench. Colt radio announcers Chuck Thompson and Vince Bagli created an incredible atmosphere with their phrases and commentary and were as important to me growing up as the players themselves. I was trying to create a sense of urgency in the writing that was similar to the way they called games.

I'm glad you mentioned The NFL Game of the Week in the intro, for as much as I don't watch sports now what NFL Films does with games is consistently gripping—and it wasn't until I became a journalist that I gained any appreciation for how difficult those compressed stories of games must be to make. You were doing your own version of that for the book: what was your organizing philosophy/approach for compressing a season into a singular narrative? I realize some moments stand out and invite inclusion—such as Ray Rice's fourth-and-29 conversion, Jacoby Jones' 77-yard touchdown reception in the AFC Championship game—but these are the great moments, and as your "never easy, never pretty" title indicates, the 2012 Ravens season was one of getting the win in an almost time-to-make-the-donuts sort of way.

I knew what the title was before I started writing—and it came from the Super Bowl podium and the comments of John Harbaugh and Joe Flacco. It became a rallying cry for the season starting with a one-point Week 2 loss against the Eagles, and the games provided structure. The Introduction and Chapter 7 were written first and in a way that would set up what was to follow. The Introduction is designed for the fan to chart their own football history. Chapter 7 is entitled "Blue Horsehoes" and it explores the city's transition from Colts to Ravens within the context of a playoff game that for once didn't include the bitterness of the past but a future without Ray Lewis. I watched videos, listened to the radio coverage, heard the voices of the players and tried to create the sights, sounds, and smells of the game similar to those classic John Facenda narrated films in the 1960s and '70s. Never Easy, Never Pretty is a tribute to those grainy Super 8 days of the NFL, to the books we read as kids like Great Moments in the NFL and to generations of Baltimore football fans.

Finally, I get the impression that going to the Super Bowl for you was a bit of a dream come true but also just a great coda to a great sports story. As a sports fan, are there other sports stories you'd like to see happen? You know what I mean: The Red Sox's 2004 World Series win—that's a great sports story. The Saints winning Super Bowl XLIV—great story. As a guy who loves life's character actors, I'd love to see the Detroit Lions win a Super Bowl and the Mexican national team take a World Cup title. Any sports stories you'd like to see happen?

I am always drawn to the underdog in any sport. I'd pull for the Kansas City Chiefs in a Super Bowl with their new coach. I'd like to see the Bears win a Super Bowl and the Cubs become relevant. It would be great if the U.S. could win a World Cup someday. If the Red Sox make it to the World Series, I will root for them for reasons far beyond baseball just as I rooted for the Yankees in 2001. Of course, I'd like to see the Orioles win another World Series.