Her story: A Johns Hopkins senior walks in memory of her mother 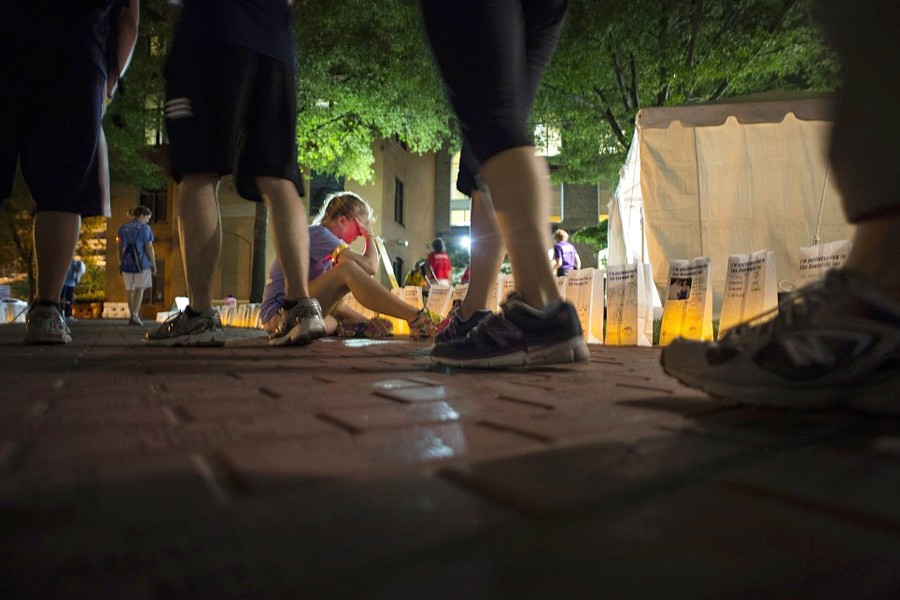 Image caption: Allysa Dittmar sits by her mom's luminaria at the the AFSP Out of the Darkness community walk in Washington, D.C., in June.

Editor's note: Allysa Dittmar, a senior at Johns Hopkins University, wrote the following essay for the American Foundation for Suicide Prevention's Summer 2013 newsletter. It is republished today on World Suicide Prevention Day with the permission of AFSP.

In 2011, I spent a weekend in Washington, D.C., with my boyfriend. Two years later, on the weekend of June 1, 2013, we returned to Washington, D.C. Not for sightseeing this time, but instead to participate in the Out of the Darkness Overnight Walk along with several of our best friends.

Held by the American Foundation for Suicide Prevention, the Overnight is a 16-18 mile journey throughout the night that walkers embark upon to raise awareness and funds for research, advocacy, and prevention. Walkers come from all stages of life, from teenagers to grandparents. Many, like me, are survivors of suicide loss. Others battle with suicide, depression, and other mental illnesses. And others, like my boyfriend and best friends, are supporters of the cause.

But all of us share one common goal—to prevent a tragedy from occurring that is far too common. Today, suicide deaths have surpassed deaths from motor vehicle crashes in the United States.

My mom was one of the 38,000 people who lose their lives to suicide each year in the U.S. She struggled with severe depression and anxiety in the last year of her life. At that time, I was 19, a freshman at Johns Hopkins University. In the summer of 2011, I stayed in Baltimore and took classes at Hopkins. I hadn't seen my mom in such a long time and after finally finishing classes and packing everything up, I eagerly made the long drive back home to New Jersey. My mom wasn't at the door to greet me with her warm and welcoming embrace. That day was August 9, 2011.

With the support of my family and friends, I decided to go back to school, just two weeks after her death, to start my sophomore year of college. The first year was difficult. I struggled with anxiety. I'd cry in public if something reminded me of mom. My heart would hurt terribly if I saw a mother and her child. Holidays were the worst. But my boyfriend and friends stuck with me through thick and thin. Then I started to join more clubs and activities. I began running. I focused on schoolwork as I knew my mom would have wanted. I ended up earning a 4.0 GPA for the semester and have done so every semester since. Then, in June 2012, I traveled to San Francisco to participate in my first Overnight along with my dad, my mom's sister, and my uncle.

To walk with others who knew what each other have gone through and still go through was incredibly healing. As I wrote in my blog about the San Francisco Overnight, here, greetings were received with hugs. Here, we were a unique community that understood each other's struggles, grief, confusion, and pain. Through the Overnight, I formed friendships that will last for a lifetime. I met people who also lost their mother, and reunited with them a year later at the next Overnight.

One of the most vivid memories I have of the San Francisco Overnight was the distribution of the honor beads. Honor beads of varying colors were distributed to the walkers, acknowledging one's personal connection to the cause. My dad represented the red beads—the loss of a spouse/partner. Another man, Ken (whom I reunited with a year later at the Overnight in D.C.) placed orange beads around his sister's luminaria, representing the loss of a sibling. White beads represented the loss of a child. Gold: a parent. Purple: a relative/friend. Silver: a soldier. Green: struggled personally. And blue, a supporter of the cause. While it was painful and saddening to watch my dad place his beads around my mom's luminaria, the group joined hands afterwards, sharing their pain, but also, new strength and hope. Throughout the walks in both San Francisco and D.C., when I saw others wearing gold beads, I felt an instant connection with them.

After experiencing my first Overnight, I truly started to heal.

Equally precious to me was to walk with my boyfriend and best friends this year in Washington. Aaron, my boyfriend, and Suzy attend Johns Hopkins with me. When my dad and I found my mom, Aaron was the first person I called, while still in shock and tears. He was just about to board his flight back home in California. But two days later, Aaron flew back to the East Coast to be with me. Hayley has been my lifelong best friend. She came right over to the house after I called Aaron and stayed by my side for weeks. To walk with the three of them meant so much to me. To hear Suzy's cheering voice during the 16.4-mile trek and her raving over the peanut butter sandwiches that the AFSP staff handed out at the rest stops was priceless. To cry with Hayley over the loss of my mom and others' loved ones was healing. To walk with Aaron, seeing all the monuments along our walk that we had visited just two years ago, not knowing at the time that we were about to plunge into the unknown, brought back so many emotions. And for Aaron to hold my hand throughout the walk just as he had done over the past three years, was precious.

One of my favorite moments of this year's Overnight was having the privilege to meet Melissa d'Arabian, [Food Network] television host and author of Ten Dollar Dinners. She, too, lost her mom to suicide while in college. When I met her backstage, she welcomed me with a warm hug and we bonded instantly. Like many other walkers, we shared stories about our mothers and our experiences with coping with losing a mom to suicide. Melissa is now a role model to me—she carried on, pursuing her passion of cooking and became a wonderful mother to four girls. With her bubbly personality and sheer determination, Melissa has become a public voice for those who struggle on a daily basis and those who have lost their loved ones to suicide, showing us a ray of light amidst darkness.

Like Melissa, I will always walk and be a voice for my mom. Hayley wrote a beautiful piece about my mother for our fundraising page, and she captured who my mom truly was: a vibrant, beautiful, and loving woman. She was the best cook anyone had encountered, she played the piano beautifully, and most of all, she had the voice of an angel. She was also an incredible mother to my brother and I. I am profoundly deaf and use sign language interpreters at school. When my parents found out that I was deaf, she labored with so much love and determination to teach me sign language, and eventually, how to talk. If it weren't for her, I would have never ended up where I am today, the only deaf student at Johns Hopkins University.

I am often asked how we managed to raise over $25,000 for the two Overnights. It was because of who she was. A vibrant, beautiful, and loving woman. This is why I participate in the Overnight and will continue to do so. I volunteer for AFSP as a field advocate, pushing for change on Capitol Hill. I participate in the fight to prevent suffering individuals from going through the struggle by themselves and to honor my mother by showing the person she was, fighting the stigma that is often attached with suicide. Like Melissa said, "my mom was an extraordinary woman whose end does not define her."

But I will always struggle with the loss of my mother, my confidante, my best friend. Her birthday will always be forever engrained in my mind, marking a year she missed with us, a year she didn't get to live her life. I will never forget her death anniversary either. The pain and thoughts she was feeling that day. How I never got to say goodbye. Why it had to happen on the day I was coming home, out of all days ... and how I will never know for the rest of my life.

Most of all, I will always be someone who has lost a loved one to suicide. A daughter without a mother. But I am not alone.

As we completed our walk at 5 a.m., we walked through a very long sidewalk that seemed to never end: we were surrounded by so many flickering luminarias in the dark, each to represent a lost loved one or one's ongoing struggle with suicide. I came across my mom's luminaria. I stood there, looking down at her smiling photo. I felt a deep loneliness with her no longer here with me. I broke down into tears and sat down next to her, alone, amongst passers-by. After a few moments, I realized, I am not alone. I am surrounded by thousands of others who are all bonded by the same mission: to bring the light out of the darkness. Others have also experienced the grief, confusion, and pain that my family and I went and still go through. Others have also experienced the struggle and suffering that my mom went through. I was not alone.

I stood up with a new strength. And I turned around, to see Michel duCille, three-time photography recipient of the Pulitzer Prize from the Washington Post. He had captured my moment.