Lorin Stein: 'He just seems to hear more and judge less than other writers'

Penguin Books released two John O'Hara books this month: short stories collected for the first time titled The New York Stories and a reissue of BUtterfield 8, the 1935 best-seller that became the film vehicle for Elizabeth Taylor's first Academy Award when it was adapted for the big screen in 1960. The movie was considered risqué for its time—Taylor's Gloria Wandrous is a model turned call girl who sleeps her way into love with a married man—but today it mostly feels like a lurid, accidentally campy soap opera. Bosley Crowther, the [New York Times] film critic at the time, said of it: "The ending is absurd. But so is most of it for that matter." And New Yorker film critic Pauline Kael famously derided it as a "garish mess." 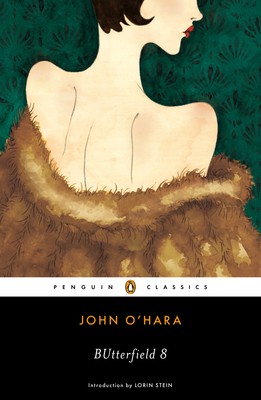 As the Variety review observes, however, the movie bears little resemblance to the novel, which remains a fascinating peak into the social and personal turmoil that people endure during an era of economic desperation. Lorin Stein, the editor of the Paris Review and a Johns Hopkins alumnus, calls it "one of the great novels of New York in the Depression" in his introduction to the Penguin reissue; a version of his essay ran on the New Yorker's Page Turner blog.

Stein's insightful consideration of both BUtterfield 8 and the often overlooked O'Hara arrives during a modest resurgence of interest in O'Hara's distinct attention to money, social status, and desire. A Slate article from 2011 calls BUtterfield 8 the perfect novel to describe America today, and O'Hara appreciation pieces recently appeared in the Chicago Tribune and the Los Angeles Times. For Stein, what makes O'Hara's writing so potent decades on is the honesty with which he transferred his thoughts and feelings about the people and world around him to the page. The Hub caught up with Stein by email to talk about O'Hara and how we think about and study literature.

In your introduction you note that on the subjects that matter most to O'Hara—class, sex, and alcohol—his novels "amount to a secret history of American life," and immediately follow that by calling him the most addictive of American novelists. Are his books and stories addictive for you because of his detail-oriented observations of the stuff people surrounded themselves with at the time, how what they filled their lives with provided the cushioning armor against the social conflicts that class, sex, and booze brought into their orbits?

What I mean is, let's say you wanted to know how people talked in bed in 1937. Not in the movies, not in polite literature or melodrama, but in real life. O'Hara tells you the truth. At least, he gives that impression. He just seems to hear more and judge less than other writers, and he has a kid's fascination with what the grown-ups are doing and saying behind closed doors. Whether it's a clubhouse, a speakeasy, a car, or a bedroom. Often, what the grown-ups are dealing with is class, sex, and booze.

You refreshingly equate O'Hara's downright emotional awareness of such stuff with tackiness, and deem this his advantage over his "respectable" contemporaries—that he's tacky enough to notice how class differences feel and writes it down. I appreciate the example you use to illustrate this point: a lunchtime conversation between two men. It's seemingly so innocuous and, well, the 1930s being the 1930s, when novels wanted to discuss class it was often done with a more overt brio, like in Horace McCoy's They Shoot Horses, Don't They? or Nathaniel West's Miss Lonelyhearts. O'Hara places it in a situation that's common—does that add to the tackiness? The fact that he's bringing up class in such a mundane way?

I don't think O'Hara could tie his shoe without thinking about class. He sees it everywhere. That, incidentally, doesn't make him special as a writer—in fact, a lot of popular fiction is baldly interested in how people show status. Think of Danielle Steel or Tom Wolfe, or Fifty Shades of Grey. O'Hara just happens to be working with a microscope, or maybe a stethoscope. He sees and feels the damage all around him, and it doesn't turn his people into cartoons.

I also appreciated your observation that sex in O'Hara's work is treated as a human fact, and that BUtterfield 8's Gloria Wandrous is a sexual subject, not object. You praise the frankness he uses when telling Gloria's sexual history in the novel—the remembrance of her being "corrupted" by a man old enough to be her father, which requires the introduction of her uncle, William R. Vandamm, with the parenthetical "R for Robespierre," just kills me every time I read it—as an honesty that remains rare today. So, just curious: why do you think writing about sexuality honestly is so difficult when he makes it look so matter-of-fact?

I wish I knew! I suppose maybe this goes back to O'Hara's shamelessness, or tackiness, or childlikeness, or whatever we ought to call it. For all his snobbery, he was in some ways deeply accepting of human nature as he found it. And you know, it's not just that he was frank about sex—he is equally frank, and sensitive, when he describes the romance between Gloria and Eddie, who never sleep together. O'Hara was simply very, very interested in the ways people desire one another.

What I've most enjoyed about rereading BUtterfield 8 and reading a number of his stories for the first time is that it got me thinking about 1930s fiction, and I always forget how many things I like from the decade. There's the then popular works that have become reading list material (Buck's The Good Earth, Ferber's Cimarron, Steinbeck's Of Mice and Men and The Grapes of Wrath), a whole mess of crime fiction (Hammett's The Glass Key, Simenon produced his first Maigret novels, Chandler's The Big Sleep), so-called serious literature (Faulkner's As I Lay Dying, Dos Passos' U.S.A. Trilogy, Malcolm Lowry's Ultramarine, Djuna Barnes' Nightwood, Hemingway's To Have and Have Not, Dinesen's Out of Africa, Huxley's Brave New World, Beckett's Murphy, O'Brien's At Swim-Two-Birds, Sartre's Nausea), and so much more. Wodehouse alone probably wrote 10,000 shorts during the decade. Burroughs' Tarzan books came out at a steady clip, people were still writing books in Baum's Oz fantasy series, Gone With the Wind, and that WWI veteran turned English professor wrote The Hobbit that worked out pretty well for him. And there are still lesser-known works—Henry Roth's Call it Sleep, Joseph Roth's Radetsky March, Svetoslav Minkov's absurdly entertaining satire The Lady With the X-Ray Eyes—waiting to be rediscovered, like O'Hara. Though I always thought movies and radio were the most popular American entertainments during the decade, I forget that the decade was really novel-rich, too. Might the 1930s be an overlooked literary decade, sandwiched as it is between the modernist enterprises of the first third of the century and the various postwar activities?

You said it. When we study literary history, it's easy to get hung up on "groundbreakers," on little "generations"—which are usually ways of talking about two or three writers—and on reductive trends, as if everyone in the '30s had been writing about factory strikes. (Malcolm Cowley debunked that particular myth in his 1954 study The Literary Situation.) The thing is, that's not how literature has ever actually worked—not now and especially not then. As your list suggests, fiction was still a mass entertainment in the 1930s. You had a large, sophisticated readership and plenty of brilliant writers for whom fiction was still a serious way of thinking about life. It would be weird if there weren't a huge variety of books, many of them wonderful. For what it's worth, I think we could cook up great reading lists for later decades, too. The early '80s, for example, were a great time to be a fiction junkie. To read a syllabus nowadays, you might think it was all Raymond Carver.