For JHU graduate student, a dream job at baseball's Hall of Fame

She was one of 15 selected for internship at Cooperstown museum 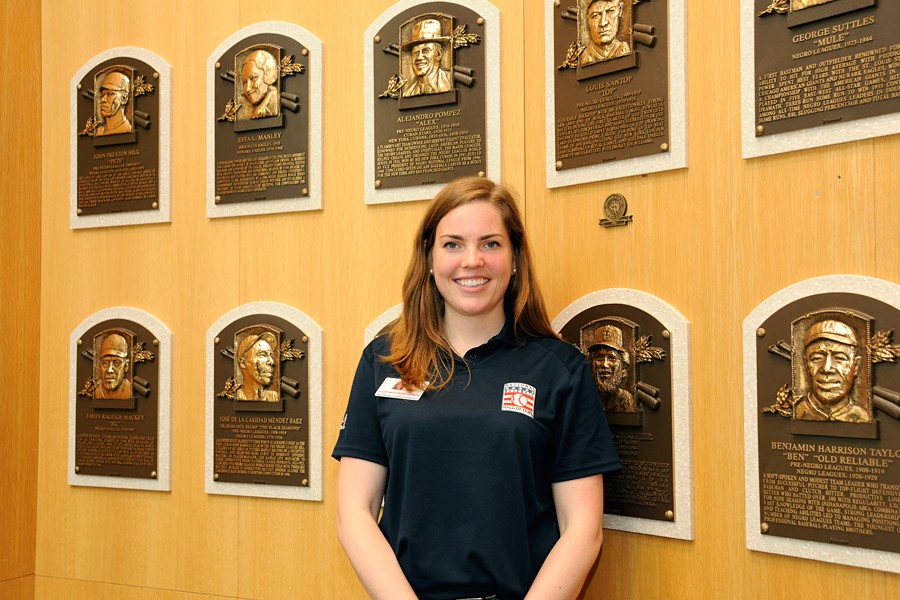 Image caption: Claire Berge, a graduate student in the Museum Studies program at Johns Hopkins, is completing a summer internship at the National Baseball Hall of Fame in Cooperstown, N.Y.

Each weekday morning, Claire Berge walks through the National Baseball Hall of Fame and Museum's plaque gallery on the way to her office.

The museum's halls are quiet then, she says, and the early morning sun shines on the Hall of Fame's first class of inductees, baseball greats such as Babe Ruth, Ty Cobb, Honus Wagner, and Christy Mathewson.

"It's not a view everyone gets to see," says Berge, a graduate student in Museum Studies in the Krieger School's Advanced Academic Programs. "It's incredible."

Berge was one of 15 students selected by the Hall of Fame for its summer internship program. Now in its 13th year, the Frank and Peggy Steele Internship Program for Youth Leadership Development program offers undergraduate and graduate students an opportunity to work alongside museum and library staff to gain hands-on training in a field that closely matches the student's major.

For Berge, a sports fan and American history buff, the opportunity to work at the Cooperstown, N.Y., museum was a dream summer job.

"Getting a behind-the-scenes look at the operation of one of the nation's best-loved museums is an exceptional opportunity, especially for a Museum Studies student," she says.

As a public programming intern in the museum's education department, Berge develops and implements programs of all kinds, including historical theater presentations, guided tours, and learning center experiences. She began the internship in early June. The first two weeks, she says, were dedicated to learning the content of the museum's programs and getting steeped in baseball lore.

"My first day here I was a deer in headlights. This is a very big museum, and there was a lot to learn," says Berge, a Minnesota native and Twins fan. "They gave us tours of the collection and the library to see how the museum works."

Since then, Berge has had the opportunity to create her own programs and assume a larger role in the presentation of daily programming. She helped organize a youth baseball tournament at Cooperstown's Dreams Park, and she developed a theatrical presentation titled "Baseball and the Greatest Generation," which addresses the impact of World War II on baseball. She talks about major leaguers who served—including Stan Musial, Pee Wee Reese, and Hank Greenberg—and how women were involved in the All-American Girls Professional Baseball League (popularized in the film A League of Their Own). For the presentations, Berge dresses as Rosy the Riveter and performs live in front of museum visitors.

Berge earned her bachelor's degree in history and German studies from Macalester College in St. Paul, Minn., in 2010. After graduation, she worked as a development coordinator at a small nonprofit in St. Paul, then as a trade sales and marketing coordinator for a children's book publishing company in Minneapolis.

"But I've been interested in museum studies for a while. It was my mom who learned about the Museum Studies program at Johns Hopkins, and I didn't hesitate to apply," Berge says of the program, which she is completing online.

Berge and other interns will help staff the 2013 Hall of Fame Induction Weekend, which begins Friday. She will be stationed at the Clark Sports Center, site of the ceremony, to answer visitor's questions and distribute water, programs, and fans. More than 40 Hall of Famers are expected to attend the ceremonies, including one of Berge's favorite all-time Twins, Bert Blyleven.

For her last few weeks at the museum, she will spearhead an evaluation project that will involve timing and tracking museum visitors and short exit interviews.

When asked how much baseball history she's absorbed to date, Berge says "a ton." "I'm going to be great at baseball trivia," she adds.